Stock Photos
Bodyboarding is a water sport in which the surfer rides a bodyboard on the crest, face, and curl of a wave which is carrying the surfer towards the shore. Bodyboarding is also referred to as Boogieboarding due to the invention of the "Boogie Board" by Tom Morey in 1971.The average bodyboard consists of a short, rectangular piece of hydrodynamic foam. Bodyboarders typically use swim fins for additional propulsion and control while riding a breaking wave. 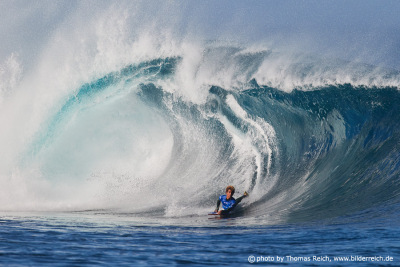 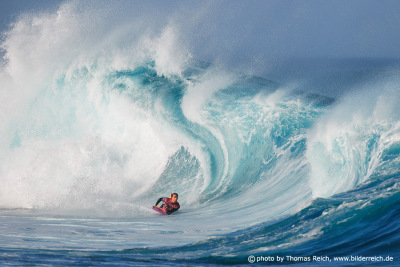 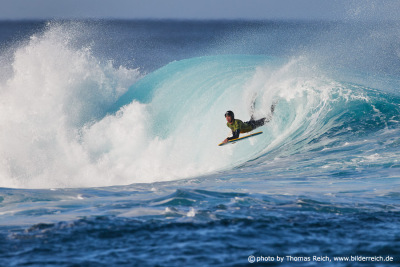 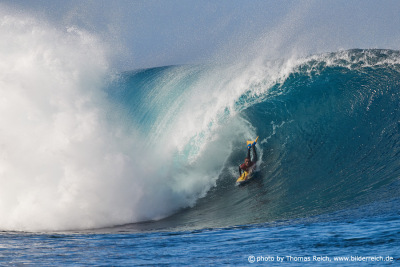 Bodyboarding originates from an ancient form of riding waves (surfing) on one's belly. Indigenous Polynesians rode "alaia" (pronounced ah-lie-ah) boards either on their belly, knees, or feet (in rare instances). Alaia boards were generally made from the wood of Acacia koa and varied in length and shape. They are distinct from the modern stand-up surfboards in that they had no ventral fins. Captain Cook recorded seeing Hawaiian villagers riding such boards when he came to Hawaii in 1778.

The boards he witnessed were about 90 to 180 cm (3 to 6 ft) and were ridden prone (on the belly) or on the knees. Alaia boards then evolved into the more modern "paipo" (pronounced pipe-oh) board. Paipo boards were either made of wood or fiberglass. Fiberglass boards usually had fins on the bottom. Tom Morey hybridized this form of riding waves on one's belly on a paipo to his craft of shaping stand-up surfboards.

This text is based on the article Bodyboarding from the free encyclopedia Wikipedia and is licensed under the Creative Commons CC-BY-SA 3.0 Unported (short version). A list of the authors is available on Wikipedia.