Stock Photos
The crested lark (Galerida cristata) is a species of lark distinguished from the other 81 species of lark by the crest of feathers that rise up in territorial or courtship displays and when singing. Common to mainland Europe, the birds can also be found in northern Africa and in parts of western Asia and China. It is a non-migratory bird, but can occasionally be found as a vagrant in Great Britain.

A fairly small lark, the crested lark is roughly the same size as a Eurasian skylark, but shorter overall and bulkier around the head and body, and very similar in appearance, with a height of 17 cm (6.7 in) and a wingspan of 29 to 38 cm (11 to 15 in), weighing between 37 and 55 g (1.3 and 1.9 oz). It is a small, brown bird which has a short tail with light brown outer feathers. Male and females have no real differences, but young crested larks have more spots on their back than their older counterparts. Its plumage is downy but sparse and appears whitish. The distinct crest from which the crested lark gets its name is conspicuous at all times but is more pronounced during territorial or courtship displays and when singing. In flight it shows reddish underwings. It shares many characteristics with the Thekla lark, with the main distinctions between the two being the beak, the Thekla's heavier black-brown streaks and its grey underwing, present in European specimens. 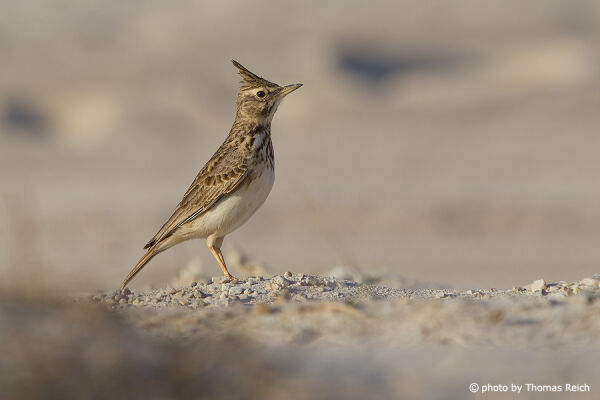 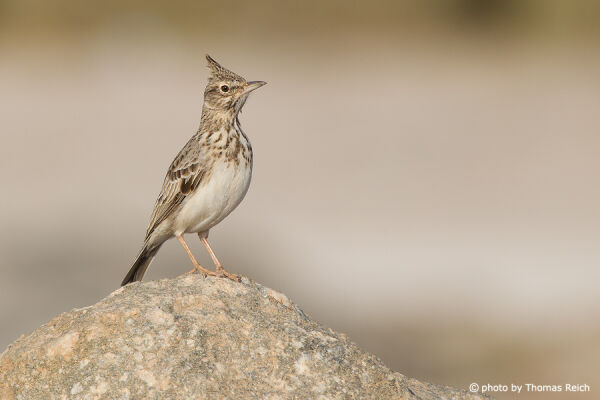 The crested lark is a songbird, and has a liquid, warbling song described onomatopoeically as a whee-whee-wheeoo or a twee-tee-too. It sings in flight from high in the sky, at roughly 30 to 60 m (98 to 197 ft) above the ground. The related Eurasian skylark exhibits similar behaviour but also sings during its ascent, whereas the crested lark sings either at altitude or on the ground. Their flight pattern is an example of undulatory locomotion.

The crested lark breeds across most of temperate Eurasia from Portugal to north-eastern China and eastern India, and in Africa south to Niger. It is non-migratory, and the sedentary nature of this species is illustrated by the fact that it is only a very rare vagrant to Great Britain, despite breeding as close as northern France. While the bird is not commonly found in Scandinavia today, it could be found in Sweden until the 1990s, with sources reporting six individual birds in 1992 before becoming extirpated in Sweden in 1993. The birds have also been extirpated in several other European countries, including Norway (1972), Luxembourg (1973) and Switzerland (1980s).

This is a common bird of dry, open country and is often seen by roadsides or in cereal fields, although it is also found occupying small, sandy patches by railways, docks and airfields.

Largely vegetarian birds, the crested lark primarily feeds on grains and seeds, such as oats, wheat and barley, but will also eat insects, particularly beetles, with food either being scavenged from the ground or dug up. Juvenile birds are fed by both parents, and generally leave the nest before they are able to fly to start foraging for food themselves.

It nests in small depressions in the ground, often in wastelands and on the outskirts of towns. The nests are untidy structures composed primarily of dead grasses and roots. Three to five brown, finely speckled eggs, similar to those of the Eurasian skylark, are laid at a time and will hatch after 11–12 days. As with most larks, the chicks leave the nest early, after about eight days and take flight after reaching 15–16 days old. Two broods will usually be raised each year.

This text is based on the article Crested lark from the free encyclopedia Wikipedia and is licensed under the Creative Commons CC-BY-SA 3.0 Unported (short version). A list of the authors is available on Wikipedia.