Stock Photos
The bluethroat (Luscinia svecica) is a small passerine bird that was formerly classed as a member of the thrush family Turdidae, but is now more generally considered to be an Old World flycatcher, Muscicapidae. It, and similar small European species, are often called chats.

The bluethroat is similar in size to the European robin at 13–14 cm. It is plain brown above except for the distinctive black tail with red side patches. It has a strong white supercilium. The male has an iridescent blue bib edged below with successive black, white and rust coloured borders. Some races, such as L. svecica svecica (red-spotted bluethroat) of northern Eurasia, have a red spot in the centre of the blue bib.
Others, such as L. svecica cyanecula (white-spotted bluethroat) of southern and central Europe, have a white spot in the centre of the blue bib. L. svecica magna in Turkey has no central spot. Females of all races usually have just a blackish crescent on an otherwise cream throat and breast. Newly fledged juveniles are freckled and spotted dark brown above. Despite the distinctive appearance of the males, recent genetic studies show only limited variation between the forms, and confirm that this is a single species. Moults begins in July after breeding and is completed in 40–45 days, before the birds migrate. 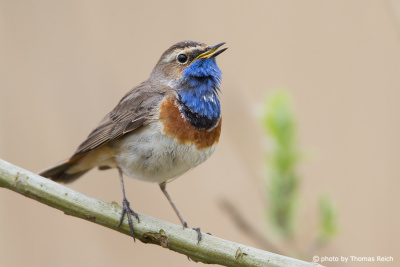 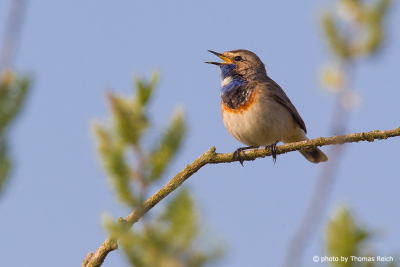 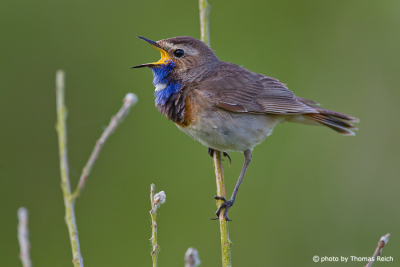 he male has a varied and very imitative song. Its call is a typical chat chack noise.

It is a migratory insectivorous species breeding in wet birch wood or bushy swamp in Europe and across the Palearctic with a foothold in western Alaska. It winters in north Africa and the Indian subcontinent.

It nests in tussocks or low in dense bushes.

This text is based on the article Bluethroat from the free encyclopedia Wikipedia and is licensed under the Creative Commons CC-BY-SA 3.0 Unported (short version). A list of the authors is available on Wikipedia.