Stock Photos
The common swift (Apus apus) is a medium-sized bird, superficially similar to the barn swallow or house martin but somewhat larger, though not stemming from those passerine species, being in the order Apodiformes. The resemblances between the groups are due to convergent evolution, reflecting similar contextual development. The swifts' nearest relatives are the New World hummingbirds and the Southeast Asian treeswifts.

Its scientific name Apus is Latin for a swift, thought by the ancients to be a type of swallow with no feet (from Ancient Greek α, a, "without", and πούς, pous, "foot").

Swifts have very short legs which they use primarily for clinging to vertical surfaces (hence the German name Mauersegler, literally meaning "wall-glider"). They never settle voluntarily on the ground, where they would be vulnerable to accidents and predation, and non-breeding individuals may spend up to ten months in continuous flight.

Common swifts are 16–17 cm (6.3–6.7 in) long with a wingspan of 38–40 cm (15–16 in)[7] and entirely blackish-brown except for a small white or pale grey patch on their chins which is not visible from a distance. They have a short forked tail and very long swept-back wings that resemble a crescent or a boomerang.

Their call is a loud scream in two different tone pitches, the higher of which issues from the female. They often form 'screaming parties' during summer evenings, when 10–20 swifts will gather in flight around their nesting area, calling out and being answered by nesting swifts. Larger "screaming parties" are formed at higher altitudes, especially late in the breeding season. The purpose of these parties is uncertain, but may include ascending to sleep on the wing, while still breeding adults tend to spend the night in the nest.Tracking swifts at their breeding colonies using radar has revealed that individuals often occur in flocks during dawn ascent and dawn descent but not during dawn ascent and dusk descent, suggesting that this flocking benefits the swifts via cue acquisition and information exchange between individuals or through extending social behaviour. 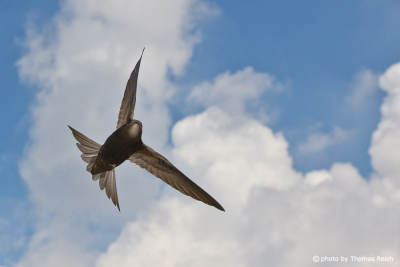 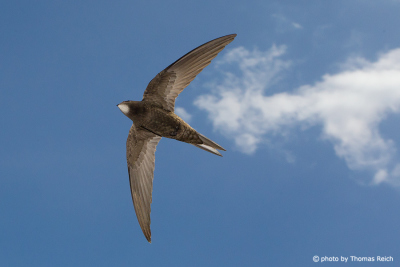 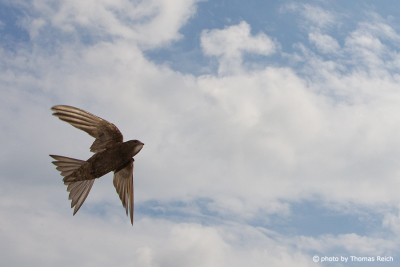 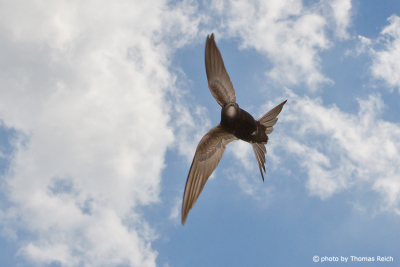 Swifts may nest in former woodpecker tree burrows found in ancient forests, such as some 600 reported nesting in the Białowieża Forest of North Eastern Poland, or the small colony found in a combination of woodpecker holes and tree nestboxes on the RSPB's reserve at the Caledonian Forest in Abernethy, Scotland. While tree holes and cliffs may have comprised their historic nesting resource, the almost complete removal of ancient forest from their nesting range has resulted in adaptation to man-made sites. Swifts build their nests of air-borne material caught in flight, bonded with their saliva, in suitable buildings hollows, such as under tiles, in gaps beneath window sills, and most typically under eaves and within gables.

Swifts form pairs that may couple for years, and often return to the same nesting site and partner year after year, repairing degradation suffered in their 40-week migratory absence. Insects such as clothes moths, carpet and larder beetles may consume all but the most indigestible nest elements, typically feather shafts.

Young nesting swifts are able to survive for a few days without food by dropping their body temperature and metabolic rate, entering a torpid state.

Except when nesting, swifts spend their lives in the air, living on the insects caught in flight; they drink, feed, and often mate and sleep on the wing. Some individuals go 10 months without landing. No other bird spends as much of its life in flight. Their maximum horizontal flying speed is 111.6 km/h. Over a lifetime they can cover millions of kilometers.

Feeding parties can be very large in insect-rich areas, such as wetlands. Reports of as many as 2000 swifts feeding over flooded gravel pits, lakes and marshy river deltas are not uncommon, and may represent an ingress of swifts from within as much as a 100 km (62 mi) radius; swifts nesting in Western Scotland are thought to venture to Lough Neagh in Northern Ireland to feed on the abundant and nutritious "Lough Neagh Fly"

Common swifts are migratory. Their summer breeding range runs from Portugal and Ireland in the West across to China and Siberia in the East. They breed as far south as Northern Africa (in Morocco and Algeria), with a presence in the Middle East in Israel, Lebanon and Syria, the Near East across Turkey, and the whole of Europe as far north as Norway, Finland, and most of sub-Arctic Russia. Swifts migrate to Africa by a variety of routes, ending up in Equatorial and Sub-Equatorial Africa, excluding the Cape. Common swifts do not breed on the Indian Subcontinent.

Subjects of a geolocator tracking study demonstrated that swifts breeding in Sweden winter in the Congo region of Africa. Swifts spend three to three-and-a-half months in Africa and a similar time breeding - the rest is spent on the wing, flying home or away. Unsuccessful breeders, fledglings, and sexually immature year-old birds are the first to leave their breeding area. Breeding males follow next, and finally the breeding females. The breeding females stay longer in the nest to rebuild their fat reserves. The time of departure is often determined by the light cycle, and begins at the first day of less than 17 hours light. For this reason, birds further north, for instance in Finland, leave later in the second half of August. These latecomers are rushed through the quickly shortening days in Central Europe and are barely seen by bird watchers.

The prevailing direction of travel through Central Europe is south-by-southwest, and so the Alps do not present a barrier. In bad weather, the swifts follow rivers, because they can find a better food supply there. The population of Western and Central Europe traverses the Iberian peninsula and northwestern Africa. Swifts from Russia and southeastern Europe made a long journey over the eastern part of the Mediterranean. It is unclear where the two groups meet. The western group of swifts mostly follow the Atlantic coastline of Africa—otherwise they would have to cross the Sahara. Once they arrive at the humid savanna, they turn southeast to arrive at their winter feeding grounds. During the summer in Africa, there is a great bounty of insects for the swifts, since the region lies in the Intertropical Convergence Zone. The swifts have a nearly unbroken presence in the sky.

A few swifts, usually some of the sexually immature one year olds, remain in Africa. The majority fly northwards through Africa, then turn east towards their destinations. The birds use low pressure fronts during their spring migrations to exploit the southwestern flow of warm air, and on the return trip, ride northeastern winds on the back of the low pressure fronts.

In Central Europe, the swifts return in the second half of April and the first third of May, and like to stay in lowlands and near water rather than in high places. In more northerly regions, the swifts arrive later. The weather along the journey has an enormous influence on the arrival date, so in one region the swifts may come back at varying times year to year.

Common swifts nest in a wider variety of sites than any other species of Apus. Swifts usually nest in buildings but they can also be found nesting in holes in trees, cliffs and crevices, and even in nestboxes. Swifts usually enter their nesting holes with direct flight, and take-off is characterized by an initial free-fall. Empty cavities are shallower than those with nests, and the entry size is smaller in the former than in the latter.

This text is based on the article Common swift from the free encyclopedia Wikipedia and is licensed under the Creative Commons CC-BY-SA 3.0 Unported (short version). A list of the authors is available on Wikipedia.