Stock Photos
The common cuckoo (Cuculus canorus) is a member of the cuckoo order of birds, Cuculiformes, which includes the roadrunners, the anis and the coucals.

This species is a widespread summer migrant to Europe and Asia, and winters in Africa. It is a brood parasite, which means it lays eggs in the nests of other bird species, particularly of dunnocks, meadow pipits, and reed warblers. Although its eggs are larger than those of its hosts, the eggs in each type of host nest resemble the host's eggs. The adult too is a mimic, in its case of the sparrowhawk; since that species is a predator, the mimicry gives the female time to lay her eggs without being seen to do so.

The common cuckoo is 32–34 centimetres (13–13 in) long from bill to tail (with a tail of 13–15 centimetres (5.1–5.9 in) and a wingspan of 55–60 centimetres (22–24 in). The legs are short. It has a greyish, slender body and long tail, similar to a sparrowhawk in flight, where the wingbeats are regular. During the breeding season, common cuckoos often settle on an open perch with drooped wings and raised tail. There is a rufous colour morph, which occurs occasionally in adult females but more often in juveniles. 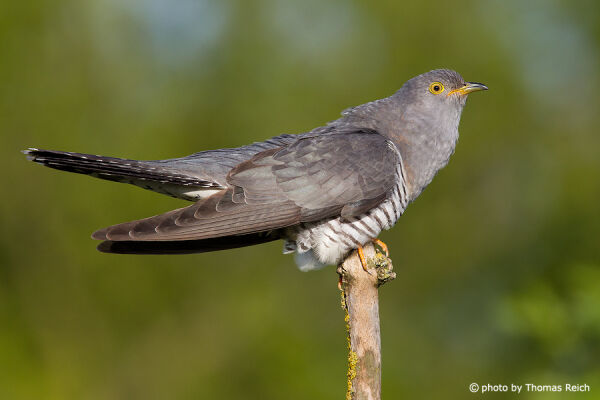 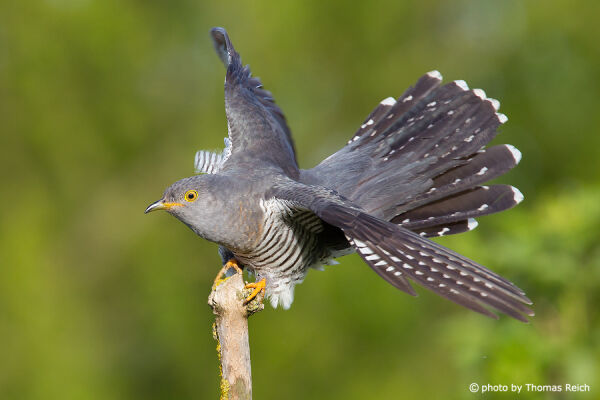 All adult males are slate-grey; the grey throat extends well down the bird's breast with a sharp demarcation to the barred underparts. The iris, orbital ring, the base of the bill and feet are yellow. Grey adult females have a pinkish-buff or buff background to the barring and neck sides, and sometimes small rufous spots on the median and greater coverts and the outer webs of the secondary feathers.

Rufous morph adult females have reddish-brown upperparts with dark grey or black bars. The black upperpart bars are narrower than the rufous bars, as opposed to rufous juvenile birds, where the black bars are broader.

Common cuckoos in their first autumn have variable plumage. Some have strongly-barred chestnut-brown upperparts, while others are plain grey. Rufous-brown birds have heavily barred upperparts with some feathers edged with creamy-white. All have whitish edges to the upper wing-coverts and primaries. The secondaries and greater coverts have chestnut bars or spots. In spring, birds hatched in the previous year may retain some barred secondaries and wing-coverts. The most obvious identification features of juvenile common cuckoos are the white nape patch and white feather fringes.

Common cuckoos moult twice a year: a partial moult in summer and a complete moult in winter. Males weigh around 130 grams (4.6 oz) and females 110 grams (3.9 oz). The common cuckoo looks very similar to the Oriental cuckoo, which is slightly shorter-winged on average.

The male's song, goo-ko, is usually given from an open perch. During the breeding season the male typically gives this vocalisation with intervals of 1–1.5 seconds, in groups of 10–20 with a rest of a few seconds between groups. The female has a loud bubbling call. The song starts as a descending minor third early in the year in April, and the interval gets wider, through a major third to a fourth as the season progresses, and in June the cuckoo "forgets its tune" and may make other calls such as ascending intervals. The wings are drooped when calling intensely and when in the vicinity of a potential female, the male often wags its tail from side to side or the body may pivot from side to side.

Essentially a bird of open land, the common cuckoo is a widespread summer migrant to Europe and Asia, and winters in Africa. Birds arrive in Europe in April and leave in September.The common cuckoo has also occurred as a vagrant in countries including Barbados, the United States, Greenland, the Faroe Islands, Iceland, Indonesia, Palau, Seychelles, Taiwan and China. Between 1995 and 2015, the distribution of cuckoos within the UK has shifted towards the north, with a decline by 69% in England but an increase by 33% in Scotland.

The common cuckoo's diet consists of insects, with hairy caterpillars, which are distasteful to many birds, being a specialty of preference. It also occasionally eats eggs and chicks.

The common cuckoo is an obligate brood parasite; it lays its eggs in the nests of other birds. At the appropriate moment, the hen cuckoo flies down to the host's nest, pushes one egg out of the nest, lays an egg and flies off. The whole process takes about 10 seconds. A female may visit up to 50 nests during a breeding season. Common cuckoos first breed at the age of two years.

More than 100 host species have been recorded: meadow pipit, dunnock and Eurasian reed warbler are the most common hosts in northern Europe; garden warbler, meadow pipit, pied wagtail and European robin in central Europe; brambling and common redstart in Finland; and great reed warbler in Hungary.

Female common cuckoos are divided into gentes – groups of females favouring a particular host species' nest and laying eggs that match those of that species in color and pattern. Evidence from mitochondrial DNA analyses suggest that each gene may have multiple independent origins due to parasitism of specific hosts by different ancestors. One hypothesis for the inheritance of egg appearance mimicry is that this trait is inherited from the female only, suggesting that it is carried on the sex-determining W chromosome (females are WZ, males ZZ). A genetic analysis of gentes supports this proposal by finding significant differentiation in mitochondrial DNA, but not in microsatellite DNA. A second proposal for the inheritance of this trait is that the genes controlling egg characteristics are carried on autosomes rather than just the W chromosome. Another genetic analysis of sympatric gentes supports this second proposal by finding significant genetic differentiation in both microsatellite DNA and mitochondrial DNA. Considering the tendency for common cuckoo males to mate with multiple females and produce offspring raised by more than one host species, it appears as though males do not contribute to the maintenance of common cuckoo gentes. However, it was found that only nine percent of offspring were raised outside of their father's presumed host species. Therefore, both males and females may contribute to the maintenance of common cuckoo egg mimicry polymorphism. It is notable that most non-parasitic cuckoo species lay white eggs, like most non-passerines other than ground-nesters.

As the common cuckoo evolves to lay eggs that better imitate the host's eggs, the host species adapts and is more able to distinguish the cuckoo egg. A study of 248 common cuckoo and host eggs demonstrated that female cuckoos that parasitised common redstart nests laid eggs that matched better than those that targeted dunnocks. Spectroscopy was used to model how the host species saw the cuckoo eggs. Cuckoos that target dunnock nests lay white, brown-speckled eggs, in contrast to the dunnock's own blue eggs. The theory suggests that common redstarts have been parasitised by common cuckoos for longer, and so have evolved to be better than the dunnocks at noticing the cuckoo eggs. The cuckoo, over time, has needed to evolve more accurate mimicking eggs to successfully parasitise the redstart. In contrast, cuckoos do not seem to have experienced evolutionary pressure to develop eggs which closely mimic the dunnock's, as dunnocks do not seem to be able to distinguish between the two species' eggs, despite the significant colour differences. The dunnock's inability to distinguish the eggs suggests that they have not been parasitised for very long, and have not yet evolved defences against it, unlike the redstart.

It was found that nests close to cuckoo perches were most vulnerable: multiple parasitised nests were closest to the vantage points, and unparasitised nests were farthest away. Nearly all the nests "in close vicinity" to the vantage points were parasitised. More visible nests were more likely to be selected by the common cuckoos. Female cuckoos use their vantage points to watch for potential hosts and find it easier to locate the more visible nests while they are egg-laying,[20] however, novel studies highlight that host alarm calls might also play an important role during nest searching.

The great reed warblers' responses to the common cuckoo eggs varied: 66% accepted the egg(s); 12% ejected them; 20% abandoned the nests entirely; 2% buried the eggs. 28% of the cuckoo eggs were described as "almost perfect" in their mimesis of the host eggs, and the warblers rejected "poorly mimetic" cuckoo eggs more often. The degree of mimicry made it difficult for both the great reed warblers and the observers to tell the eggs apart.

The egg measures 22 by 16 millimetres (0.87 in × 0.63 in) and weighs 3.2 grams (0.11 oz), of which 7% is shell. Research has shown that the female common cuckoo is able to keep its egg inside its body for an extra 24 hours before laying it in a host's nest. This means the cuckoo chick can hatch before the host's chicks do, and it can eject the unhatched eggs from the nest. Scientists incubated common cuckoo eggs for 24 hours at the bird's body temperature of 40 °C (104 °F), and examined the embryos, which were found "much more advanced" than those of other species studied. The idea of 'internal incubation' was first put forward in 1802 and 18th and 19th Century egg collectors had reported finding that cuckoo embryos were more advanced than those of the host species.

The naked, altricial chick hatches after 11–13 days. It methodically evicts all host progeny from host nests. It is a much larger bird than its hosts, and needs to monopolize the food supplied by the parents. The chick will roll the other eggs out of the nest by pushing them with its back over the edge. If the host's eggs hatch before the cuckoo's, the cuckoo chick will push the other chicks out of the nest in a similar way. At 14 days old, the common cuckoo chick is about three times the size of an adult Eurasian reed warbler.

Species whose broods are parasitised by the common cuckoo have evolved to discriminate against cuckoo eggs but not chicks. Experiments have shown that common cuckoo chicks persuade their host parents to feed them by making a rapid begging call that sounds "remarkably like a whole brood of host chicks." The researchers suggested that "the cuckoo needs vocal trickery to stimulate adequate care to compensate for the fact that it presents a visual stimulus of just one gape." However, a cuckoo chick needs the amount of food of a whole brood of host nestlings, and it struggles to elicit that much from the host parents with only the vocal stimulus. This may reflect a tradeoff—the cuckoo chick benefits from eviction by receiving all the food provided, but faces a cost in being the only one influencing feeding rate. For this reason, cuckoo chicks exploit host parental care by remaining with the host parent longer than host chicks do, both before and after fledging.

The common cuckoo's behaviour was firstly observed and described by Aristotle and the combination of behaviour and anatomical adaptation by Edward Jenner, who was elected as Fellow of the Royal Society in 1788 for this work rather than for his development of the smallpox vaccine. It was first documented on film in 1922 by Edgar Chance and Oliver G Pike, in their film 'The Cuckoo's Secret'.

A study in Japan found that young common cuckoos probably acquire species-specific feather lice from body-to-body contact with other cuckoos between the time of leaving the nest and returning to the breeding area in spring. A total of 21 nestlings were examined shortly before they left their hosts' nests and none carried feather lice. However, young birds returning to Japan for the first time were found just as likely as older individuals to be lousy.

This text is based on the article Common cuckoo from the free encyclopedia Wikipedia and is licensed under the Creative Commons CC-BY-SA 3.0 Unported (short version). A list of the authors is available on Wikipedia.