Stock Photos
The common reed bunting (Emberiza schoeniclus) is a passerine bird in the bunting family Emberizidae, a group now separated by most modern authors from the finches, Fringillidae. The genus name Emberiza is from Old German Embritz, a bunting. The specific schoeniclus is from Ancient Greek skhoiniklos, a now unknown waterside bird.

The common reed bunting is a medium-sized bird, 13.5–15.5 cm long, with a small but sturdy seed-eater's bill. The male has a black head and throat, white neck collar and underparts, and a heavily streaked brown back. The female is much duller, with a streaked brown head, and is more streaked below. The song of the male is a repetitive srip. 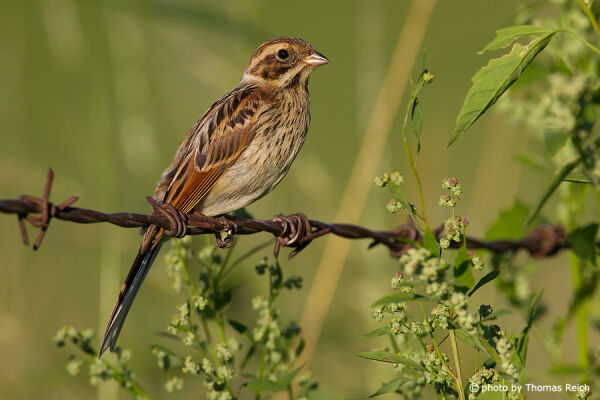 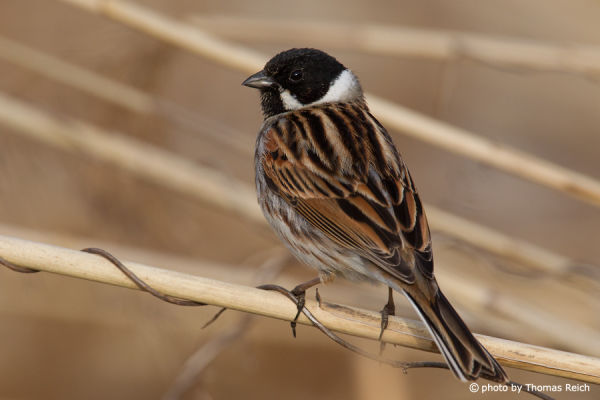 It breeds across Europe and much of the Palearctic. Most birds migrate south in winter, but those in the milder south and west of the range are resident. It is common in reedbeds and also breeds in drier open areas such as moorland and cultivation. For example, it is a component of the purple moor grass and rush pastures, a type of Biodiversity Action Plan habitat in the UK. It occurs on poorly drained neutral and acidic soils of the lowlands and upland fringe.

Its natural food consists of insects when feeding young, and otherwise seeds.

Breeding normally starts in early April, finishing in late August depending on location and altitude. The species is monogamous. The nest is built using twigs, grass and reeds lined with finer materials such as hair, moss and rootlets in a bush or reed tussock. 4–5 olive-grey eggs are laid, which show the hair-like markings characteristic of those of buntings. The incubation period is 12-15 days where the chicks are fed by both parents.

This text is based on the article Common reed bunting from the free encyclopedia Wikipedia and is licensed under the Creative Commons CC-BY-SA 3.0 Unported (short version). A list of the authors is available on Wikipedia.