Stock Photos
The Eurasian jay (Garrulus glandarius) is a species of bird occurring over a vast region from Western Europe and north-west Africa to the Indian Subcontinent and further to the eastern seaboard of Asia and down into south-east Asia. Across its vast range, several very distinct racial forms have evolved to look very different from each other, especially when forms at the extremes of its range are compared.

The bird is called jay, without any epithets, by English speakers in Great Britain and Ireland.

In order to keep its plumage free from parasites, it lies on top of anthills with spread wings and lets its feathers be sprayed with formic acid.
Similar to other corvids, Eurasian jays have been reported to plan for future needs. Male Eurasian Jays also take into account the desires of their partner when sharing food with her as a courtship ritual and when protecting food items from stealing conspecifics. 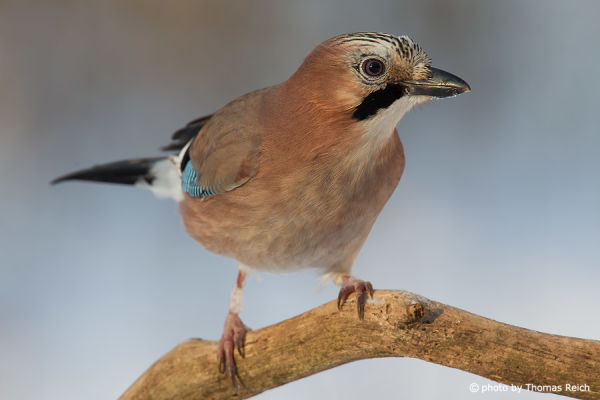 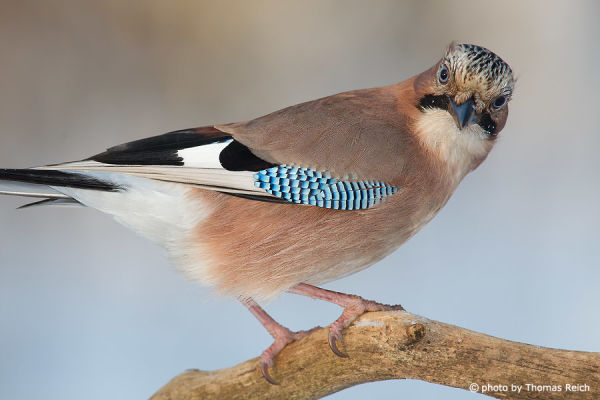 Its usual call is the alarm call which is a harsh, rasping screech and is used upon sighting various predatory animals, but the jay is well known for its mimicry, often sounding so like a different species that it is virtually impossible to distinguish its true identity unless the jay is seen. It will even imitate the sound of the bird it is attacking, such as a tawny owl, which it does if attacking during the day. However, the jay is a potential prey item for owls at night and other birds of prey such as goshawks and peregrines during the day.

A member of the widespread jay group, and about the size of the jackdaw, it inhabits mixed woodland, particularly with oaks, and is a habitual acorn hoarder. In recent years, the bird has begun to migrate into urban areas, possibly as a result of continued erosion of its woodland habitat. Before humans began planting the trees commercially on a wide scale, Eurasian jays were the main source of movement and propagation for the European oak (Q. robur), each bird having the ability to spread more than a thousand acorns each year. Eurasian jays will also bury the acorns of other oak species, and have been cited by the National Trust as a major propagator of the largest population of Holm oak (Q. ilex) in Northern Europe, situated in Ventnor on the Isle of Wight. Jays have been recorded carrying single acorns as far as 20 km, and are credited with the rapid northward spread of oaks following the last ice age.

Feeding in both trees and on the ground, it takes a wide range of invertebrates including many pest insects, acorns (oak seeds, which it buries for use during winter), beech and other seeds, fruits such as blackberries and rowan berries, young birds and eggs, bats, and small rodents. Like most species, the jay's diet changes with the seasons but is noteworthy for its prolific caching of food—especially oak acorns and beechnuts—for winter and spring. While caching occurs throughout the year, it is most intense in the autumn.

It nests in trees or large shrubs laying usually 4–6 eggs that hatch after 16–19 days and are fledged generally after 21–23 days. Both sexes typically feed the young.

This text is based on the article Eurasian jay from the free encyclopedia Wikipedia and is licensed under the Creative Commons CC-BY-SA 3.0 Unported (short version). A list of the authors is available on Wikipedia.