Stock Photos
The dunnock (Prunella modularis) is a small passerine, or perching bird, found throughout temperate Europe and into Asian Russia. Dunnocks have also been successfully introduced into New Zealand. It is by far the most widespread member of the accentor family, which otherwise consists of mountain species. Other common names of the dunnock include the hedge accentor, hedge sparrow, or hedge warbler.

A European robin-sized bird, the dunnock typically measures 13.5–14 cm (5.3–5.5 in) in length. It possesses a streaked back, somewhat resembling a small house sparrow. Like that species, the dunnock has a drab appearance which may have evolved to avoid predation. It is brownish underneath, and has a fine pointed bill. Adults have a grey head, and both sexes are similarly coloured. Unlike any similar sized small brown bird, dunnocks exhibit frequent wing flicking, especially when engaged in territorial disputes or when competing for mating rights. 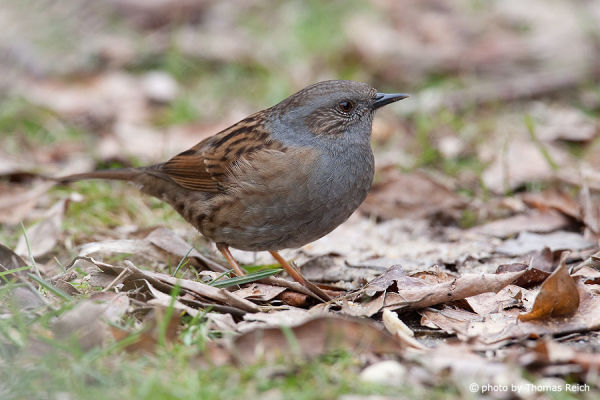 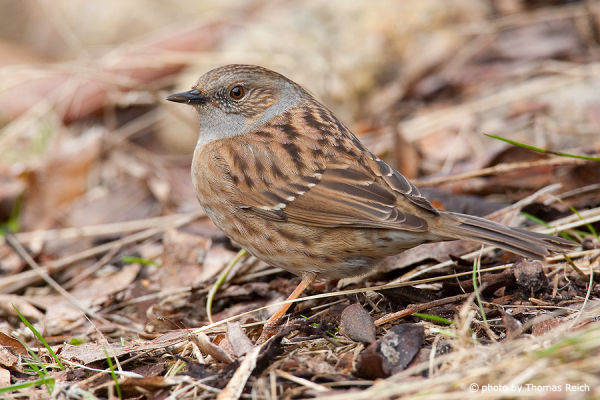 The main call of the dunnock is a shrill, persistent tseep along with a high trilling note, which betrays the bird's otherwise inconspicuous presence. The song is rapid, thin and tinkling, a sweet warble which can be confused with that of the Eurasian wren, but is shorter and weaker.

Dunnocks are native to large areas of Eurasia, inhabiting much of Europe including Lebanon, northern Iran, and the Caucasus. They are the only commonly found accentor in lowland areas; all the others inhabit upland areas. Dunnocks were successfully introduced into New Zealand during the 19th century, and are now widely distributed around the country and some offshore islands.

Favoured habitats include woodlands, shrubs, gardens, and hedgerows where they typically feed on the ground, often seeking out detritivores as food.

The dunnock possesses variable mating systems. Females are often polyandrous, breeding with two or more males at once, which is quite rare among birds. This multiple mating system leads to the development of sperm competition amongst the male suitors. DNA fingerprinting has shown that chicks within a brood often have different fathers, depending on the success of the males at monopolising the female. Males try to ensure their paternity by pecking at the cloaca of the female to stimulate ejection of rival males' sperm. Dunnocks take just one-tenth of a second to copulate and can mate more than 100 times a day. Males provide parental care in proportion to their mating success, so two males and a female can commonly be seen provisioning nestlings at one nest.

Other mating systems also exist within dunnock populations, depending on the ratio of male to females and the overlap of territories. When only one female and one male territory overlap, monogamy is preferred. Sometimes, two or three adjacent female territories overlap one male territory, and so polygyny is favored, with the male monopolising several females. Polygynandry also exists, in which two males jointly defend a territory containing several females. Polyandry, though, is the most common mating system of dunnocks found in nature. Depending on the population, males generally have the best reproductive success in polygynous populations, while females have the advantage during polyandry.

Studies have illustrated the fluidity of dunnock mating systems. When given food in abundance, female territory size is reduced drastically. Consequently, males can more easily monopolise the females. Thus, the mating system can be shifted from one that favours female success (polyandry), to one that promotes male success (monogamy, polygynandry, or polygyny).

The dunnock builds a neat nest (predominantly from twigs and moss and lined with soft materials such as wool or feathers), low in a bush or conifer, where adults typically lay three to five unspotted blue eggs.

Broods, depending on the population, can be raised by a lone female, multiple females with the part-time help of a male, multiple females with full-time help by a male, or by multiple females and multiple males. In pairs, the male and the female invest parental care at similar rates. However, in trios, the female and alpha male invest more care in chicks than does the beta male. In territories in which females are able to escape from males, both the alpha and beta males share provisioning equally. This last system represents the best case scenario for females, as it helps to ensure maximal care and the success of the young.

A study has found that males tend to not discriminate between their own young and those of another male in polyandrous or polygynandrous systems. However, they do vary their feeding depending on the certainty of paternity. If a male has greater access to a female, and therefore a higher chance of a successful fertilisation, during a specific mating period, it would provide more care towards the young.

This text is based on the article Dunnock from the free encyclopedia Wikipedia and is licensed under the Creative Commons CC-BY-SA 3.0 Unported (short version). A list of the authors is available on Wikipedia.