Greater white-fronted geese are 64–81 cm (25–32 in) in length, have a 130–165 cm (51–65 in) wingspan and weigh 1.93–3.31 kg (4.3–7.3 lb). They have bright orange legs and mouse-coloured upper wing-coverts. They are smaller than greylag geese. As well as being larger than the lesser white-fronted goose, the greater white-fronted goose lacks the yellow eye-ring of that species, and the white facial blaze does not extend upwards so far as in lesser.

The male is typical larger in size, both sexes are similar in appearance—greyish brown birds with light grey breasts dappled with dark brown to black blotches and bars. Both males and females also have a pinkish bill and orange legs and feet.

Greater white-fronted geese make a variation of sounds, but notably the most recognizable is the high pitched cackle that can be imitated by the sounds "he-he." There is a distinct breaking of the note from the first cackle to the second. 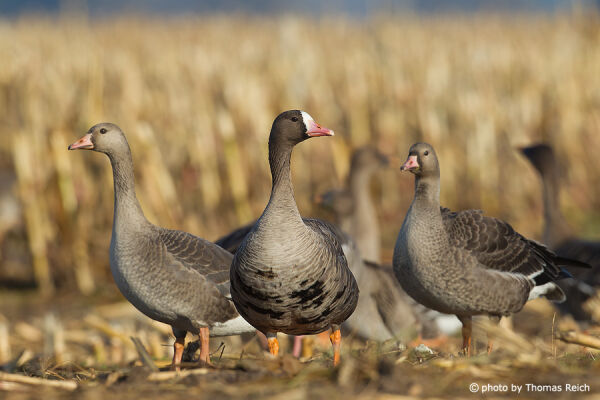 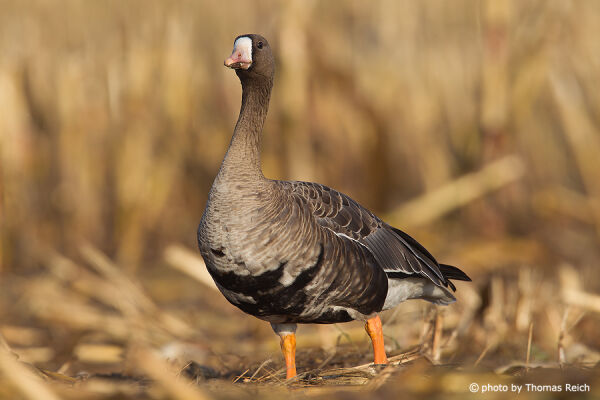 The North American midcontinent birds of the subspecies A. a. gambeli – which in 2010 had a fall population of about 710,000 birds – breeds from the Alaska North Slope across the western and central Canadian Arctic.[citation needed] The Pacific white-fronted goose of the American Pacific coast, which in 2010 numbered approximately 650,000 birds,[citation needed] and the tule geese, which are estimated to number 10,000 birds, nest in western Alaska. The midcontinent geese gather in early fall on the prairies of western Saskatchewan and eastern Alberta, spending several weeks feeding before heading to wintering areas near the Gulf of Mexico, into northern Mexico. The Pacific birds migrate south down the Pacific coast, staging primarily in the Klamath Basin of southern Oregon and northern California and wintering, eventually, in California's Central Valley. The tule goose is somewhat rare and has been since the latter half of the 19th century,presumably it was affected by destruction of its wintering habitat due to human settlement.

In the British Isles, two races overwinter: Greenland birds in Scotland and Ireland, and Russian birds in England and Wales. They gather on farmland at favoured traditional sites, with a famous flock gathering at WWT Slimbridge, Gloucestershire, England. Greenland birds also overwinter in Ireland and from late September and through the winter months, Ireland is home to almost 50% of the Greenland population of white-fronted geese.

A. a. albifrons and A. a. flavirostis are among the taxa to which the Agreement on the Conservation of African-Eurasian Migratory Waterbirds (AEWA) applies. 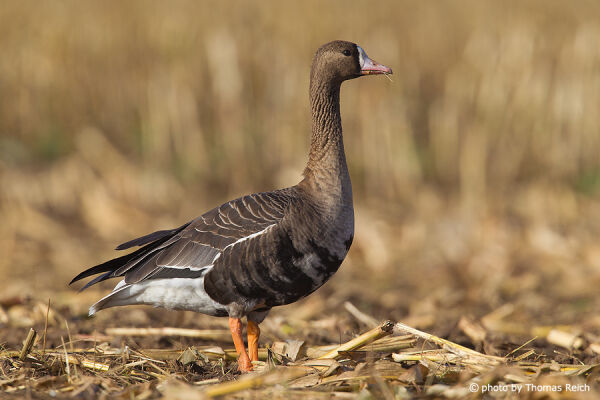 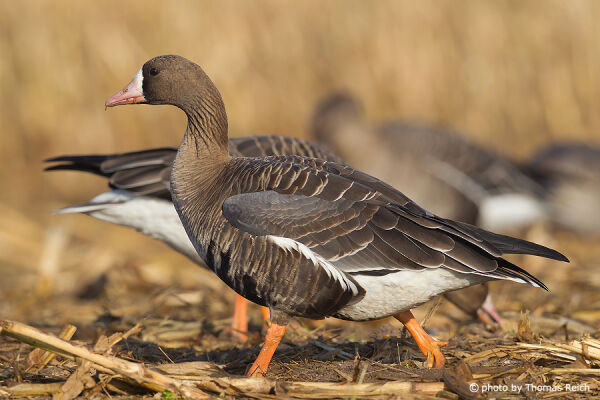 Weather conditions are a key factor in the annual breeding success of white-fronted geese. In the Arctic, the window of opportunity for nesting, incubating eggs, and raising a brood to flight state is open briefly, for about three months. Arriving in late May or early June, white-fronted geese begin departing for fall staging areas in early September. This means that a delayed snowmelt or late spring storm can significantly reduce the birds' reproductive success

This text is based on the article Greater white-fronted goose from the free encyclopedia Wikipedia and is licensed under the Creative Commons CC-BY-SA 3.0 Unported (short version). A list of the authors is available on Wikipedia.