This is one of several Sylvia species that has distinct male and female plumages. Both sexes are mainly brown above and buff below, with chestnut fringes to the secondary remiges. The adult male has a grey head and a white throat. The female lacks the grey head, and the throat is duller. The whitethroat's song is fast and scratchy, with a scolding tone. 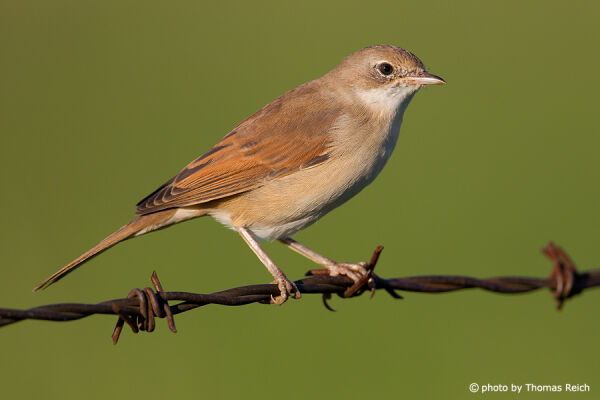 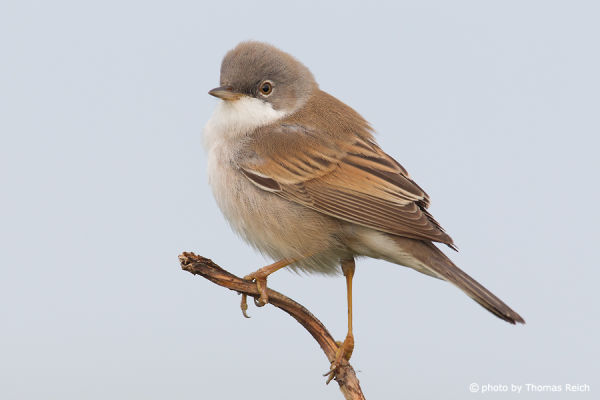 In Europe, western and eastern populations of common whitethroats have contrasting moulting and pre-migratory fueling strategies to capitilise on food supplies before departing their breeding and non-breeding grounds.

The hoarse, a little bit nasal call sounds like wed-wed or woid-woid. The warning cry is long-pulled, rough tschehr which resembles that of the Dartford warbler.

It breeds throughout Europe and across much of temperate western Asia. This small passerine bird is strongly migratory, and winters in tropical Africa, Arabia, and Pakistan. This is a bird of open country and cultivation, with bushes for nesting.

Like most warblers, it is insectivorous, but will also eat berries and other soft fruit.

The nest is built in low shrub or brambles, and 3–7 eggs are laid.

This text is based on the article Common whitethroat from the free encyclopedia Wikipedia and is licensed under the Creative Commons CC-BY-SA 3.0 Unported (short version). A list of the authors is available on Wikipedia.