Stock Photos
The common nightingale, rufous nightingale or simply nightingale (Luscinia megarhynchos), is a small passerine bird best known for its powerful and beautiful song. It was formerly classed as a member of the thrush family Turdidae, but is now more generally considered to be an Old World flycatcher, Muscicapidae. It belongs to a group of more terrestrial species, often called chats.

The common nightingale is slightly larger than the European robin, at 15–16.5 cm (5.9–6.5 in) length. It is plain brown above except for the reddish tail. It is buff to white below. The sexes are similar. The eastern subspecies (L. m. golzi) and the Caucasian subspecies (L. m. africana) have paler upperparts and a stronger face-pattern, including a pale supercilium. 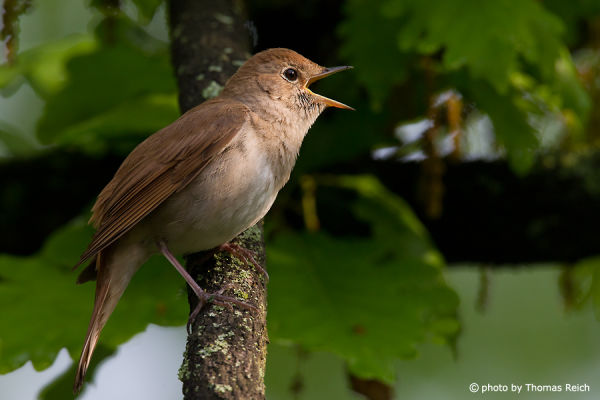 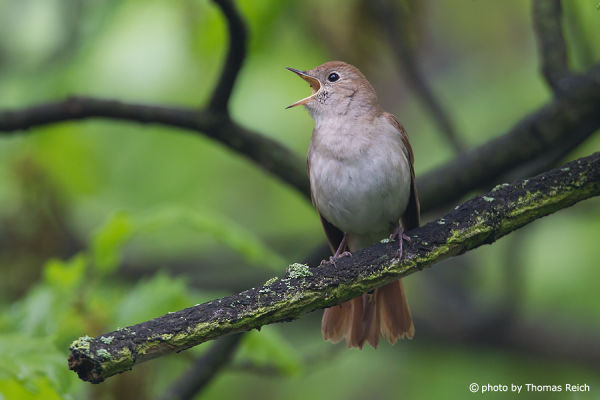 The song of the nightingale has been described as one of the most beautiful sounds in nature, inspiring songs, fairy tales, opera, books, and a great deal of poetry. Common nightingales are so named because they frequently sing at night as well as during the day. The name has been used for more than 1,000 years, being highly recognisable even in its Old English form nihtegale, which means "night songstress". Early writers assumed the female sang when it is in fact the male. The song is loud, with an impressive range of whistles, trills and gurgles. Its song is particularly noticeable at night because few other birds are singing. This is why its name includes "night" in several languages. Only unpaired males sing regularly at night, and nocturnal song probably serves to attract a mate. Singing at dawn, during the hour before sunrise, is assumed to be important in defending the bird's territory. Nightingales sing even more loudly in urban or near-urban environments, in order to overcome the background noise. The most characteristic feature of the song is a loud whistling crescendo, absent from the song of thrush nightingale. It has a frog-like alarm call.

It is a migratory insectivorous species breeding in forest and scrub in Europe and the Palearctic, and wintering in Sub-Saharan Africa. It is not found naturally in the Americas. The distribution is more southerly than the very closely related thrush nightingale Luscinia luscinia. It nests on or near the ground in dense vegetation. Research in Germany found that favoured breeding habitat of nightingales was defined by a number of geographical factors.

In the U.K., the bird is at the northern limit of its range which has contracted in recent years, placing it on the red list for conservation. Despite local efforts to safeguard its favoured coppice and scrub habitat, numbers fell by 53 percent between 1995 and 2008. A survey conducted by the British Trust for Ornithology in 2012 and 2013 recorded some 3,300 territories, with most of these clustered in a few counties in the southeast of England, notably Kent, Essex, Suffolk, and East and West Sussex.

By contrast, the European breeding population is estimated at between 3.2 and 7 million pairs, giving it green conservation status (least concern).

This text is based on the article Common nightingale from the free encyclopedia Wikipedia and is licensed under the Creative Commons CC-BY-SA 3.0 Unported (short version). A list of the authors is available on Wikipedia.