Stock Photos
The common chaffinch or simply the chaffinch (Fringilla coelebs) is a common and widespread small passerine bird in the finch family. The male is brightly coloured with a blue-grey cap and rust-red underparts. The female is much duller in colouring, but both sexes have two contrasting white wing bars and white sides to the tail. The male bird has a strong voice and sings from exposed perches to attract a mate.

The chaffinch breeds in much of Europe, across the Palearctic to Siberia and in northwestern Africa. The female builds a nest with a deep cup in the fork of a tree. The clutch is typically four or five eggs, which hatch in about 13 days. The chicks fledge in around 14 days, but are fed by both adults for several weeks after leaving the nest. Outside the breeding season, chaffinches form flocks in open countryside and forage for seeds on the ground. During the breeding season, they forage on trees for invertebrates, especially caterpillars, and feed these to their young. They are partial migrants; birds breeding in warmer regions are sedentary, while those breeding in the colder northern areas of their range winter further south.

The eggs and nestlings of the chaffinch are taken by a variety of mammalian and avian predators. Its large numbers and huge range mean that chaffinches are classed as of least concern by the International Union for Conservation of Nature.

The common chaffinch is about 14.5 cm (5.7 in) long, with a wingspan of 24.5–28.5 cm (9.6–11.2 in) and a weight of 18–29 g (0.63–1.02 oz). The adult male of the nominate subspecies has a black forehead and a blue-grey crown, nape and upper mantle. The rump is a light olive-green; the lower mantle and scapulars form a brown saddle. The side of head, throat and breast are a dull rust-red merging to a pale creamy-pink on the belly. The central pair of tail feathers are dark grey with a black shaft streak. 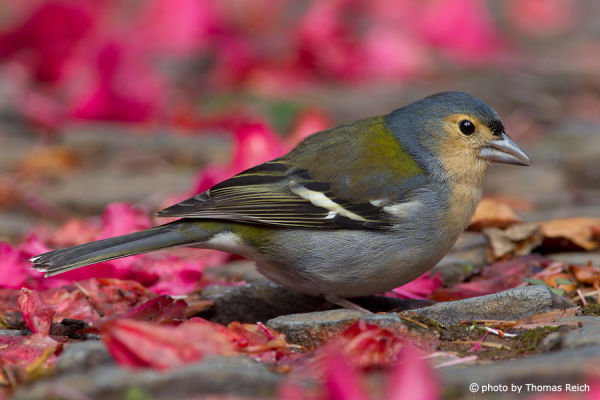 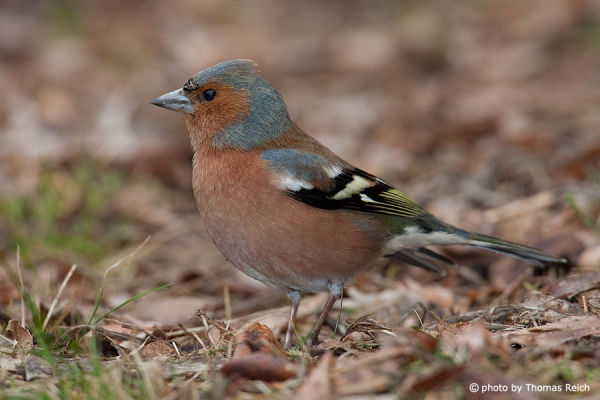 The rest of the tail is black apart from the two outer feathers on each side which have white wedges. Each wing has a contrasting white panel on the coverts and a buff-white bar on the secondaries and inner primaries. The flight feathers are black with white on the basal portions of the vanes. The secondaries and inner primaries have pale yellow fringes on the outer web whereas the outer primaries have a white outer edge.

After the autumn moult, the tips of the new feathers have a buff fringe that adds a brown cast to the coloured plumage. The ends of the feathers wear away over the winter so that by the spring breeding season the underlying brighter colours are displayed. The eyes have dark brown irises and the legs are grey-brown. In winter the bill is a pale grey and slightly darker along the upper ridge or culmen, but in spring the bill becomes bluish-grey with a small black tip.

The male of the subspecies resident in the British Isles (F. c. gengleri) closely resembles the nominate subspecies, but has a slightly darker mantle and underparts. The males of the two North African subspecies F. c. africana and F. c. spodiogenys have a blue-grey crown and nape that extends down to the sides of the head and neck, a black forehead and lore, a broken white eye-ring, a bright olive-green saddle and a pink-buff throat and breast. The males of F. c. canariensis and F. c. palmae in the Canary Islands have deep slate-blue upperparts and lack a contrasting mantle. Male chaffinches in Madeira (F. c. maderensis) and the Azores (F. c. moreletti) are similar in appearance to F. c. canariensis, but have a bright green mantle.

The adult female is much duller in appearance than the male. The head and most of the upperparts are shades of grey-brown. The underparts are paler. The lower back and rump are a dull olive green. The wings and tail are similar to those of the male. The juvenile resembles the female.

The acquisition by the young common chaffinch of its song was the subject of an influential study by British ethologist William Thorpe. Thorpe determined that if the young common chaffinch is not exposed to the adult male's song during a certain critical period after hatching, it will never properly learn the song. He also found that in adult common chaffinches, castration eliminates the song, but injection of testosterone induces such birds to sing even in November, when they are normally silent.

The common chaffinch breeds in wooded areas where the July isotherm is between 12 and 30 °C (54 and 86 °F). The breeding range includes northwestern Africa and most of Europe and extends eastwards across temperate Asia to the Angara River and the southern end of Lake Baikal in Siberia. There are also a number of distinctive subspecies on the Azores, the Canary Islands and the Madeira Islands in the Atlantic Ocean. The common chaffinch was introduced from Great Britain into several of its overseas territories in the second half of the 19th century. In New Zealand, the common chaffinch had colonised both the North and South Islands by 1900 and is now one of the most widespread and common passerine species. In South Africa, a very small breeding colony in the suburbs of Constantia, Hout Bay and Camps Bay in Cape Town is the only remnant of another such introduction.

This bird is not migratory in the milder parts of its range, but vacates the colder regions in winter. It forms loose flocks outside the breeding season, sometimes mixed with bramblings. It occasionally strays to eastern North America, although some sightings may be escapees.

Outside the breeding season, common chaffinches mainly eat seeds and other plant material that they find on the ground. They often forage in open country in large flocks. Common chaffinches seldom take food directly from plants and only very rarely use their feet for handling food. During the breeding season, their diet switches to invertebrates, especially defoliating caterpillars. They forage in trees and also occasionally make short sallies to catch insects in the air. The young are entirely fed with invertebrates which include caterpillars, aphids, earwigs, spiders and grubs (the larvae of beetles).

Common chaffinches first breed when they are 1 year old. They are mainly monogamous and the pair-bond for residential subspecies such as gengleri sometimes persists from one year to the next. The date for breeding is dependent on the spring temperature and is earlier in southwest Europe and later in the northeast. In Great Britain, most clutches are laid between late April and the middle of June. A male attracts a female to his territory through song.

Nests are built entirely by the female and are usually located in the fork of a bush or a tree several metres above the ground. The nest has a deep cup and is lined with a layer of thin roots and feathers. The outside is covered with a layer of lichen and spider silk over an inner layer of moss and grass. The eggs are laid in early morning at daily intervals until the clutch is complete.The clutch is typically 4–5 eggs, which are smooth and slightly glossy, but very variable in colour. They range from pale-blueish green to light red with purple-brown blotches, spots or steaks. The average size of an egg is 19 mm × 15 mm (0.75 in × 0.59 in) with a weight of 2.2 g (0.078 oz). The eggs are incubated for 10–16 days by the female.

The chicks are altricial, hatching nearly naked with closed eyes, and are fed by both parents but mainly by the female, who broods them for around six days. They are mainly fed caterpillars. The nestlings fledge 11–18 days after hatching and disperse. The young birds are then assisted with feeding by both parents for a further three weeks. The parents only very rarely start a second brood, but when they do so it is always in a new nest. Juveniles undergo a partial moult at around five weeks of age in which they replace their head, body and many of their covert feathers, but not their primary and secondary flight feathers. After breeding adult birds undergo a complete annual moult which lasts around ten weeks.

In a study carried out in Britain using ring-recovery data, the survival rate for juveniles in their first year was 53 per cent, and the adult annual survival rate was 59 per cent. From these figures the typical lifespan is only 3 years, but the maximum age recorded is 15 years and 6 months for a bird in Switzerland.

This text is based on the article Common chaffinch from the free encyclopedia Wikipedia and is licensed under the Creative Commons CC-BY-SA 3.0 Unported (short version). A list of the authors is available on Wikipedia.