Stock Photos
The Eurasian wren (Troglodytes troglodytes) is a very small bird, and the only member of the wren family Troglodytidae found in Eurasia and Africa (Maghreb). In Anglophone Europe, it is commonly known simply as the wren. It was once lumped with Troglodytes hiemalis of eastern North America and Troglodytes pacificus of western North America as the winter wren. It is also highly polygynous, an unusual mating system for passerines.

The scientific name is taken from the Greek word "troglodytes" (from trogle a hole, and dyein to creep), meaning "cave-dweller", and refers to its habit of disappearing into cavities or crevices whilst hunting arthropods or to roost. The taxonomy of the genus Troglodytes is currently unresolved, as recent molecular studies have suggested that Cistothorus spp. and Thryorchilus spp. are within the clade currently defined by Troglodytes.

he 9- to 10.5-cm-long and 6–10 g wren is rufous brown above, greyer beneath, barred with darker brown and grey, even on wings and tail. The bill is dark brown, the legs pale brown. Young birds are less distinctly barred. 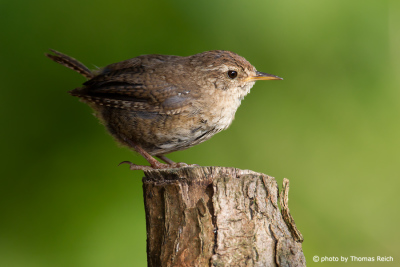 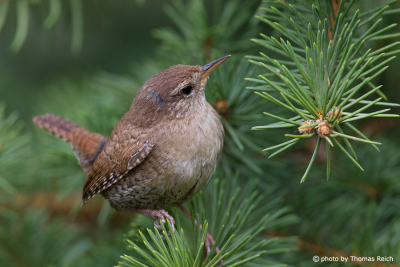 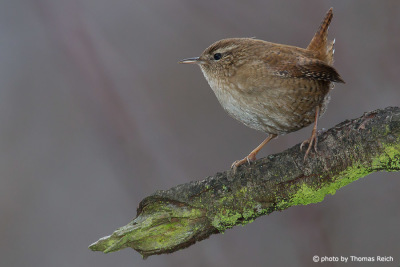 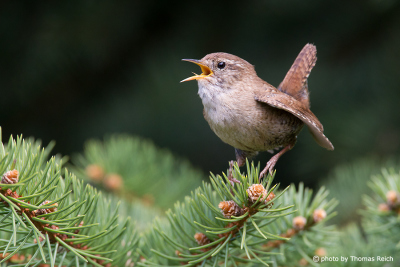 The plumage is subject to considerable variation, and where populations have been isolated, the variation has become fixed in one minor form or another. There are around 27 subspecies of this taxonomically complex bird. The disputed subspecies orii, the Daito winter wren, became extinct around 1940 – if it is indeed a valid taxon and not merely based on an anomaly.

Thus in Scotland, in addition to the typical bird T. t. indigenus, there are three distinct insular subspecies: one, T. t. hirtensis, is confined to the island of St. Kilda; another, T. t. zetlandicus, to the Shetland Islands; and the third, T. t. fridariensis, to Fair Isle. The St. Kilda wren is greyer above, whiter beneath, with more abundant bars on the back; the Shetland wren and Fair Isle wren are darker.

When this bird is annoyed or excited, its call runs into an emphatic churr, not unlike clockwork running down. Its song is a gushing burst of sweet music, loud and emphatic. It has an enormous voice for its size, ten times louder, weight for weight, than a cockerel. Its song may sometimes be confused for the dunnock, which has warble that is shorter and weaker. The wren's song also incorporates repeated trill sounds while the dunnock's does not. Individuals vary in quality as well as volume of their song. The song begins with a few preliminary notes, then runs into a trill, slightly ascending, and ends in full clear notes or another trill. At all and any season, the song may be heard, though most noticeable during spring. Despite its generally mouse-like behaviour, the male may sing from an exposed perch as its whole body quivers from the effort. Male has remarkable long and complex vocalizations, with a series of tinkling trills one after the other for seconds on end. 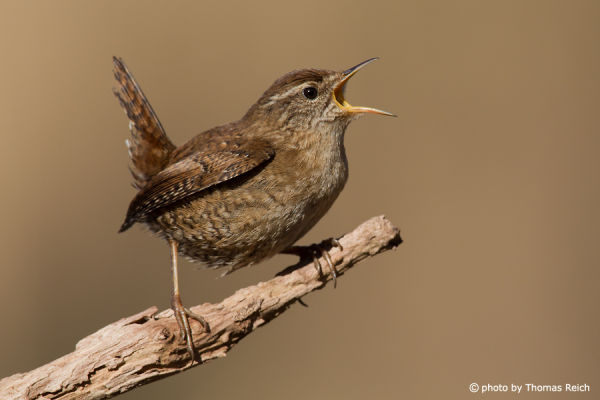 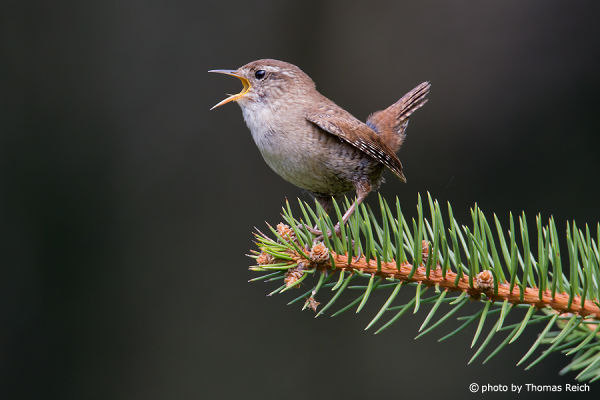 The Eurasian wren occurs in Europe and across the Palearctic – including a belt of Asia from northern Iran and Afghanistan across to Japan. It is migratory in only the northern parts of its range.

This small, stump-tailed wren is almost as familiar in Europe as the robin. It is mouse-like, easily lost sight of when it is hunting for food, but is found everywhere from the tops of the highest moors to the sea coast.

In most of northern Europe and Asia, it nests mostly in coniferous forests, where it is often identified by its long and exuberant song. Although it is an insectivore, it can remain in moderately cold and even snowy climates by foraging for insects on substrates such as bark and fallen logs.

Its movements as it creeps or climbs are incessant rather than rapid; its short flights swift and direct but not sustained, its tiny round wings whirring as it flies from bush to bush.

It is a bird of the uplands even in winter, vanishing into the heather when snow lies thick above, a troglodyte indeed. It frequents gardens and farms, but it is quite as abundant in thick woods and in reed-beds.

At night, usually in winter, it often roosts, true to its scientific name, in dark retreats, snug holes and even old nests. In hard weather, it may do so in parties, consisting of either the family or of many individuals gathered together for warmth.

For the most part insects and spiders are its food, but in winter large pupae are taken and some seeds.

The male wren builds several nests, up to 6 or 7. These are called "cock nests" but are never lined until the female chooses one to use.

The normal round nest of grass, moss, lichens or leaves is tucked into a hole in a wall, tree trunk, crack in a rock or corner of a building, but it is often built in bushes, overhanging boughs or the litter which accumulates in branches washed by floods.

Five to eight white or slightly speckled eggs are laid in April, and second broods are reared. The eggs of the St. Kilda wren are marginally larger and often more boldly spotted; six is the usual number.

Wrens are highly polygamous, that is to say a male can have, at any one time, more than one female with an active nest on his territory. An active nest is one in which there are eggs or nestlings. A male has been recorded with four females breeding on his territory. Bigamy and trigamy are the most common forms of polygamy.

This text is based on the article Eurasian wren from the free encyclopedia Wikipedia and is licensed under the Creative Commons CC-BY-SA 3.0 Unported (short version). A list of the authors is available on Wikipedia.