Stock Photos
The brambling (Fringilla montifringilla) is a small passerine bird in the finch family Fringillidae. It has also been called the cock o´ the north and the mountain finch. It is widespread and migratory, often seen in very large flocks.

The brambling is similar in size and shape to a common chaffinch. Breeding-plumaged male bramblings are very distinctive, with a black head, dark upperparts, orange breast and white belly. Females and younger birds are less distinct, and more similar in appearance to some chaffinches. In all plumages, however, bramblings differs from chaffinches in a number of features: 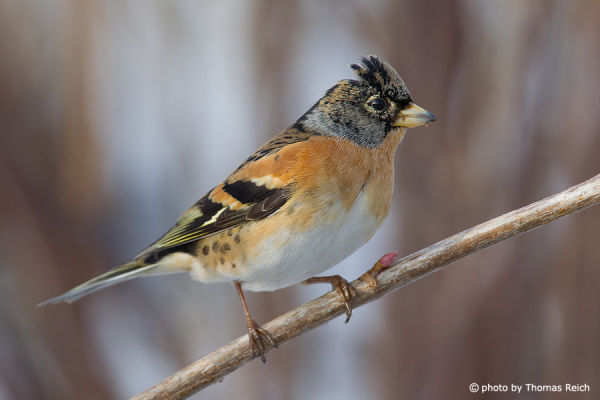 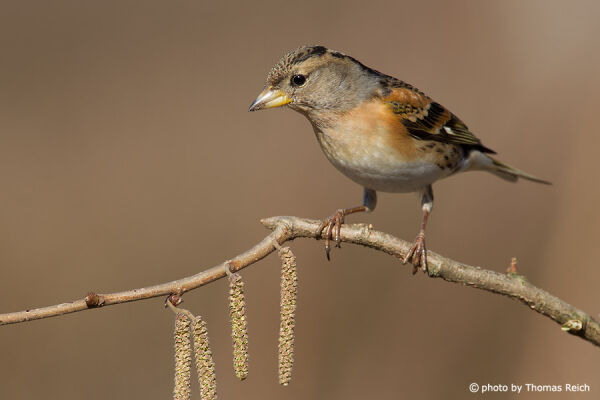 This bird is widespread, in the breeding season, throughout the forests of northern Europe and east across the Palearctic. It is migratory, wintering in southern Europe, North Africa, northern India, northern Pakistan, China, and Japan. It regularly strays into Alaska during migration and may continue as far south as the western United States. The global population of bramblings is about 100 to 200 million, with a decreasing trend.

This species is almost entirely migratory. In Europe, it forms large flocks in the winter, sometimes with thousands or even millions of birds in a single flock. Such large gatherings occur especially if beech mast is abundant. Bramblings do not require beech mast in the winter, but winter flocks of bramblings will move until they find it. This may be an adaptation to avoid competition with the common chaffinch.

Open coniferous or birch woodland is favoured for breeding. It builds its nest in a tree fork, and decorates the exterior with moss or lichen to make it less conspicuous. It lays 4–9 eggs.

This text is based on the article Brambling from the free encyclopedia Wikipedia and is licensed under the Creative Commons CC-BY-SA 3.0 Unported (short version). A list of the authors is available on Wikipedia.