This bird breeds across Europe and temperate Asia (Palearctic). It is mainly resident in Europe, but many Asian birds migrate further south in the winter. It is a rare vagrant to the western islands of Alaska.

Deciduous or mixed woodland, including parkland, with large trees – especially hornbeam – is favoured for breeding. The hawfinch builds its nest in a bush or tree, and lays 2–7 eggs. The food is mainly seeds and fruit kernels, especially those of cherries, which it cracks with its powerful bill. This large finch species is usually seen in a pair or small group.

The 16.5–18 cm long hawfinch is a bulky bull-headed bird, which appears very short-tailed in flight. Its head is orange-brown with a black eyestripe and bib, and a massive bill, which is black in summer but paler in winter. The upper parts are dark brown and the underparts orange.

The hawfinch has an overall length of 18 cm (7.1 in), with a wingspan that ranges from 29 to 33 cm (11 to 13 in). It weighs 46–70 g (1.6–2.5 oz) with the male being on average slightly heavier than the female. It is a robust bird with a thick neck, large round head and a wide, strong conical beak with a metallic appearance. It has short pinkish legs with a light hue and it has a short tail. It has brown eyes. The plumage of the female is slightly paler than that of the male. The overall colour is light brown, its head having an orange hue to it. Its eyes have a black circle around them, extending to its beak and surrounding it at its edge. Its throat is also black. The sides of its neck, as well as the back of its neck, are gray. The upper side of its wings are a deep black colour. The wings also have three stripes from approximately the middle till their sides: a white, a brown and a blue stripe. Adults moults between July and September. 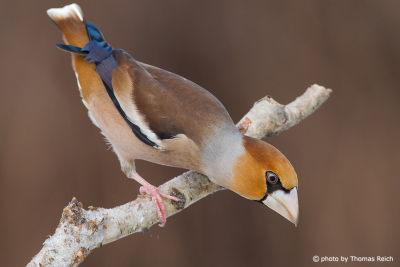 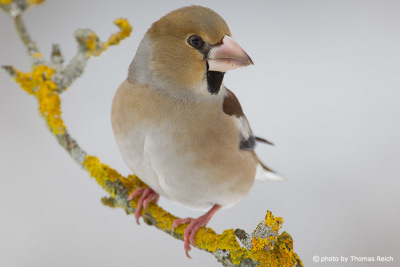 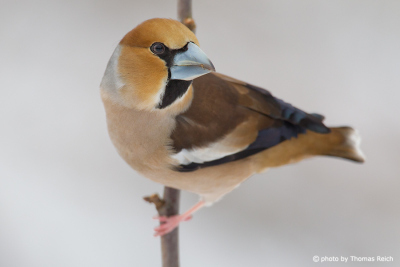 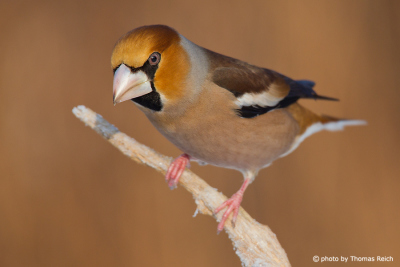 The hawfinch is a shy species, and therefore difficult to observe and study. It spends most of the day on top of high branches, above all during breeding season. During the course of the hawfinch's life it can only be seen on the ground while looking for seeds or drinking water, always near trees. While drinking and eating it is fairly aggressive and dominant, towards both its same species or different ones, even bigger birds. It guards a quite small territory when its chicks are born; however, when not bearing any offspring it is known to guard entire woods. This is interpreted as an evolutionary advantage, given colony rearing is seen as safer against nest predators.

Its flight is quick and its trajectory is straight over short distances. During long flights periodical undulations can be observed in their flight pattern. While on the ground scavenging it hops, and they are quick to fly away at the slightest noise. They are observed to catch insects mid-flight. They fly up to a height of 200 m and they are seen to fly in groups, as well as alone.

The hawfinch is distributed in the whole of Europe, Eastern Asia (Palearctic including North Japan), and North Africa (Morocco, Tunisia and Algeria). It has also been sighted in Alaska, but this is reported as an accidental presence. It is not found in Iceland, parts of the British Isles, Scandinavia or certain Mediterranean islands. It is however found in southern Europe, such as in Spain and Bulgaria, as well as in central Europe, including parts of England and southern Sweden. In Asia it can be found in the Caucasus, northern Iran, Afghanistan, Turkistan, Siberia, Manchuria and North Korea.

The hawfinch typically inhabits deciduous forests during the spring to have offspring, often in trees that bear fruit, such as oak trees. They also incur into human areas, such as parks and gardens. They can also be found in pine woods, as long as there is a source of water in the vicinity. During autumn and winter they seek food-providing forests, especially those with cherry and plum trees. As for height, the hawfinch is present in any altitude up to that which is limited by the size of the trees.

The hawfinch feeds primarily on hard seeds from trees, as well as fruit seeds, which it obtains with the help of its strong beak with accompanying jaw muscles. Its jaw muscles exert a force equivalent to a load of approximately 30–48 kg. Thus it can break through the seeds of cherries and plums. Other common sources of food include pine seeds, berries, sprouts and the occasional caterpillar and beetle. They can also break through olive seeds. The bird is known to eat in groups, especially during the winter.

Hawfinches first breed when they are 1 year old. They are monogamous, with a pair-bond that sometimes persists from one year to the next. Pair-formation takes place before the breakup of the wintering flocks. The date for breeding is dependent on the spring temperature and is earlier in southwest Europe and later in the northeast. In Britain, most clutches are laid between late April and late June.

Hawfinches engage in an elaborate series of courtship routines. The two birds stand apart facing one another and reach out to touch their bills. The male displays to the female by standing erect, puffing out the feathers on his head, neck and chest and allowing his wings to droop forward. He then makes a deep bow. The male will also lower a wing and move it in a semi-circular arc, revealing his wing bars and modified wing feathers.

The breeding pairs are usually solitary, but they occasionally breed in loose groups. The nest is normally located high in a tree on a horizontal branch with easy access from the air.The male chooses the site of the nest and builds a layer of dry twigs. After a few days, the female takes over. The nest is untidy and is formed of a bulky twig base and a shallow cup lined with roots, grasses and lichens. The eggs are laid in early morning at daily intervals. The clutch is normally 4–5 eggs. There is considerable variable in the colour and shape of the eggs. They have purple brown and pale grey squiggles on a background that can be buff, grey-green or pale blueish. The average size is 24.1 mm × 17.5 mm (0.95 in × 0.69 in) with a calculated weight of 3.89 g (0.137 oz). The eggs are incubated for 11–13 days by the female.

The nestlings are fed by both parents, who regurgitate seeds but also bring mouthfuls of caterpillars. Initially, the male normally passes the food to the female who feeds the chicks, but as they grow bigger both adults feed them directly. The female broods the chicks while they are in the nest. They fledge after 12–14 days and the young birds become independent of their parents around 30 days later. The parents generally only raise a single brood each year.

The hawfinch is highly unusual among cardueline finches in that the male bird chooses the nest site and starts the construction. In other species the female performs these roles. The hawfinch is also unusual in that the nest is kept clean by the parents removing the faecal sacs of the nestlings right up to the time when the chicks fledge. This behaviour is shared by the Eurasian bullfinch, but most finches cease to remove the faecal material after the first few days.

The annual survival rate is not known. The maximum age obtained from ring-recovery data is 12 years and 7 months for a bird in Germany.

This text is based on the article Hawfinch from the free encyclopedia Wikipedia and is licensed under the Creative Commons CC-BY-SA 3.0 Unported (short version). A list of the authors is available on Wikipedia.