Stock Photos
The common crane (Grus grus), also known as the Eurasian crane, is a bird of the family Gruidae, the cranes. A medium-sized species, it is the only crane commonly found in Europe besides the demoiselle crane (Anthropoides virgo). Along with the sandhill (Grus canadensis) and demoiselle cranes and the brolga (Grus rubicunda), it is one of only four crane species not currently classified as threatened with extinction or conservation dependent on the species level. Despite the species' large numbers, local extinctions and extirpations have taken place in part of its range, and an ongoing reintroduction project is underway in the United Kingdom.

Males are slightly heavier and larger than females, with weight showing the largest sexual size dimorphism, followed by wing, central toe, and head length in adults and juveniles. 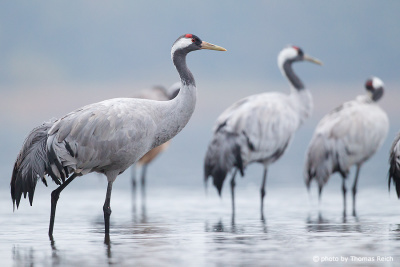 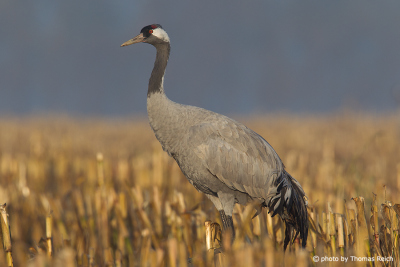 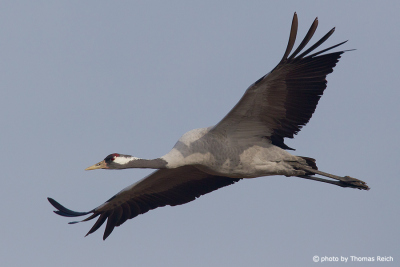 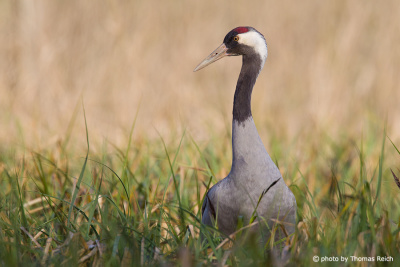 This species is slate-grey overall. The forehead and lores are blackish with a bare red crown and a white streak extending from behind the eyes to the upper back. The overall colour is darkest on the back and rump and palest on the breast and wings. The primaries, the tips of secondaries, the alula, the tip of the tail, and the edges of upper tail coverts are all black and the greater coverts droop into explosive plumes. This combination of colouration ultimately distinguishes it from similar species in Asia, like the hooded (G. monacha) and black-necked cranes (G. nigricollis). The juvenile has yellowish-brown tips to its body feathers and lacks the drooping wing feathers and the bright neck pattern of the adult, and has a fully feathered crown. Every two years, before migration, the adult common crane undergoes a complete moult, remaining flightless for six weeks, until the new feathers grow.

The common crane is a fairly social bird while not breeding. Flocks of up to 400 birds may be seen flying together during migration. Staging sites, where migrating birds gather to rest and feed in the middle of their migration, may witness thousands of cranes gathering at once. However, the flocks of the species are not stable social units but rather groups that ensure greater safety in numbers and collectively draw each other's attention to ideal foraging and roosting sites.[10] Possibly due to a longer molt, younger and non-breeding cranes are usually the earliest fall migrants and may band together at that time of year. During these migratory flights, common cranes have been known to fly at altitudes of up to 33,000 ft (10,000 m), one of the highest of any species of bird, second only to the Ruppell's Griffin Vulture.

Cranes use a kleptoparasitic strategy to recover from temporary reductions in feeding rate, particularly when the rate is below the threshold of intake necessary for survival. Accumulated intake of common cranes during daytime at a site of stopover and wintering shows a typical anti-sigmoid shape, with greatest increases of intake after dawn and before dusk.

It has a loud trumpeting call, given in flight and display. The call is piercing and can be heard from a considerable distance. It has a dancing display, leaping with wings uplifted, described in detail below. 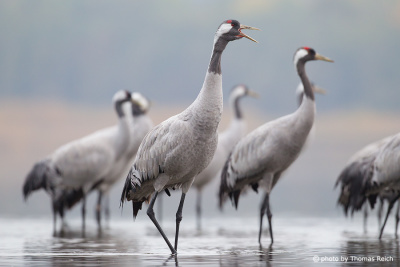 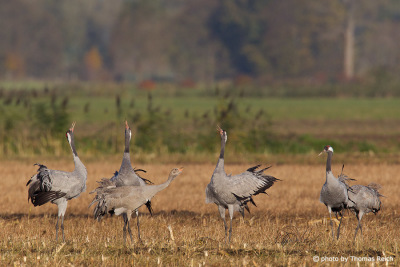 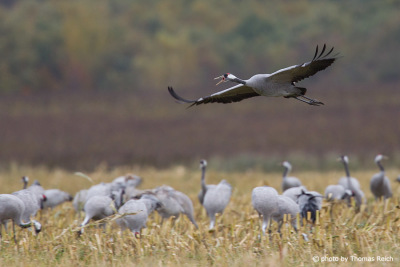 This species is found in the northern parts of Europe and across the Palearctic to Siberia. Formerly the species was spread as far west as Ireland, but about 200 years ago, it became extinct there. However, it has since started to return to Ireland naturally and there are now plans to help it return to Ireland on a greater scale. The common crane is an uncommon breeder in southern Europe, smaller numbers breeding in Greece, former-Yugoslavia, Romania, Denmark and Germany. Larger breeding populations can be found in Scandinavia, especially Finland and Sweden. The heart of the breeding population for the species is in Russia, however, where possibly up to 100,000 cranes of this species can be found seasonally. It is distributed as a breeder from Ukraine to the Chukchi Peninsula in Russia. The breeding population extends as far south as Manchuria but almost the entire Asian breeding population is restricted to Russia. Approximately 48-50 breeding pairs exist in the UK, with population centres in Somerset and Norfolk.

The species is a long distance migrant predominantly wintering in northern Africa. Autumn migration is from August to October in the breeding areas, but from late October to early December at the wintering sites. Spring migration starts in February at wintering sites up to early March, but from March through May at the breeding areas. Migration phenology of common cranes is changing due to climate change. Important staging areas occur anywhere from Sweden, The Netherlands and Germany to China (with a large one around the Caspian Sea) and many thousand cranes can be seen in one day in the Autumn. Some birds winter in southern Europe, including Portugal, Spain and France. Most eastern common cranes winter in the river valleys of Sudan, Ethiopia, Tunisia and Eritrea with smaller numbers in Turkey, northern Israel, Iraq and parts of Iran. The third major wintering region is in the northern half of Indian subcontinent, including Pakistan. Minimal wintering also occurs in Burma, Vietnam and Thailand. Lastly, they winter in eastern China, where they are often the most common crane (outnumbering black-necked cranes ten-to-one). Migrating flocks fly in a "V" formation.

It is a rare visitor to Japan and Korea, mostly blown over from the Chinese wintering population, and is a rare vagrant to western North America, where birds are occasionally seen with flocks of migrating sandhill cranes.

In Europe, the common crane predominantly breeds in boreal and taiga forest and mixed forests, from an elevation of sea-level to 2,200 m (7,200 ft). In northern climes, it breeds in treeless moors, on bogs, or on dwarf heather habitats, usually where small lakes or pools are also found. In Sweden, breeders are usually found in small, swampy openings amongst pine forests, while in Germany, marshy wetlands are used. Breeding habitat used in Russia are similar, though they can be found nesting in less likely habitat such as steppe and even semi-desert, so long as water is near. Primarily, the largest number of common cranes are found breeding in wooded swamps, bogs and wetlands and seem to require quiet, peaceful environs with minimal human interference. They occur at low density as breeders even where common, typically ranging from 1 to 5 pairs per 100 km2 (39 sq mi).

In winter, this species moves to flooded areas, shallow sheltered bays, and swampy meadows. During the flightless moulting period there is a need for shallow waters or high reed cover for concealment. Later, after the migration period, the birds winter regularly in open country, often on cultivated lands and sometimes also in savanna-like areas, for example on the Iberian Peninsula. 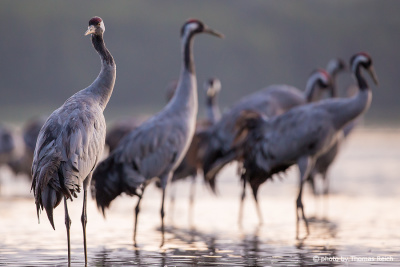 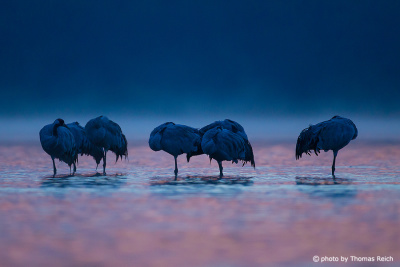 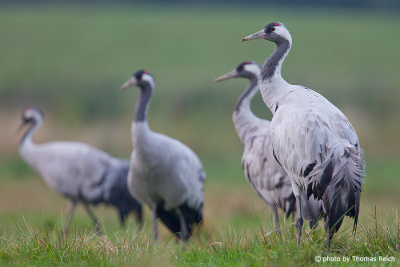 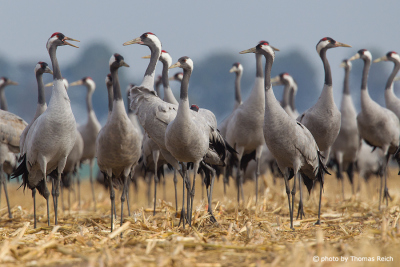 The common crane is omnivorous, as are all cranes. It largely eats plant matter, including roots, rhizomes, tubers, stems, leaves, fruits and seeds. They also commonly eat, when available, pond-weeds, heath berries, peas, potatoes, olives, acorns, cedarnuts and pods of peanuts. Notably amongst the berries consumed, the cranberry, is possibly named after the species.[citation needed]

Animal foods become more important during the summer breeding season and may be the primary food source at that time of year, especially while regurgitating to young. Their animal foods are insects, especially dragonflies, and also snails, earthworms, crabs, spiders, millipedes, woodlice, amphibians, rodents, and small birds.

Common cranes may either forage on land or in shallow water, probing around with their bills for any edible organism. Although crops may locally be damaged by the species, they mostly consume waste grain in winter from previously harvested fields and so actually benefit farmers by cleaning fields for use in the following year. As with other cranes, all foraging (as well as drinking and roosting) is done in small groups, which may variously consist of pairs, family groups or winter flocks. 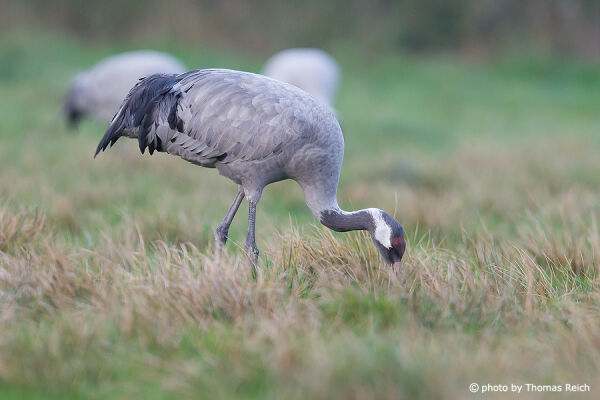 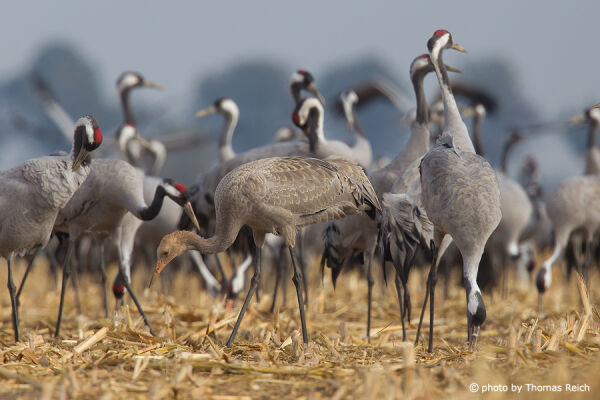 This species usually lays eggs in May, though seldom will do so earlier or later. Like most cranes, this species displays indefinite monogamous pair bonds. If one mate dies, a crane may attempt to court a new mate the following year. Although a pair may be together for several years, the courtship rituals of the species are enacted by every pair each spring. The dancing of common cranes has complex, social meanings and may occur at almost any time of year. Dancing may include bobs, bows, pirouettes, and stops, as in various crane species. Aggressive displays may include ruffled wing feathers, throwing vegetation in the air and pointing the bare red patch on their heads at each other. Courtship displays begin with a male following the female in a stately, march-like walk. The unison call, consists of the female holding her head up and gradually lowering down as she calls out. The female calls out a high note and then the male follows with a longer scream in a similar posture. Copulation consists of a similar, dramatic display.

The nesting territory of common cranes is variable and is based on the local habitat. It can range in size from variously 2 to 500 ha (4.9 to 1,235.5 acres). In common with sandhill cranes (and no other crane species), common cranes "paint" their bodies with mud or decaying vegetation, apparently in order to blend into their nesting environment. The nest is either in or very near shallow water, often with dense shore vegetation nearby, and may be used over several years. The size and placement of the nest varies considerably over the range, with Arctic birds building relatively small nests. In Sweden, an average nest is around 90 cm (35 in) across.

The clutch of the common crane usually contains two eggs, with seldom one laid and, even more rarely, 3 or 4. If a clutch is lost early in incubation, the cranes may be able to lay another one within a couple of weeks. The incubation period is around 30 days and is done primarily by the female but occasionally by both sexes. If humans approach the nest both parents may engage in a distraction display but known ground predators (including domestic dogs (Canis lupus familiaris)) are physically attacked almost immediately. 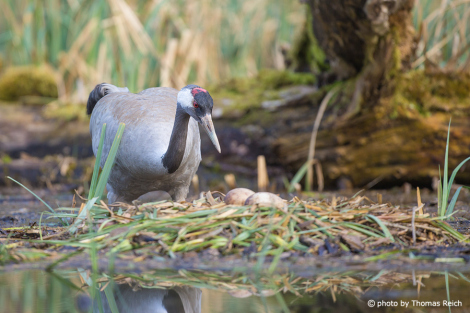 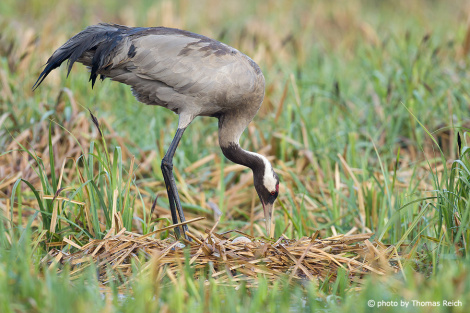 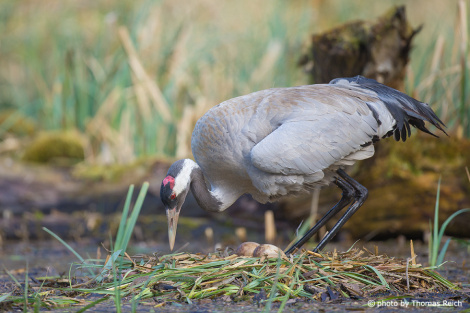 New hatchlings are generally quite helpless but are able to crawl away from danger within a few hours, can swim soon after hatching and can run with their parents at 24 hours old. Chicks respond to danger by freezing, using their camouflaged brownish down to defend them beyond their fierce parents. Young chicks use their wings to stabilise them while running, while by 9 weeks of age they can fly short distances. The adult birds go through their postbreeding moult while caring for their young, rendering them flightless for about 5 to 6 weeks around the time the young also can't fly yet. According to figures of cranes wintering in Spain, around 48% birds have surviving young by the time they winter and around 18% are leading two young by winter. By the next breeding season, the previous years young often flock together. The age of sexual maturity in wild birds has been estimated at variously from 3 to 6 years of age. It is thought that it is common for this species to live up to 30 or 40 years of age. 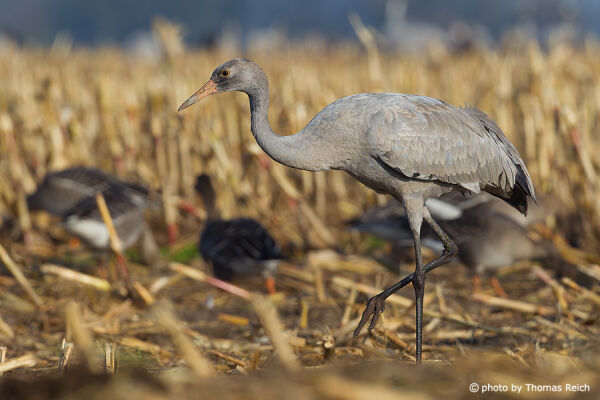 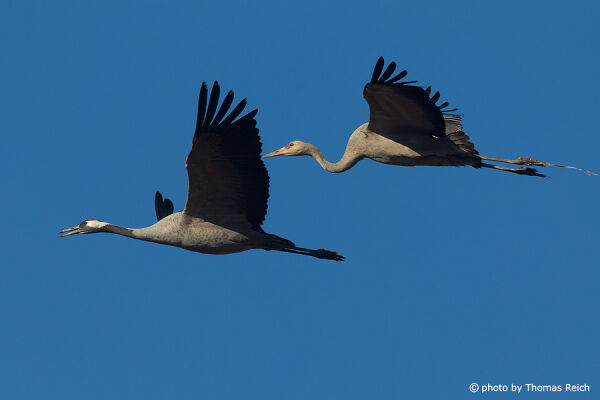 This text is based on the article Common crane from the free encyclopedia Wikipedia and is licensed under the Creative Commons CC-BY-SA 3.0 Unported (short version). A list of the authors is available on Wikipedia.