Stock Photos
The Eurasian whimbrel (Numenius phaeopus) is a wader in the large family Scolopacidae. It is one of the most widespread of the curlews, breeding across much of subarctic Asia and Europe as far south as Scotland. This species and the Hudsonian whimbrel have recently been split, although some taxonomic authorities still consider them to be conspecific.

The Eurasian whimbrel is a migratory bird wintering on coasts in Africa, and South Asia into Australasia. It is also a coastal bird during migration. It is fairly gregarious outside the breeding season.

This is a fairly large wader though mid-sized as a member of the curlew genus. The English name is imitative of the bird's call. The genus name Numenius is from Ancient Greek noumenios, a bird mentioned by Hesychius. It is associated with the curlews because it appears to be derived from neos, "new" and mene "moon", referring to the crescent-shaped bill. The species name phaeopus is the Medieval Latin name for the bird, from Ancient Greek phaios, "dusky" and pous, "foot". 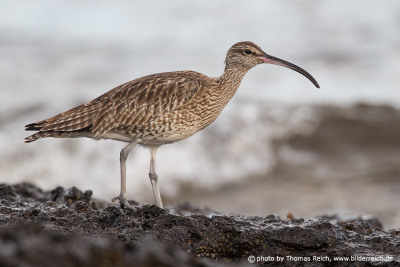 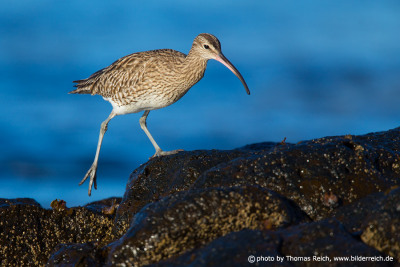 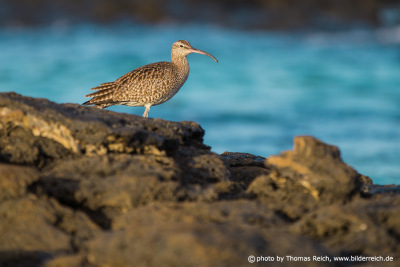 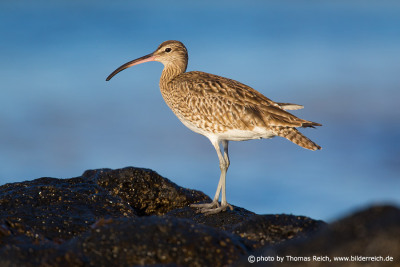 The only similar common species over most of this bird's range are larger curlews. The whimbrel is smaller, has a shorter, decurved bill and has a central crown stripe and strong supercilia.

The usual call is a rippling whistle, prolonged into a trill for the song.

This species feeds by probing soft mud for small invertebrates and by picking small crabs and similar prey off the surface. Before migration, berries become an important part of their diet. It has also been observed taking insects, specifically blue tiger butterflies.

The nest is a bare scrape on tundra or Arctic moorland. Three to five eggs are laid. Adults are very defensive of nesting area and will even attack humans who come too close.

Near the end of the 19th century, hunting on their migration routes took a heavy toll on this bird's numbers; the population has since recovered.

In the Ireland and Britain, it breeds in Scotland, particularly around Shetland, Orkney, the Outer Hebrides as well as the mainland at Sutherland and Caithness.

This text is based on the article Eurasian whimbrel from the free encyclopedia Wikipedia and is licensed under the Creative Commons CC-BY-SA 3.0 Unported (short version). A list of the authors is available on Wikipedia.