Stock Photos
The common redstart (Phoenicurus phoenicurus), or often simply redstart, is a small passerine bird in the redstart genus Phoenicurus. Like its relatives, it was formerly classed as a member of the thrush family, (Turdidae), but is now known to be an Old World flycatcher (family Muscicapidae).

The common redstart shows some affinity to the European robin in many of its habits and actions. It has the same general carriage, and chat-like behaviour, and is the same length at 13–14.5 cm long but slightly slimmer and not quite as heavy, weighing 11–23 g. The orange-red tail, from which it and other redstarts get their names ("start" is an old word for "tail"), is frequently quivered. Among common European birds, only the black redstart (Phoenicurus ochrurus) has a similarly coloured tail. 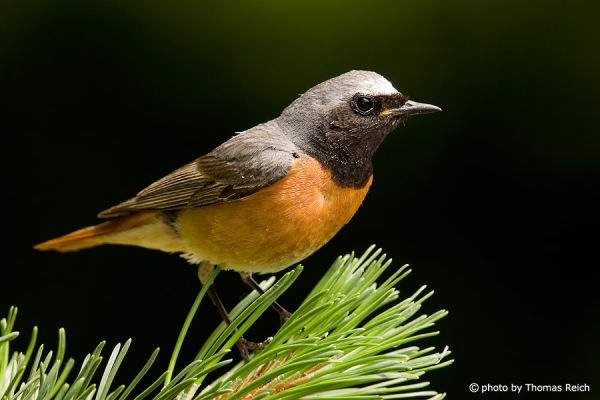 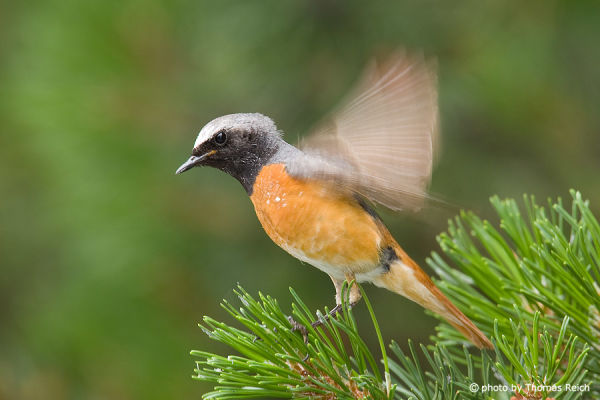 The male in summer has a slate-grey head and upperparts, except the rump and tail, which, like the flanks, underwing coverts and axillaries are orange-chestnut. The forehead is white; the sides of the face and throat are black. The wings and the two central tail feathers are brown, the other tail feathers bright orange-red. The orange on the flanks shades to almost white on the belly. The bill and legs are black. In autumn, pale feather fringes on the body feathering obscures the colours of the male, giving it a washed-out appearance. The female is browner, with paler underparts; it lacks the black and slate, and the throat is whitish.

The call is chat-like and the alarm a plaintive single note, wheet, like that of many other chats.

Common redstarts prefer open mature birch and oak woodland with a high horizontal visibility and low amounts of shrub and understorey especially where the trees are old enough to have holes suitable for its nest. They prefer to nest on the edge of woodland clearings. In Britain it occurs primarily in upland areas less affected by agricultural intensification, but further east in Europe also commonly in lowland areas, including parks and old gardens in urban areas. They nest in natural tree holes, so dead trees or those with dead limbs are beneficial to the species; nestboxes are sometimes used. A high cover of moss and lichen is also preferred. They also use mature open conifer woodland, particularly in the north of the breeding range. Management to thin out the trees is thus favoured.

In England, where it has declined by 55% in the past 25 years, the Forestry Commission offers grants under a scheme called England's Woodland Improvement Grant (EWIG); as does Natural Englands Environmental Stewardship Scheme.[citation needed] It is a very rare breeding bird in Ireland, with between one and five pairs breeding in most years, nearly all of them in County Wicklow.

It often feeds like a flycatcher, making aerial sallies after passing insects, and most of its food consists of winged insects. 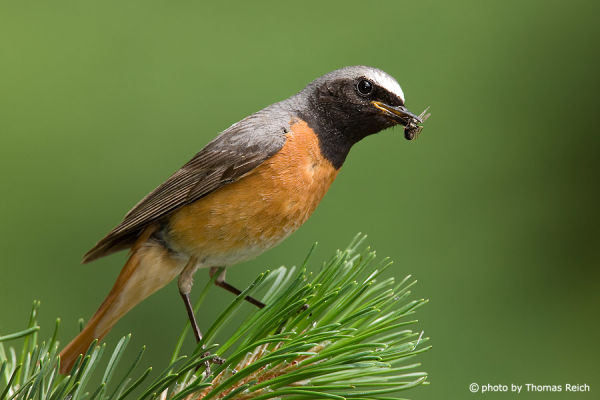 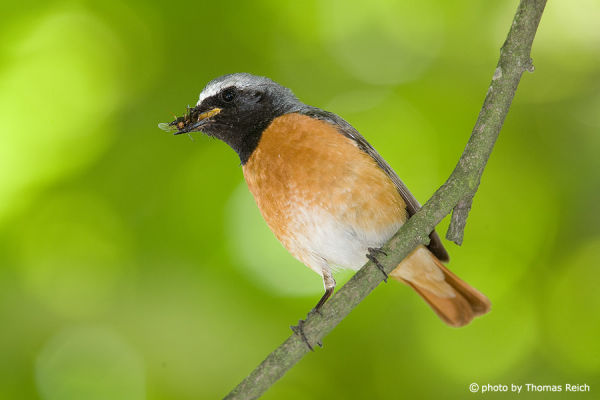 It is a summer visitor throughout most of Europe and western Asia (east to Lake Baikal), and also in northwest Africa in Morocco. It winters in central Africa and Arabia, south of the Sahara Desert but north of the Equator, from Senegal east to Yemen. It is widespread as a breeding bird in Great Britain, particularly in upland broadleaf woodlands and hedgerow trees, but in Ireland it is very local, and may not breed every year.

The males first arrive in early to mid April, often a few days in advance of the females. Five or six light blue eggs are laid during May, with a second brood in mid summer in the south of the breeding range. It departs for Africa between mid-August and early October.

Common redstarts are sometimes parasitized by common cuckoos. Surprisingly, redstart chicks did not suffer from sharing the nest with a Cuckoo chick. The presence of a cuckoo might even be beneficial for the nestlings. The large size of the cuckoo chick affects the thermoregulation in the nest. In some sense, the Cuckoo chick is ‘brooding’ the Redstart nestlings. Moreover, food provision might be better for redstart chicks in a mixed brood.[ 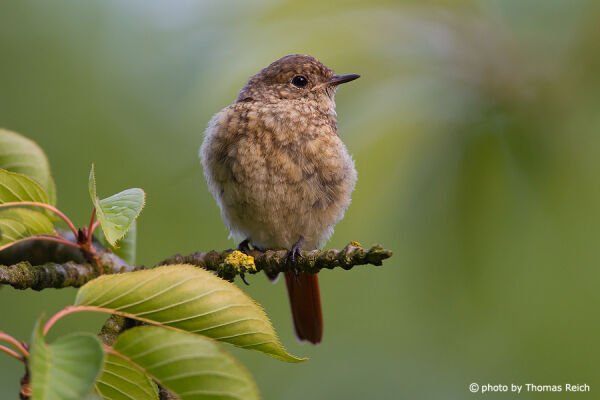 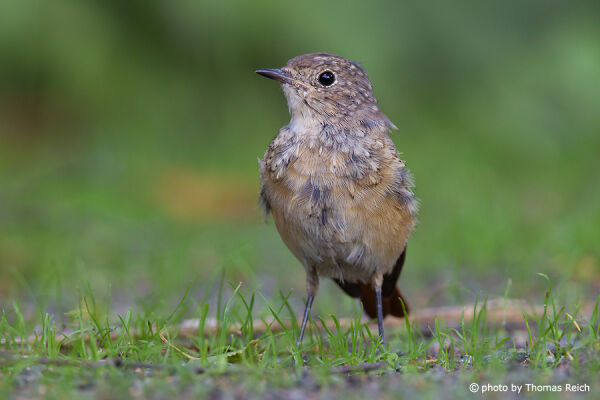 This text is based on the article Common redstart from the free encyclopedia Wikipedia and is licensed under the Creative Commons CC-BY-SA 3.0 Unported (short version). A list of the authors is available on Wikipedia.