Stock Photos
Flamingos or flamingoes /fləˈmɪŋɡoʊz/ are a type of wading bird in the family Phoenicopteridae, the only bird family in the order Phoenicopteriformes.

Flamingos usually stand on one leg while the other is tucked beneath their bodies. The reason for this behaviour is not fully understood. One theory is that standing on one leg allows the birds to conserve more body heat, given that they spend a significant amount of time wading in cold water. However, the behaviour also takes place in warm water and is also observed in birds that do not typically stand in water. An alternative theory is that standing on one leg reduces the energy expenditure for producing muscular effort to stand and balance on one leg. A study on cadavers showed that the one-legged pose could be held without any muscle activity, while living flamingos demonstrate substantially less body sway in a one-legged posture.As well as standing in the water, flamingos may stamp their webbed feet in the mud to stir up food from the bottom. 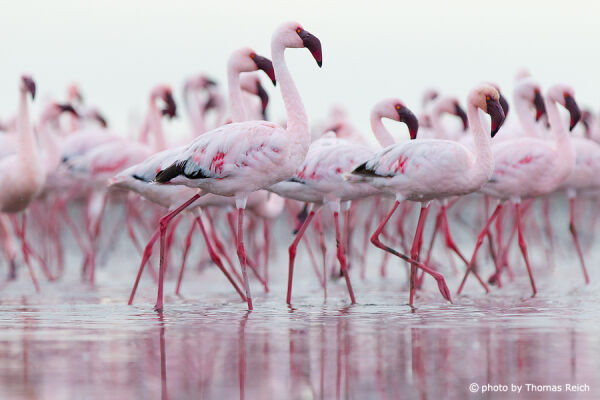 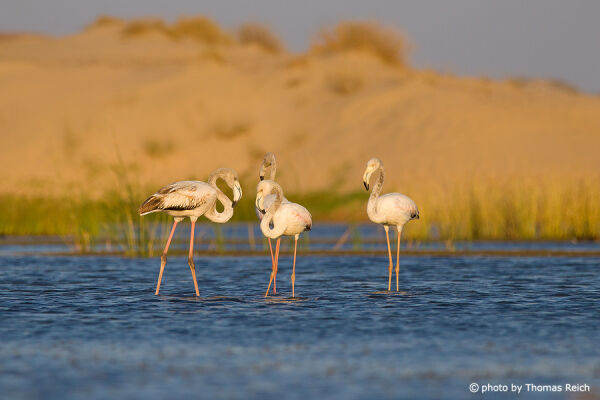 Flamingos are capable flyers, and flamingos in captivity often require wing clipping to prevent escape. A pair of African flamingos which had not yet had their wings clipped escaped from the Wichita, Kansas zoo in 2005. One was spotted in Texas 14 years later. It had been seen previously by birders in Texas, Wisconsin and Louisiana.

Young flamingos hatch with grayish-red plumage, but adults range from light pink to bright red due to aqueous bacteria and beta-carotene obtained from their food supply. A well-fed, healthy flamingo is more vibrantly colored, thus a more desirable mate; a white or pale flamingo, however, is usually unhealthy or malnourished. Captive flamingos are a notable exception; they may turn a pale pink if they are not fed carotene at levels comparable to the wild.

Flamingoes can open their bills by raising the upper jaw as well as by dropping the lower.

Four flamingo species are distributed throughout the Americas, including the Caribbean, and two species are native to Africa, Asia, and Europe.

Flamingos filter-feed on brine shrimp and blue-green algae as well as insect larvae, small insects, mollusks and crustaceans making them omnivores. Their bills are specially adapted to separate mud and silt from the food they eat, and are uniquely used upside-down. The filtering of food items is assisted by hairy structures called lamellae, which line the mandibles, and the large, rough-surfaced tongue. The pink or reddish color of flamingos comes from carotenoids in their diet of animal and plant plankton. American flamingos are a brighter red color because of the beta carotene availability in their food while the lesser flamingos are a paler pink due to ingesting a smaller amount of this pigment. These carotenoids are broken down into pigments by liver enzymes. The source of this varies by species, and affects the color saturation. Flamingos whose sole diet is blue-green algae are darker than those that get it second-hand by eating animals that have digested blue-green algae). 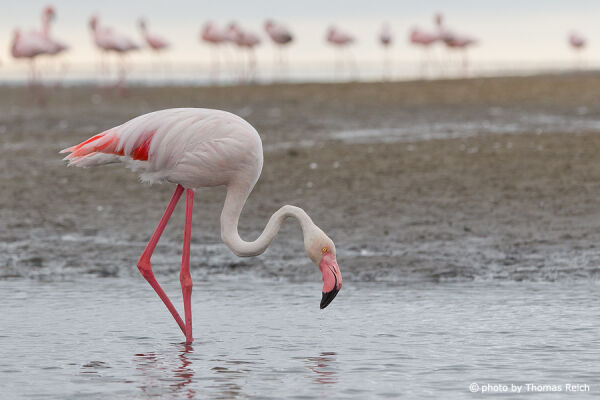 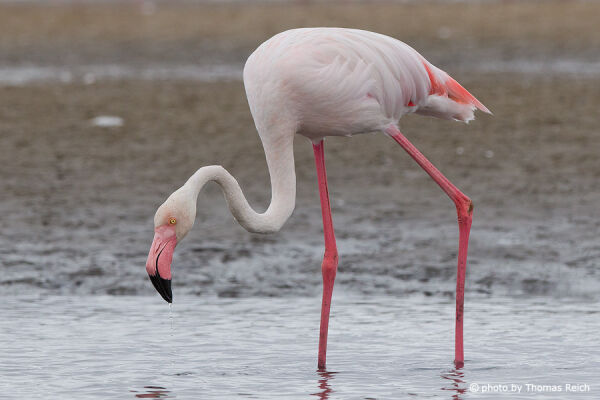 Flamingos are very social birds; they live in colonies whose population can number in the thousands. These large colonies are believed to serve three purposes for the flamingos: avoiding predators, maximizing food intake, and using scarcely suitable nesting sites more efficiently. Before breeding, flamingo colonies split into breeding groups of about 15 to 50 birds. Both males and females in these groups perform synchronized ritual displays. The members of a group stand together and display to each other by stretching their necks upwards, then uttering calls while head-flagging, and then flapping their wings.[30] The displays do not seem directed towards an individual, but occur randomly. These displays stimulate "synchronous nesting" (see below) and help pair up those birds that do not already have mates.

Flamingos form strong pair bonds, although in larger colonies, flamingos sometimes change mates, presumably because more mates are available to choose. Flamingo pairs establish and defend nesting territories. They locate a suitable spot on the mudflat to build a nest (the female usually selects the place). Copulation usually occurs during nest building, which is sometimes interrupted by another flamingo pair trying to commandeer the nesting site for their use. Flamingos aggressively defend their nesting sites. Both the male and the female contribute to building the nest, and to protecting the nest and egg. Same-sex pairs have been reported. 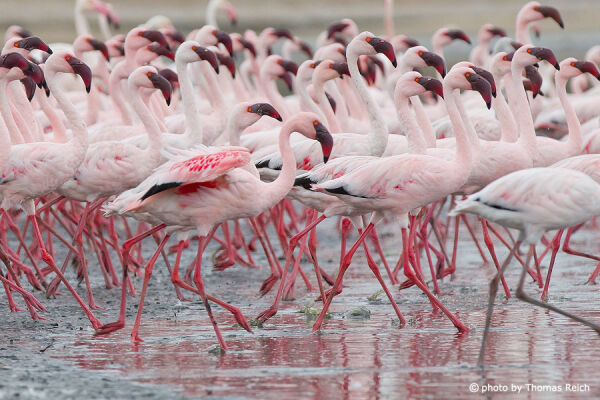 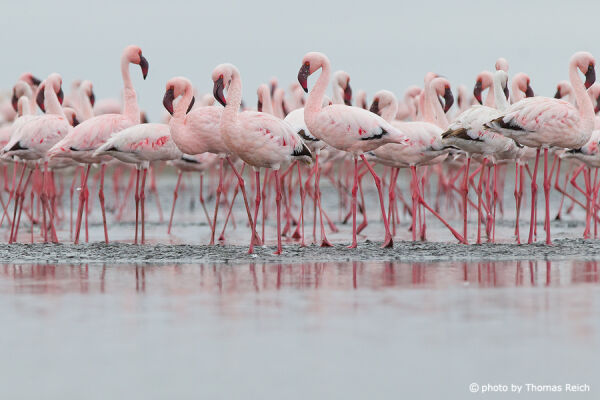 After the chicks hatch, the only parental expense is feeding. Both the male and the female feed their chicks with a kind of crop milk, produced in glands lining the whole of the upper digestive tract (not just the crop). The hormone prolactin stimulates production. The milk contains fat, protein, and red and white blood cells. (Pigeons and doves—Columbidae—also produce crop milk (just in the glands lining the crop), which contains less fat and more protein than flamingo crop milk.)

For the first six days after the chicks hatch, the adults and chicks stay in the nesting sites. At around 7–12 days old, the chicks begin to move out of their nests and explore their surroundings. When they are two weeks old, the chicks congregate in groups, called "microcrèches", and their parents leave them alone. After a while, the microcrèches merge into "crèches" containing thousands of chicks. Chicks that do not stay in their crèches are vulnerable to predators

This text is based on the article Flamingo from the free encyclopedia Wikipedia and is licensed under the Creative Commons CC-BY-SA 3.0 Unported (short version). A list of the authors is available on Wikipedia.