Stock Photos
The southern fiscal, common fiscal or fiscal shrike (Lanius collaris) is a member of the shrike family found through most of Sub-Saharan Africa. It is also sometimes named jackie hangman or butcher bird due to its habit of impaling its prey on acacia thorns to store the food for later consumption. It was previously lumped together with the northern fiscal (Lanius humeralis). Together they were known as the common fiscal.

This is a fairly distinctive 21–23-cm long passerine with white underparts and black upperparts extending from the top of the head down to the tail. The bird has a characteristic white "V" on the back and a relatively long black tail with white outer feathers and white tips on the other feathers. The bill, eyes and legs are black. Adult male and female common fiscals are quite similar except for the rufous lower flank of the female. 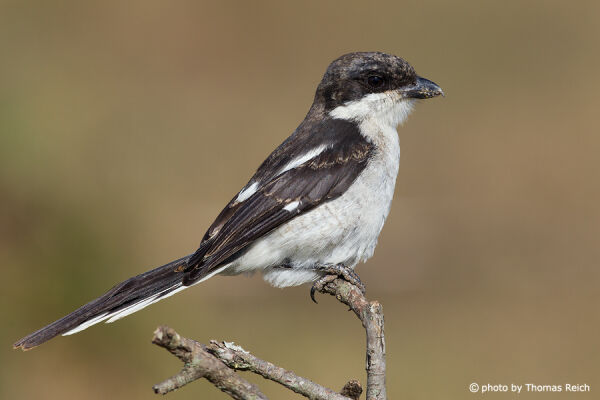 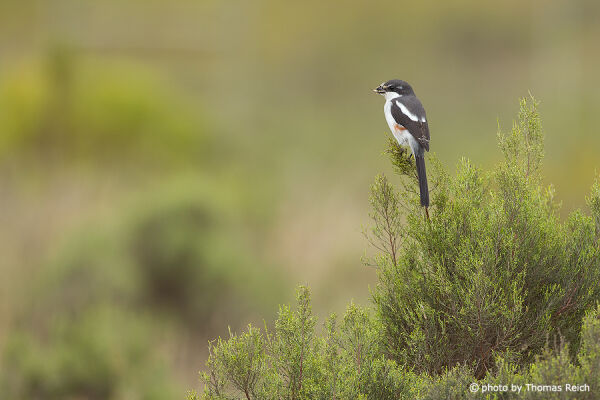 The calls are a jumbled mix of shrike-like swizzling sounds including some imitations and a harsh Dzzzttt-dzzzt-dzzzt alarm call. Most of those calls however are either threatening or alarm calls. The species sometimes produces a surprisingly sweet, quiet song, although such song, however sweet it sounds, generally is either territorial or pair-bonding in function.

The southern fiscal lives in a wide range of habitats from grassland with fences for perching to acacia thornveld or even woodland, but avoids very dense habitats where its hunting would be impaired.

The southern fiscal is usually solitary and hunts insects and small rodents from an exposed perch or the tops of shrubs. Territorial size is directly related to the density of hunting perches. Installing more artificial perches causes the fiscal to reduce its territory size and allow more birds in the affected range.

In eastern Africa, the southern fiscal is a major predator of the plain tiger butterfly.

This text is based on the article Southern fiscal from the free encyclopedia Wikipedia and is licensed under the Creative Commons CC-BY-SA 3.0 Unported (short version). A list of the authors is available on Wikipedia.