Stock Photos
The common blackbird (Turdus merula) is a species of true thrush. It is also called the Eurasian blackbird (especially in North America, to distinguish it from the unrelated New World blackbirds), or simply the blackbird where this does not lead to confusion with a similar-looking local species. It breeds in Europe, Asiatic Russia, and North Africa, and has been introduced to Australia and New Zealand. It has a number of subspecies across its large range; a few of the Asian subspecies are sometimes considered to be full species. Depending on latitude, the common blackbird may be resident, partially migratory, or fully migratory.

The adult male of the common blackbird (Turdus merula merula which is the nominate subspecies), which is found throughout most of Europe, is all black except for a yellow eye-ring and bill and has a rich, melodious song; the adult female and juvenile have mainly dark brown plumage. This species breeds in woods and gardens, building a neat, mud-lined, cup-shaped nest. It is omnivorous, eating a wide range of insects, earthworms, berries, and fruits.

Both sexes are territorial on the breeding grounds, with distinctive threat displays, but are more gregarious during migration and in wintering areas. Pairs stay in their territory throughout the year where the climate is sufficiently temperate. This common and conspicuous species has given rise to a number of literary and cultural references, frequently related to its song.

The common blackbird of the nominate subspecies T. m. merula is 23.5 to 29 centimetres (9.25 to 11.4 in) in length, has a long tail, and weighs 80–125 grams (2.8 to 4.4 oz). The adult male has glossy black plumage, blackish-brown legs, a yellow eye-ring and an orange-yellow bill. The bill darkens somewhat in winter. The adult female is sooty-brown with a dull yellowish-brownish bill, a brownish-white throat and some weak mottling on the breast. The juvenile is similar to the female, but has pale spots on the upperparts, and the very young juvenile also has a speckled breast. Young birds vary in the shade of brown, with darker birds presumably males. The first year male resembles the adult male, but has a dark bill and weaker eye ring, and its folded wing is brown, rather than black like the body plumage. 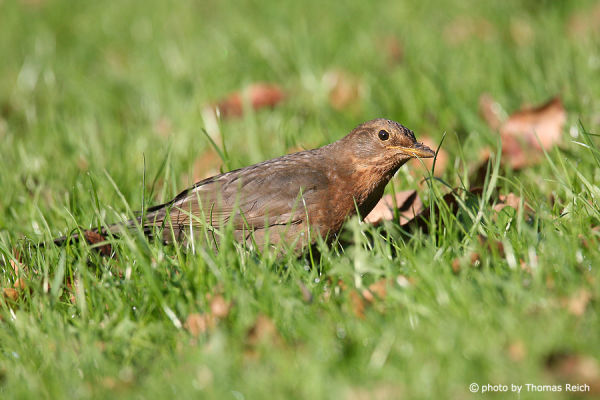 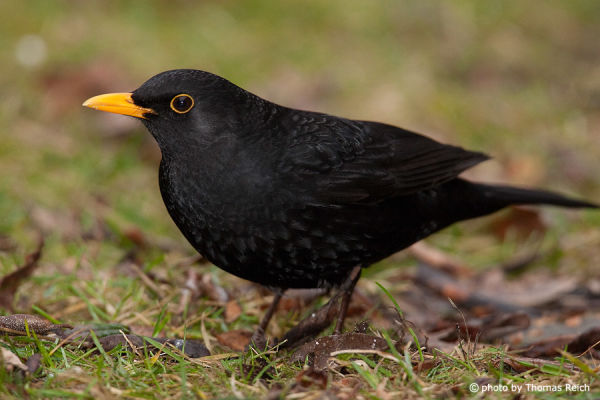 In its native Northern Hemisphere range, the first-year male common blackbird of the nominate race may start singing as early as late January in fine weather in order to establish a territory, followed in late March by the adult male. The male's song is a varied and melodious low-pitched fluted warble, given from trees, rooftops or other elevated perches mainly in the period from March to June, sometimes into the beginning of July. It has a number of other calls, including an aggressive seee, a pook-pook-pook alarm for terrestrial predators like cats, and various chink and chook, chook vocalisations. The territorial male invariably gives chink-chink calls in the evening in an (usually unsuccessful) attempt to deter other blackbirds from roosting in its territory overnight. During the northern winter, blackbirds can be heard quietly singing to themselves, so much so that September and October are the only months in which the song cannot be heard. Like other passerine birds, it has a thin high seee alarm call for threats from birds of prey since the sound is rapidly attenuated in vegetation, making the source difficult to locate.

At least two subspecies, T. m. merula and T. m. nigropileus, will mimic other species of birds, cats, humans or alarms, but this is usually quiet and hard to detect.

The common blackbird breeds in temperate Eurasia, North Africa, the Canary Islands, and South Asia. It has been introduced to Australia and New Zealand. Populations are sedentary in the south and west of the range, although northern birds migrate south as far as northern Africa and tropical Asia in winter. Urban males are more likely to overwinter in cooler climes than rural males, an adaptation made feasible by the warmer microclimate and relatively abundant food that allow the birds to establish territories and start reproducing earlier in the year. Recoveries of blackbirds ringed on the Isle of May show that these birds commonly migrate from southern Norway (or from as far north as Trondheim) to Scotland, and some onwards to Ireland. Scottish-ringed birds have also been recovered in England, Belgium, Holland, Denmark, and Sweden. Female blackbirds in Scotland and the north of England migrate more (to Ireland) in winter than do the males.

Common over most of its range in woodland, the common blackbird has a preference for deciduous trees with dense undergrowth. However, gardens provide the best breeding habitat with up to 7.3 pairs per hectare (nearly three pairs per acre), with woodland typically holding about a tenth of that density, and open and very built-up habitats even less. They are often replaced by the related ring ouzel in areas of higher altitude. The common blackbird also lives in parks, gardens and hedgerows.

This widespread species has occurred as a vagrant in many locations in Eurasia outside its normal range, but records from North America are normally considered to involve escapees, including, for example, the 1971 bird in Quebec. However, a 1994 record from Bonavista, Newfoundland, has been accepted as a genuine wild bird,[8] and the species is therefore on the North American list.

The common blackbird is omnivorous, eating a wide range of insects, earthworms, seeds and berries. It feeds mainly on the ground, running and hopping with a start-stop-start progress. It pulls earthworms from the soil, usually finding them by sight, but sometimes by hearing, and roots through leaf litter for other invertebrates. Small amphibians and lizards are occasionally hunted. This species will also perch in bushes to take berries and collect caterpillars and other active insects. Animal prey predominates, and is particularly important during the breeding season, with windfall apples and berries taken more in the autumn and winter. The nature of the fruit taken depends on what is locally available, and frequently includes exotics in gardens.

Near human habitation the main predator of the common blackbird is the domestic cat, with newly fledged young especially vulnerable. Foxes and predatory birds, such as the sparrowhawk and other accipiters, also take this species when the opportunity arises. However, there is little direct evidence to show that either predation of the adult blackbirds or loss of the eggs and chicks to corvids, such as the European magpie or Eurasian jay, decrease population numbers.

This species is occasionally a host of parasitic cuckoos, such as the common cuckoo (Cuculus canorus), but this is minimal because the common blackbird recognizes the adult of the parasitic species and its non-mimetic eggs. In the UK, only three nests of 59,770 examined (0.005%) contained cuckoo eggs. The introduced merula blackbird in New Zealand, where the cuckoo does not occur, has, over the past 130 years, lost the ability to recognize the adult common cuckoo but still rejects non-mimetic eggs.

As with other passerine birds, parasites are common. 88% of common blackbirds were found to have intestinal parasites, most frequently Isospora and Capillaria species. and more than 80% had haematozoan parasites (Leucocytozoon, Plasmodium, Haemoproteus and Trypanosoma species).

Common blackbirds spend much of their time looking for food on the ground where they can become infested with ticks, which are external parasites that most commonly attach to the head of a blackbird. In France, 74% of rural blackbirds were found to be infested with Ixodes ticks, whereas, only 2% of blackbirds living in urban habitats were infested. This is partly because it is more difficult for ticks to find another host on lawns and gardens in urban areas than in uncultivated rural areas, and partly because ticks are likely to be commoner in rural areas, where a variety of tick hosts, such as foxes, deer and boar, are more numerous. Although ixodid ticks can transmit pathogenic viruses and bacteria, and are known to transmit Borrelia bacteria to birds, there is no evidence that this affects the fitness of blackbirds except when they are exhausted and run down after migration.

The common blackbird is one of a number of species which has unihemispheric slow-wave sleep. One hemisphere of the brain is effectively asleep, while a low-voltage EEG, characteristic of wakefulness, is present in the other. The benefit of this is that the bird can rest in areas of high predation or during long migratory flights, but still retain a degree of alertness.

The male common blackbird attracts the female with a courtship display which consists of oblique runs combined with head-bowing movements, an open beak, and a "strangled" low song. The female remains motionless until she raises her head and tail to permit copulation. This species is monogamous, and the established pair will usually stay together as long as they both survive. Pair separation rates of up to 20% have been noted following poor breeding. Although the species is socially monogamous, there have been studies showing as much as 17% extra-pair paternity.

The nominate T. merula may commence breeding in March, but eastern and Indian races are a month or more later, and the introduced New Zealand birds start nesting in August (late winter). The breeding pair prospect for a suitable nest site in a creeper or bush, favouring evergreen or thorny species such as ivy, holly, hawthorn, honeysuckle or pyracantha. Sometimes the birds will nest in sheds or outbuildings where a ledge or cavity is used. The cup-shaped nest is made with grasses, leaves and other vegetation, bound together with mud. It is built by the female alone. She lays three to five (usually four) bluish-green eggs marked with reddish-brown blotches, heaviest at the larger end; the eggs of nominate T. merula are 2.9×2.1 centimetres (1.14×0.93 in) in size and weigh 7.2 grammes (0.25 oz), of which 6% is shell. Eggs of birds of the southern Indian races are paler than those from the northern subcontinent and Europe.

The female incubates for 12–14 days before the altricial chicks are hatched naked and blind. Fledging takes another 10–19 (average 13.6) days, with both parents feeding the young and removing faecal sacs. The nest is often ill-concealed compared with those of other species, and many breeding attempts fail due to predation. The young are fed by the parents for up to three weeks after leaving the nest, and will follow the adults begging for food. If the female starts another nest, the male alone will feed the fledged young. Second broods are common, with the female reusing the same nest if the brood was successful, and three broods may be raised in the south of the common blackbird's range.

A common blackbird has an average life expectancy of 2.4 years, and, based on data from bird ringing, the oldest recorded age is 21 years and 10 months.

This text is based on the article Common blackbird from the free encyclopedia Wikipedia and is licensed under the Creative Commons CC-BY-SA 3.0 Unported (short version). A list of the authors is available on Wikipedia.