Stock Photos
The humpback whale (Megaptera novaeangliae) is a species of baleen whale. It is one of the larger rorqual species, with adults ranging in length from 12–16 m (39–52 ft) and weighing around 25–30 metric tons (28–33 short tons). The humpback has a distinctive body shape, with long pectoral fins and a knobbly head. It is known for breaching and other distinctive surface behaviors, making it popular with whale watchers. Males produce a complex song lasting 10 to 20 minutes, which they repeat for hours at a time. All the males in a group will produce the same song, which is different each season. Its purpose is not clear, though it may help induce estrus in females.

Found in oceans and seas around the world, humpback whales typically migrate up to 25,000 km (16,000 mi) each year. They feed in polar waters, and migrate to tropical or subtropical waters to breed and give birth, fasting and living off their fat reserves. Their diet consists mostly of krill and small fish. Humpbacks have a diverse repertoire of feeding methods, including the bubble net technique.

Like other large whales, the humpback was a target for the whaling industry. The species was once hunted to the brink of extinction; its population fell by an estimated 90% before a 1966 moratorium. While stocks have partially recovered to some 80,000 animals worldwide, entanglement in fishing gear, collisions with ships and noise pollution continue to affect the species.

Humpbacks can easily be identified by their stocky body, obvious hump, black dorsal coloring and elongated pectoral fins. The head and lower jaw are covered with knobs called tubercles, which are hair follicles and are characteristic of the species. The fluked tail, which typically rises above the surface when diving, has wavy trailing edges.

Ventral grooves run from the lower jaw to the umbilicus, about halfway along the underside of the body. These grooves are less numerous (usually 14–22) than in other rorquals, but are fairly wide.

The female has a hemispherical lobe about 15 cm (5.9 in) in diameter in her genital region. This visually distinguishes males and females.The male's penis usually remains hidden in the genital slit. 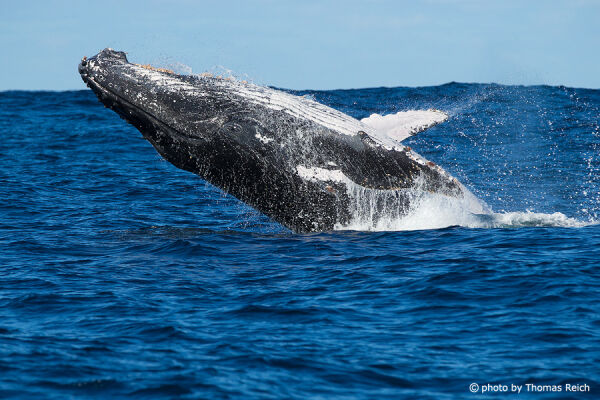 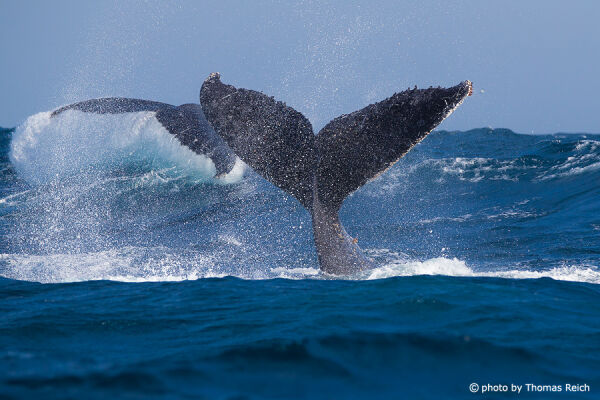 The long black and white tail fin can be up to a third of body length.

Several hypotheses attempt to explain the humpback's pectoral fins, which are proportionally the longest fins of any cetacean. The higher maneuverability afforded by long fins and the usefulness of the increased surface area for temperature control when migrating between warm and cold climates may have supported this adaptation. These very long heavy pectoral fins with a row of knuckle-like knobs along their anterior edges are effective weapons in confrontations with killer whales. Humpbacks frequently defend other animals against attack by predators; for example, they were observed interfering to defend a grey whale calf that had just been killed by killer whales.The large sharp-cornered barnacle Coronula diadema often attaches there, adding a natural equivalent of knuckledusters.

The lifespan of rorquals ranges from 45 to 100 years.

Humpbacks inhabit all major oceans, in a wide band running from the Antarctic ice edge to 81°N latitude. The four global populations are North Pacific, Atlantic, Southern Ocean and Indian Ocean populations. These populations are distinct. Although the species has cosmopolitan distribution and is usually not considered to cross the equator line, seasonal observations at Cape Verde suggest possible interactions among populations from both hemispheres. Aside from the Arabian Sea group, year-round presences have been confirmed among British and Norwegian waters. Parts of wintering grounds around the globe have been poorly studied or being undetected, such as around Pitcairn Islands, Northern Mariana Islands (e.g. Marpi and CK Reefs vicinity to Saipan), Volcano Islands, Pasaleng Bay, Trindade and Martin Vaz, Mauritius, and Aldabra.

Whales were once uncommon in the Mediterranean and the Baltic Seas, but have increased their presence in both waters as global populations have recovered. Recent increases within the Mediterranean basin, including re-sightings, indicate that more whales may migrate into the inland sea in the future, not only for wintering but also for feeding. Humpbacks are also showing signs of re-expanding into former ranges, such as Scotland, Skagerrak and Kattegat, as well as Scandinavian fjords such as Kvænangen, where they had not been observed for decades.

In the North Atlantic, feeding areas range from Scandinavia to New England. Breeding occurs in the Caribbean and Cape Verde. In the South Atlantic and Indian Oceans, whales may breed off Brazil, as well the coasts of central, southern and southeastern Africa (including Madagascar). Whale visits into Gulf of Mexico have been infrequent, but occurred in the gulf historically. In the South Atlantic, about 10% of world population of the species possibly migrate to the Gulf of Guinea. Comparison of songs between those at Cape Lopez and Abrolhos Archipelago indicate that trans-Atlantic mixings between western and southeastern populations occur.

A large population spreads across the Hawaiian Islands every winter, ranging from the island of Hawaii in the south to Kure Atoll in the north. These animals feed in areas ranging from the coast of California to the Bering Sea. Humpbacks were first observed in Hawaiian waters in the mid-19th century and might have gained a dominance over North Pacific right whales, as the right whales were hunted to near-extinction.

A 2007 study identified seven individuals then wintering off the Pacific coast of Costa Rica as having traveled from the Antarctic—around 8,300 km (5,200 mi). Identified by their unique tail patterns, these animals made the longest documented mammalian migration. In Australia, two main migratory populations were identified, off the west and east coasts. These two populations are distinct, with only a few females in each generation crossing between the two groups.

In Panama and Costa Rica, humpback whales come from both the Southern Hemisphere (July–October with over 2,000 whales) and the Northern Hemisphere (December–March numbering about 300). South Pacific populations migrating off mainland New Zealand, Kermadec Islands, and Tasmania are increasing, but less rapidly than in Australian waters because of illegal whaling by the Soviet Union in the 1970s.

Some recolonizing habitats are confirmed, especially in the North and South Atlantic (e.g. English and Irish coasts, English Channel) to coasts in the north such as the North Sea and Wadden Sea, where the first confirmed sighting since 1755 was made in 2003, South Pacific (e.g. New Zealand coasts and Niue), pelagic islands of Chile such as Isla Salas y Gómez and Easter Island, where possibilities of undocumented wintering grounds have been considered, southern fiords of Chile and Peru (e.g. Gulf of Penas, Strait of Magellan, Beagle Channel) and in Asia, such as in the Philippines, Babuyan Islands, Cagayan (the first modern mortality of the species in the nation was in 2007), Calayan and Pasaleng Bay, the Ryukyu Islands, the Volcano Islands in Japan, the Northern Mariana Islands recently again became stable/growing wintering grounds while the Marshall Islands, Vietnamese, Taiwanese and Chinese coasts show slow or no obvious recovery. In 2020, A whale has been spotted wandering at Saint Lawrence River in Montreal[88] and a Migaloo in Australian waters

Humpbacks feed primarily in summer and live off fat reserves during winter.They feed only rarely and opportunistically in their wintering waters. The humpback is an energetic hunter, taking krill and small schooling fish such as juvenile Atlantic and Pacific salmon, herring, capelin and American sand lance, as well as Atlantic mackerel, pollock, haddock and Atlantic menhaden in the North Atlantic. They have been documented opportunistically feeding near fish hatcheries in Southeast Alaska, feasting on salmon fry released from the hatcheries. Krill and copepods are prey species in Australian and Antarctic waters. Humpbacks hunt by direct attack or by stunning prey by hitting the water with pectoral fins or flukes.

he humpback has the most diverse hunting repertoire of all baleen whales. Its most inventive technique is known as bubble net feeding; a group of whales swims in a shrinking circle blowing bubbles below a school of prey. The shrinking ring of bubbles encircles the school and confines it in an ever-smaller cylinder. This ring can begin near 30 m (98 ft) in diameter and involve the cooperation of a dozen animals. Using a crittercam attached to a whale's back, researchers found that some whales blow the bubbles, some dive deeper to drive fish toward the surface and others herd prey into the net by vocalizing. The whales then suddenly swim upward through the "net", mouths agape, swallowing thousands of fish in one gulp. The water is then squeezed out through baleen plates in the mouth to filter out the prey.

So-called lobtail feeding was observed in the North Atlantic. This technique involves the whale slapping the surface of the ocean with its tail between one and four times before creating the bubble net. Using network-based diffusion analysis, the study authors argued that these whales learned the behavior from other whales in the group over a period of 27 years in response to a change in the primary form of prey.

Courtship rituals take place during the winter months, following migration toward the equator from summer feeding grounds closer to the poles. Competition is usually fierce. Unrelated males, dubbed escorts, frequently trail females, as well as cow-calf pairs. Males gather into competitive groups around a female and fight for the right to mate with her. Group size ebbs and flows as unsuccessful males retreat and others arrive. Behaviors include breaching, spyhopping, lob-tailing, tail-slapping, pectoral fin-slapping, peduncle throws, charging and parrying.

Whale song is thought to have an important role in inducing estrus in females and in mate selection; however, it may also be used between males to establish dominance. Humpback whales are polyandrous, with a female having multiple male partners over the course of her lifespan.

Females typically breed every two or three years. The gestation period is 11.5 months. The peak months for birth are January and February in the Northern Hemisphere, July and August in the Southern Hemisphere. Females wait for one to two years before breeding again. Recent research on mitochondrial DNA reveals that groups living in proximity to each other may represent distinct breeding pools. Humpback whale births have been rarely observed. One birth witnessed off Madagascar occurred within four minutes. Humpback whales have been known to hybridize with other rorquals; there is a well-documented report of a humpback-blue whale hybrid in the South Pacific.

This text is based on the article Humpback whale from the free encyclopedia Wikipedia and is licensed under the Creative Commons CC-BY-SA 3.0 Unported (short version). A list of the authors is available on Wikipedia.