Stock Photos
The alpine salamander (Salamandra atra) is a shiny black salamander. No differences in length are seen between the sexes (9–14 cm (3.5–5.5 in)) and the sex ratio is 1:1. Their life expectancy is at least 10 years. Unlike other salamanders, whose larvae are developed in water, the alpine salamander is a fully terrestrial species. Capture-recapture methods suggest that the species is very stationary; 12 m (39 ft) was the maximum observed distance travelled by one individual during the summer season. About 120 individuals per hectare were counted in most suitable areas with >2000 individuals/ha also observed, suggesting that this rather cryptic species is quite abundant.

Total length up to 144 mm for males, up to 151 mm for females. Slightly elongated head, with two large kidney-shaped paratoid glands. The body has 11-13 costal grooves on either side. The tail is square in cross-section. One double row of poison glands runs down the center of the back. One single row of poison glands runs along either side of the body onto the tail. Usually black or brown-black, but the subspecies Salamandra atra aurorae has a bright coloration on the head, back, and dorsal side of the extremities. This coloration can consist of continuous patches or be spotted or blotched. It can vary in color from whitish or yellow to greenish or gray. Males have a slightly more pronounced cloaca than females. 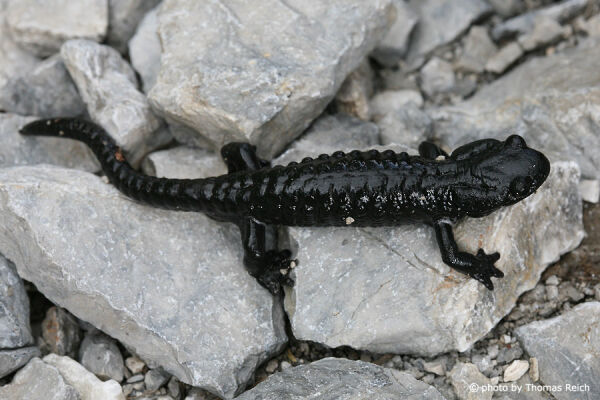 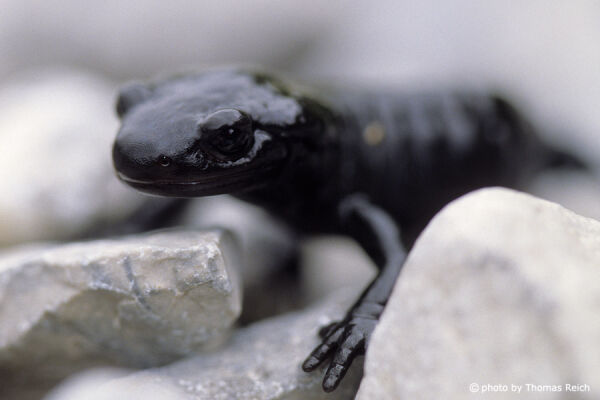 Found in the Alps from the Swiss-French border at the western end of its range through Austria to the Dinaric Alps at the eastern end of its range, at altitudes above 700 m (2,300 ft). The western Alps (in France) are inhabited by a similar species, Lanza's alpine salamander (Salamandra lanzai), in only one small area.

Mating occurs on land, the male clasping the female at the fore legs, and the fertilization is internal. S. atra is a viviparous amphibian, giving birth to two live young, or rarely three or four. They may measure as long as 50 mm (2.0 in) at birth, with the female measuring only 120 mm (4.7 in). The uterine eggs are large and numerous, but, as a rule, only one fully develops in each uterus, the embryo being nourished on the yolk of the other eggs, which more or less dissolve to form a large mass of nutrient matter. The embryo passes through three stages:

1. still enclosed within the egg and living on its own yolk
2. free, within the vitelline mass, which is directly swallowed by the mouth
3. with no more vitelline mass, the embryo is possessed of long external gills, which serve as an exchange of nutritive fluid through the maternal uterus, these gills functioning in the same way as the chorionic villi of the mammalian egg

This text is based on the article Alpine salamander from the free encyclopedia Wikipedia and is licensed under the Creative Commons CC-BY-SA 3.0 Unported (short version). A list of the authors is available on Wikipedia.