This is an undistinguished looking bird with long wings and tail. The adults have grey-brown upperparts and whitish underparts, with a streaked crown and breast, giving rise to the bird's common name. The legs are short and black, and the bill is black and has the broad but pointed shape typical of aerial insectivores. Juveniles are browner than adults and have spots on the upperparts.

The spotted flycatcher is a small slim bird, around 14.5 cm (5.7 in) in length, with a weight of 14–20 g (0.49–0.71 oz). It has dull grey-brown upperparts and off-white underparts. The crown, throat and breast are streaked with brown while the wings and tail feathers are edged with paler thin margins. The subspecies M. s. tyrrhenica has paler and warmer plumage on the upperparts, with more diffuse markings on the head and breast. The sexes are alike. Juveniles have ochre-buff spots above and scaly brown spots below. Their upright posture is characteristic. Most passerines moult their primary flight feathers in sequence beginning near the body and proceeding outwards along the wing. The spotted flycatcher is unusual in replacing the outer flight feathers before those nearer the body. 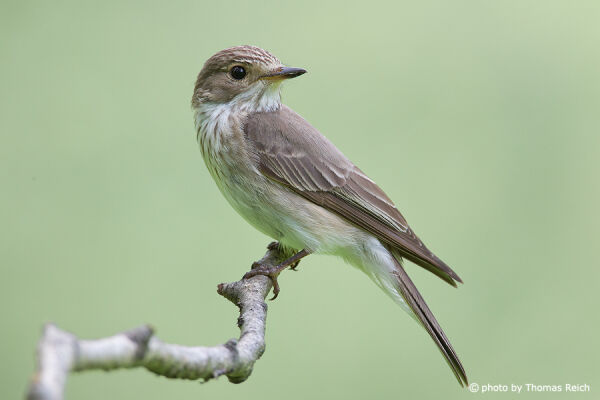 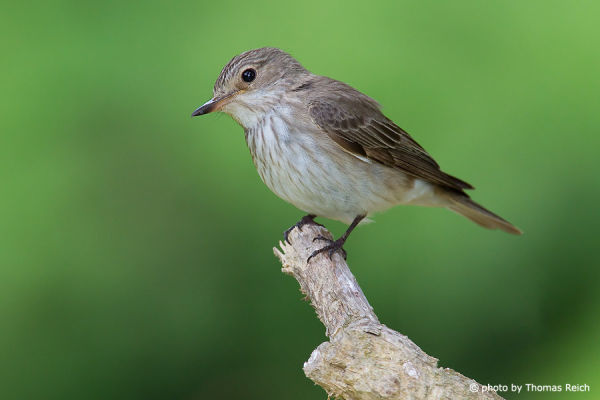 The flycatcher's call is a thin, drawn out soft and high pitched tssssseeeeeppppp, slightly descending in pitch.

It breeds in most of Europe and in the Palearctic to Siberia, and is migratory, wintering in Africa and south western Asia. It is declining in parts of its range. They are birds of deciduous woodlands, parks and gardens, with a preference for open areas amongst trees.

They build an open nest in a suitable recess, often against a wall, and will readily adapt to an open-fronted nest box. 4-6 eggs are laid.

Most European birds cannot discriminate between their own eggs and those of other species. The exception to this are the hosts of the common cuckoo, which have had to evolve this skill as a protection against that nest parasite. The spotted flycatcher shows excellent egg recognition, and it is likely that it was once a host of the cuckoo, but became so good at recognising the intruder's eggs that it ceased to be victimised. A contrast to this is the dunnock, which appears to be a recent cuckoo host, since it does not show any egg discrimination.

This text is based on the article Spotted flycatcher from the free encyclopedia Wikipedia and is licensed under the Creative Commons CC-BY-SA 3.0 Unported (short version). A list of the authors is available on Wikipedia.