Stock Photos
The black redstart (Phoenicurus ochruros) is a small passerine bird in the redstart genus Phoenicurus. Like its relatives, it was formerly classed as a member of the thrush family (Turdidae), but is now known to be an Old World flycatcher (Muscicapidae). Other common names are Tithy's redstart, blackstart and black redtail.

The male has a rattling song and a tick call.

It is a widespread breeder in south and central Europe and Asia and north-west Africa, from Great Britain and Ireland (where local) south to Morocco, east to central China. It is resident in the milder parts of its range, but north-eastern birds migrate to winter in southern and western Europe and Asia, and north Africa. It nests in crevices or holes in buildings.

In Britain, it is most common as a passage and winter visitor, with only 20–50 pairs breeding. On passage it is fairly common on the east and south coasts, and in winter on the coasts of Wales and western and southern England, with a few also at inland sites. Migrant black redstarts arrive in Britain in October or November and either move on or remain to winter, returning eastward in March or April. They also winter on the south and east coasts of Ireland.

The species originally inhabited stony ground in mountains, particularly cliffs, but since about 1900 has expanded to include similar urban habitats including bombed areas during and after World War II, and large industrial complexes that have the bare areas and cliff-like buildings it favours; in Great Britain, most of the small breeding population nests in such industrial areas. Its quick ducks of head and body are robin-like, and its tail is often flicked.

It will catch passing insects in flight, and migrants often hunt in coastal tide-wrack for flies or tiny crustaceans.

The black redstart is socially monogamous. A male pairs with a female to rear young, guards her against other males, and mates with other females. 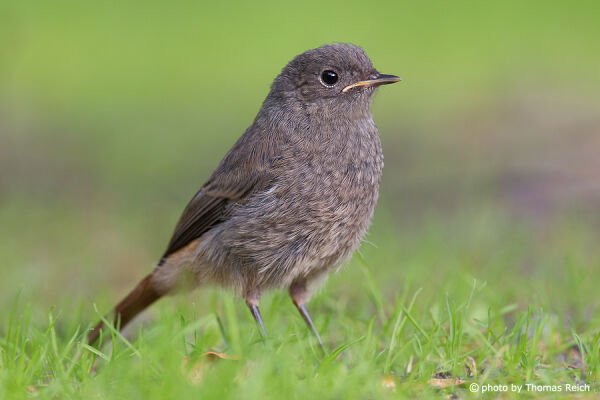 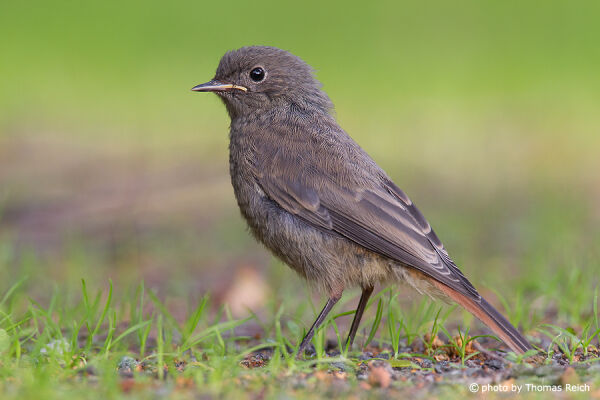 This text is based on the article Black redstart from the free encyclopedia Wikipedia and is licensed under the Creative Commons CC-BY-SA 3.0 Unported (short version). A list of the authors is available on Wikipedia.