Stock Photos
The European bee-eater (Merops apiaster) is a near passerine bird in the bee-eater family, Meropidae.

This species, like other bee-eaters, is a richly coloured, slender bird. It has brown and yellow upper parts, whilst the wings are green and the beak is black. It can reach a length of 27–29 cm (10.6–11.4 in), including the two elongated central tail feathers. Sexes are alike. Female tends to have greener rather than gold feathers on shoulders. Non-breeding plumage is much duller and with a blue-green back and no elongated central tail feathers. Juvenile resembles a non-breeding adult, but with less variation in the feather colours. Adults begin to moult in June or July and complete the process by August or September. There is a further moult into breeding plumage in winter in Africa.

It breeds in southern Europe and in parts of north Africa and western Asia. It is strongly migratory, wintering in tropical Africa. This species occurs as a spring overshoot north of its range, with occasional breeding in northwest Europe.

This bird breeds in open country in warmer climates. As the name suggests, bee-eaters predominantly eat insects, especially bees, wasps, and hornets. They catch insects in flight, in sorties from an open perch. Before eating a bee, the European bee-eater removes the sting by repeatedly hitting the insect on a hard surface. It can eat around 250 bees a day.

The most important prey item in their diet is Hymenoptera, mostly Apis mellifera. A study in Spain found that these comprise 69.4% to 82% of the European bee-eaters' diet. Their impact on bee populations, however, is small. They eat less than 1% of the worker bees in areas where they live.

A study found that European bee-eaters "convert food to body weight more efficiently if they are fed a mixture of bees and dragonflies than if they eat only bees or only dragonflies."

If an apiary is set up close to a bee-eater colony, a larger number of honey bees are eaten because they are more abundant. However, studies show the bee-eaters do not intentionally fly into the apiary, rather they feed on the insects caught on pastures and meadows within a radius of 12 km (7.5 mi) from the colony, this maximum distance being reached only when there is a lack of food. Observations show that the birds actually enter the apiary only in cold and rainy periods, when the bees do not leave the hive and other insect prey are harder for the bee-eaters to detect.

Many bee-keepers believe that the bee-eaters are the main obstacle causing worker bees not to forage, and instead stay inside the hives for much of the day between May and the end of August. However, a study carried out in eucalyptus forest in the Alalous region, 80 km (50 mi) east of Tripoli Libya, showed that the bee-eaters were not the main obstacle of bee foraging, which is the opposite of what beekeepers think. The foraging rate was higher in presence of the birds than in their absence in some cases. The average bird meal consisted of 90.8 % honey bees and 9.2 % beetles.

Predation is more likely when the bees are queening or during peak migrations, from late March till mid-April, and in mid-September. Hives close to or under trees or overhead cables are also at increased risk as the birds pounce on flying insects from these perches. 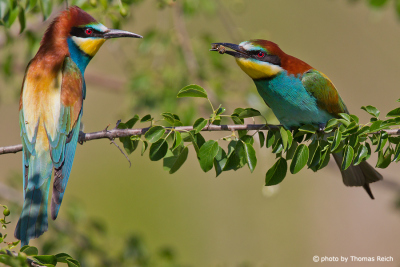 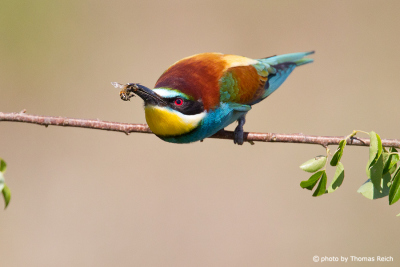 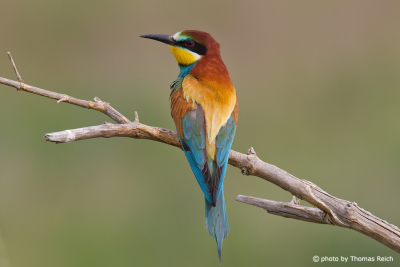 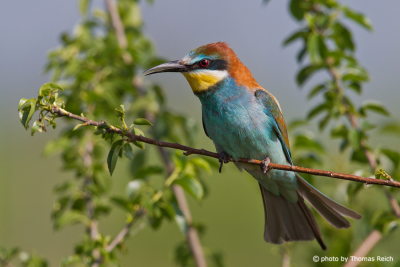 These bee-eaters are gregarious—nesting colonially in sandy banks, preferably near river shores, usually at the beginning of May. They make a relatively long tunnel, in which they lay five to eight spherical white eggs around the beginning of June. Both male and female care for the eggs, which they brood for about three weeks. They also feed and roost communally.

During courtship, the male feeds large items to the female while eating the small ones himself. Most males are monogamous, but occasional bigamy has been encountered. Their typical call is a distinctive, mellow, liquid and burry prreee or prruup.

This text is based on the article European bee-eater from the free encyclopedia Wikipedia and is licensed under the Creative Commons CC-BY-SA 3.0 Unported (short version). A list of the authors is available on Wikipedia.