Stock Photos
The bar-tailed godwit (Limosa lapponica) is a large wader in the family Scolopacidae, which feeds on bristle-worms and shellfish on coastal mudflats and estuaries. It has distinctive red breeding plumage, long legs, and a long upturned bill. Bar-tailed godwits breed on Arctic coasts and tundra from Scandinavia to Alaska, and overwinter on coasts in temperate and tropical regions of the Old World, Australia and New Zealand. The migration of the subspecies Limosa lapponica baueri from across the Pacific Ocean from Alaska to New Zealand is the longest known non-stop flight of any bird, and also the longest journey without pausing to feed by any animal. The round-trip migration for this subspecies is over 29,000 km.

The bar-tailed godwit is a relatively short-legged species of godwit. The bill-to-tail length is 37–41 cm (15–16 in), with a wingspan of 70–80 cm (28–31 in). Males average smaller than females but with much overlap; males weigh 190–400 g (6.7–14.1 oz), while females weigh 260–630 g (9.2–22.2 oz); there is also some regional variation in size (see subspecies, below). The adult has blue-grey legs and a long, tapering, slightly upturned bi-colored bill: pink at the base and black towards the tip. The neck, breast and belly are unbroken brick red in breeding plumage, and dark brown above. Females breeding plumage is much duller than males, with a chestnut to cinnamon belly. Breeding plumage is not fully apparent until the third year, and there are three distinguishable age classes; during their first migration north immature males are noticeably paler in colour than more mature males. Non-breeding birds seen in the Southern Hemisphere are plain grey-brown with darker feather centres, giving them a striped look, and are whitish underneath. Juveniles are similar to non-breeding adults but more buff overall with streaked plumages on flanks and breast. 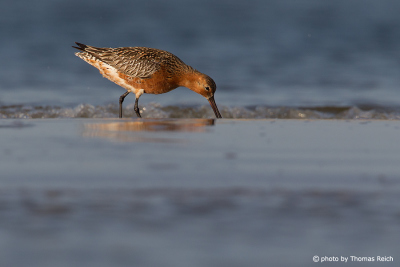 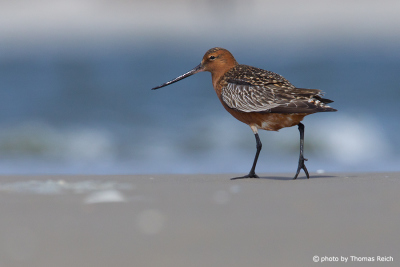 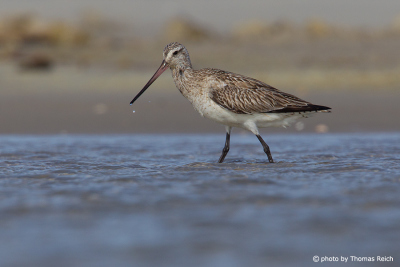 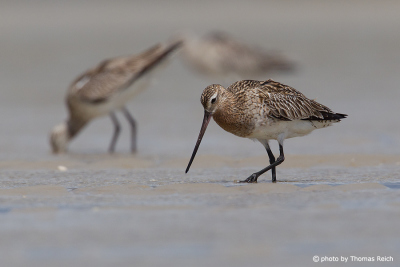 Alaska-breeding bar-tailed godwits show an increase in body size from north to south, but this trend is not apparent in their non-breeding grounds in New Zealand; birds of different sizes mix freely.

Limosa lapponica is distinguished from the black-tailed godwit (Limosa limosa) by its black-and-white horizontally-barred (rather than wholly black) tail, and lack of white wing bars. The most similar species is the Asiatic dowitcher (Limnodromus semipalmatus).

There are now five generally accepted subspecies of bar-tailed godwit, listed from west to east:

All bar-tailed godwits spend the Northern Hemisphere summer in the Arctic, where they breed, and make a long-distance migration south in winter to more temperate areas. L. l. lapponica make the shortest migration, some only as far as the North Sea, while others travel as far as India. Bar-tailed godwits nesting in Alaska (L. l. baueri) travel all the way to Australia and New Zealand. They undertake the longest non-stop migrations of any bird, and to fuel this carry the greatest fat loads of any migratory bird so far studied, reducing the size of their digestive organs to do so.

L. l. bauri breeds in Alaska and spends the non-breeding season in eastern Australia and New Zealand. L. l. menzbieri breeds in Siberia and migrates to northern and western Australia. Birds breeding in Siberia follow the coast of Asia northwards and southwards, but those breeding in Alaska migrate directly across the Pacific to Australasia 11,000 km away. To track the return journey, seven birds in New Zealand were tagged with surgically-implanted transmitters and tracked by satellite to the Yellow Sea in China, a distance of 9,575 km (5,950 mi); the actual track flown by one bird was 11,026 km (6,851 mi), taking nine days. At least three other bar-tailed godwits also appear to have reached the Yellow Sea after non-stop flights from New Zealand.

One specific female of the flock, nicknamed "E7", flew onward from China to Alaska and stayed there for the breeding season. Then in August 2007 she departed on an eight-day non-stop flight from western Alaska to the Piako River near Thames, New Zealand, setting a new known flight record of 11,680 km (7,258 mi). This L. l. bauri female made a 174 day round-trip journey of 29,280 km with 20 days of flying.

To fuel such long journeys, L. l. baueri birds in New Zealand deposit much more fat for their body size than other subspecies, allowing them to fly 6,000 to 8,600 km. Both Australasian subspecies head north to their breeding grounds along the coast of Asia to the Yalu Jiang coastal wetland in the north Yellow Sea, the most important staging grounds for godwits and great knots (Calidris tenuirostris) in their northern migration. Baueri birds rested for about 41 days before continuing approximately 7000 km on to Alaska. Menzbieri spent on average 38 days in the Yellow Sea region and flew an additional 4100 km to high Arctic Russia.

Birds will often depart early from New Zealand if there are favourable winds; they seem to be able to predict weather patterns that will assist them on the entire migration route. Birds that had nested in southern Alaska were larger and departed New Zealand earliest; this pattern was repeated six months later, with birds departing Alaska in the same order they arrived, and over the same span of days.Birds in southern New Zealand departed on average 9–11 days earlier than birds in more northern sites.[ Godwits arrive at the Yukon-Kuskokwim Delta in Alaska in two waves; local breeders in early May, and larger flocks in the third week of May en route to breeding grounds further north.

The birds' main source of food in wetlands is bristle-worms (up to 70%), supplemented by small bivalves and crustaceans. In wet pastures, bar-tailed godwits eat invertebrates. In a major staging site in the northern Yellow Sea, they continue to hunt polychaetes, but most of their food intake is the bivalve mollusc Potamocorbula laevis, which they generally swallow whole.

Male bar-tailed godwits are smaller than females and have shorter bills. In a study at the Manawatū Estuary, shorter-billed birds (males) fed mostly on small surface prey like Potamopyrgus snails, half being snail specialists, whereas females consumed more deeply-buried prey such as worms; the birds also displayed some individual food preferences.

The bar-tailed godwit is a non-breeding migrant in Australia and New Zealand. Birds first depart for their northern hemisphere breeding sites at age 2–4. Breeding take place each year in Scandinavia, northern Asia, and Alaska. The nest is a shallow cup in moss sometimes lined with vegetation. Clutch size is from 2 to 5, averaging four. Both sexes share incubation of the eggs for 20 to 21 days, the female during the day and the male at night.

This text is based on the article Bar-tailed godwit from the free encyclopedia Wikipedia and is licensed under the Creative Commons CC-BY-SA 3.0 Unported (short version). A list of the authors is available on Wikipedia.