Stock Photos
The Eurasian skylark (Alauda arvensis) is a passerine bird in the lark family, Alaudidae. It is a widespread species found across Europe and the Palearctic with introduced populations in New Zealand, Australia and on the Hawaiian Islands. It is a bird of open farmland and heath, known for the song of the male, which is delivered in hovering flight from heights of 50 to 100 metres (160 to 330 ft). The sexes are alike. It is streaked greyish-brown above and on the breast and has a buff-white belly.

The female Eurasian skylark builds an open nest in a shallow depression on open ground well away from trees, bushes and hedges. She lays three to five eggs which she incubates for around 11 days. The chicks are fed by both parents but leave the nest after eight to ten days, well before they can fly. They scatter and hide in the vegetation but continue to be fed by the parents until they can fly at 18 to 20 days of age. Nests are subject to high predation rates by larger birds and small mammals. The parents can have several broods in a single season.

The Eurasian skylark is 18–19 cm (7.1–7.5 in) in length. Like most other larks, the Eurasian skylark is a rather dull-looking species, being mainly brown above and paler below. It has a short blunt crest on the head, which can be raised and lowered. In flight it shows a short tail and short broad wings. The tail and the rear edge of the wings are edged with white, which are visible when the bird is flying away, but not if it is heading towards the observer. The male has broader wings than the female. This adaptation for more efficient hovering flight may have evolved because of female Eurasian skylarks' preference for males that sing and hover for longer periods and so demonstrate that they are likely to have good overall fitness. 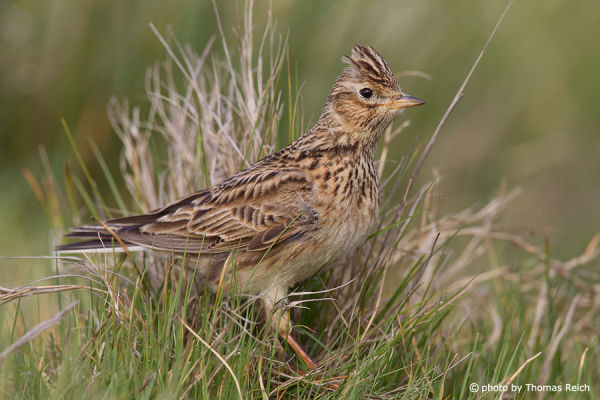 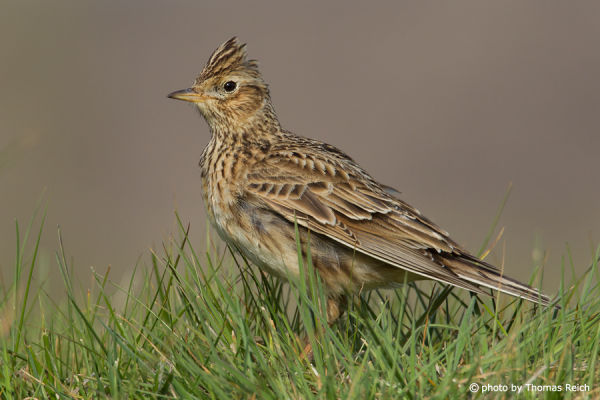 It is known for the song of the male, which is delivered in hovering flight from heights of 50 to 100 m, when the singing bird may appear as just a dot in the sky from the ground. The long, unbroken song is a clear, bubbling warble delivered high in the air while the bird is rising, circling or hovering. The song generally lasts two to three minutes, but it tends to last longer later in the mating season, when songs can last for 20 minutes or more. At wind farm sites, male skylarks have been found to sing at higher frequencies as a result of wind turbine noise.

This lark breeds across most of Europe and Asia and in the mountains of north Africa. It is mainly resident in the west of its range, but eastern populations are more migratory, moving further south in winter. Even in the milder west of its range, many birds move to lowlands and the coast in winter. Asian birds, subspecies A. a. pekinensis, appear as vagrants in Alaska.

The Eurasian skylark walks over the ground searching for food on the soil surface. Its diet consists of insects and plant material such as seeds and young leaves. Unlike a finch (family Fringillidae) it swallows seeds without removing the husk. Insects form an important part of the diet in summer.

Eurasian skylarks first breed when they are one year of age. Nesting may start in late March or early April. The nest is probably built by the female alone and is a shallow depression in the ground lined with grasses. The clutch is 3 to 5 eggs. The eggs of the nominate subspecies average 23.4 mm × 16.8 mm (0.92 in × 0.66 in) in size and weigh around 3.35 g (0.118 oz). They have a grey-white or greenish background and are covered in brown or olive spots. They are incubated only by the female beginning after the last egg is laid and hatch synchronously after 11 days. The altricial young are cared for by both parents and for the first week are fed almost exclusively on insects. The nestlings fledge after 18 to 20 days but they usually leave the nest after 8 to 10 days. They are independent of their parents after around 25 days. The parents can have up to 4 broods in a season.

This text is based on the article Eurasian skylark from the free encyclopedia Wikipedia and is licensed under the Creative Commons CC-BY-SA 3.0 Unported (short version). A list of the authors is available on Wikipedia.