Stock Photos
The European greenfinch or simply the greenfinch (Chloris chloris) is a small passerine bird in the finch family Fringillidae.

The European greenfinch is 15 cm (5.9 in) long with a wing span of 24.5 to 27.5 cm (9.6 to 10.8 in). It is similar in size and shape to a house sparrow, but is mainly green, with yellow in the wings and tail. The female and young birds are duller and have brown tones on the back. The bill is thick and conical. This species can form large flocks outside the breeding season, sometimes mixing with other finches and buntings. 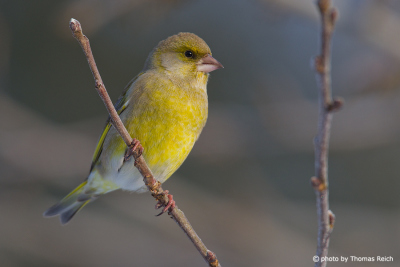 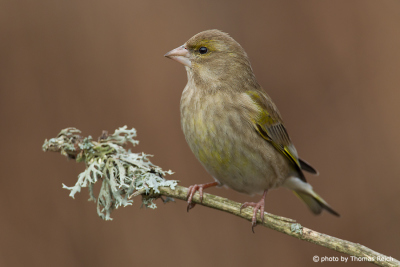 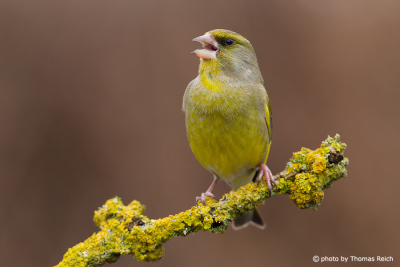 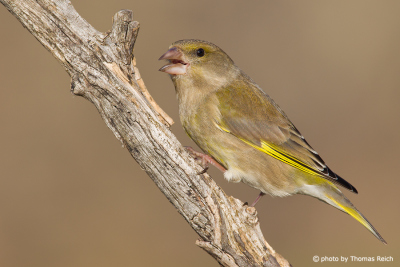 The song contains a lot of trilling twitters interspersed with wheezes, and the male has a "butterfly" display flight.

This bird is widespread throughout Europe, north Africa and Southwest Asia. It is mainly resident, but some northernmost populations migrate further south. The greenfinch has also been introduced into Australia, New Zealand, Uruguay, and Argentina. In Malta, it is considered a prestigious songbird, and it has been trapped for many years. It has been domesticated, and many Maltese people breed them. In Hungary, it is threatened. Woodland edges, farmland hedges and gardens with relatively thick vegetation are favoured for breeding.

They feed largely on seeds, but also take berries.

Breeding season occurs in spring, starting in the second half of March, until June, with fledging young in early July. Incubation lasts about 13–14 days, by the female. The male feeds her at the nest during this period. Chicks are covered with thick, long, greyish-white down at hatching. They are fed on insect larvae by both adults during the first days, and later, by a frequently regurgitated yellowish paste made of seeds. They leave the nest about 13 days later, but they are not able to fly. Usually, they fledge 16–18 days after hatching. This species produces two or three broods per year.

In Australasia, the European greenfinch's breeding season is from October to March.

This text is based on the article European greenfinch from the free encyclopedia Wikipedia and is licensed under the Creative Commons CC-BY-SA 3.0 Unported (short version). A list of the authors is available on Wikipedia.