Stock Photos
The Eurasian blue tit (Cyanistes caeruleus) is a small passerine bird in the tit family, Paridae. It is easily recognisable by its blue and yellow plumage and small size.

Eurasian blue tits, usually resident and non-migratory birds, are widespread and a common resident breeder throughout temperate and subarctic Europe and the western Palearctic in deciduous or mixed woodlands with a high proportion of oak. They usually nest in tree holes, although they easily adapt to nest boxes where necessary. Their main rival for nests and in the search for food is the larger and more common great tit.

The Eurasian blue tit prefers insects and spiders for its diet. Outside the breeding season, they also eat seeds and other vegetable-based foods. The birds are famed for their acrobatic skills, as they can cling to the outermost branches and hang upside down when looking for food.

The Eurasian blue tit is usually 12 cm (4.7 in), long with a wingspan of 18 cm (7.1 in) for both sexes, and weighs about 11 g (0.39 oz). A typical Eurasian blue tit has an azure-blue crown and dark blue line passing through the eye, and encircling the white cheeks to the chin, giving the bird a very distinctive appearance. The forehead and a bar on the wing are white. The nape, wings and tail are blue and the back is yellowish green. The underparts is mostly sulphur-yellow with a dark line down the abdomen—the yellowness is indicative of the number of yellowy-green caterpillars eaten, due to high levels of carotene pigments in the diet. The bill is black, the legs bluish grey, and the irides dark brown. The sexes are similar, but under ultraviolet light, males have a brighter blue crown. Young blue tits are noticeably more yellow. 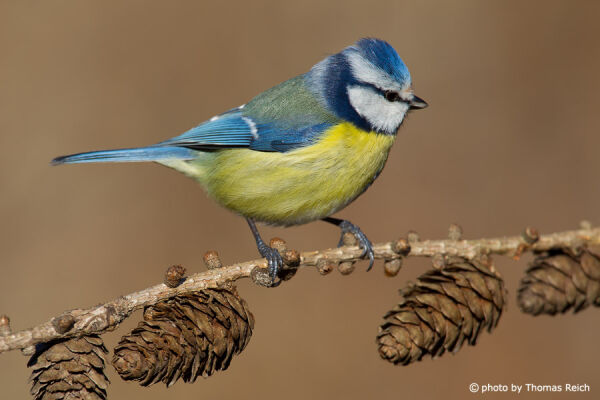 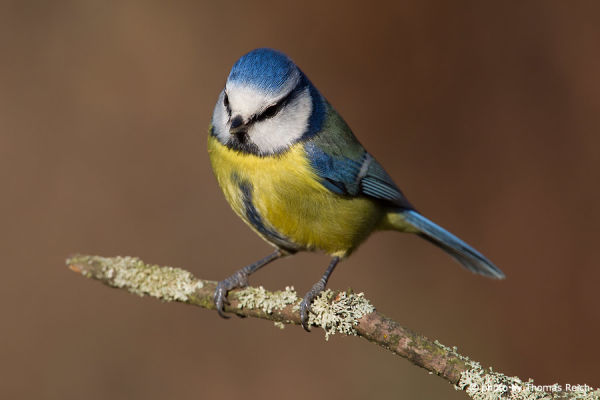 Eurasian blue and great tits form mixed winter flocks, and the former are perhaps the better gymnasts in the slender twigs. A Eurasian blue tit will often ascend a trunk in short jerky hops, imitating a treecreeper. As a rule the bird roosts in ivy or evergreens, but in harsh winters will nest wherever there is a suitable small hole, be it in a tree or nesting box. They are very agile and can hang from almost anywhere.

This is a common and popular European garden bird, due to its perky acrobatic performances when feeding on nuts or suet. It swings beneath the holder, calling "tee, tee, tee" or a scolding "churr".

Eurasian blue tits use songs and calls throughout the year. Songs are mostly used in late winter and spring to defend the territory or to attract mates. Calls are used for multiple reasons. Communication with other Eurasian blue tits is the most important motivation for the use of calls. They inform one another on their location in trees by means of contact-calls. They use alarm-calls to warn others (including birds of other species such as the great tit, the European robin or the treecreeper) about the presence of predators in the neighbourhood. Scolding, for example, is used when a ground predator (e.g. fox, cat or dog), a low flying predator or a perched owl are noticed. Sometimes this is followed by mobbing behaviour in which birds gather together in flocks to counter a predator. The alarm-whistle warns other birds about the proximity of a Eurasian sparrowhawk, a northern goshawk, a common buzzard or other flying predators that form a potential danger in the air. A series of high-pitched 'zeedling' notes are given by both partners before and during copulation. The begging-call is used by juveniles to beg for food from parents.

There are currently around 20–44 million pairs in Europe.

The Eurasian blue tit and the related hybrids are considered native species in areas of the European continent with a mainly temperate or Mediterranean climate, and in parts of the Middle East. These areas include Ireland, the United Kingdom and most of the European Union and EFTA (except Malta, where they are considered vagrant, and Iceland, where they are absent), plus: Albania, Algeria, Andorra, Armenia, Azerbaijan, Belarus, Bosnia and Herzegovina, Georgia, Iran, Iraq, Jordan, Kazakhstan, Lebanon, Libya, the Republic of Macedonia, Moldova, Montenegro, Morocco, Russia, San Marino, Serbia, Syria, Tunisia, Turkey, Vatican City and Ukraine.

In Great Britain the Eurasian blue tit is typically found in deciduous woodland, parks, gardens and even in the centre of towns.

The Eurasian blue tit is a valuable destroyer of pests, though it is fond of young buds of various trees, especially when insect prey is scarce, and may pull them to bits in the hope of finding insects. It is a well-known predator of many Lepidoptera species including the Wood Tiger moth. No species, however, destroys more coccids and aphids, the worst foes of many plants. It takes leaf miner grubs and green tortrix moths (Tortricidae). Seeds are eaten, as with all this family, and blue tits in British urban areas have evolved the ability to digest milk and cream.

The Eurasian blue tit will nest in any suitable hole in a tree, wall, or stump, or an artificial nest box, often competing with house sparrows or great tits for the site. Few birds more readily accept the shelter of a nesting box; the same hole is returned to year after year, and when one pair dies another takes possession. It is estimated by the RSPB that there are 3,535,000 breeding pairs in the UK.

During the incubation period, female blue tits perform most, if not all, of the incubation, however the male feeds the female during this time, with both female nest attendance and male feeding rate higher in the morning, declining throughout the day.

The bird is a close sitter, hissing and biting at an intruding finger. In the South West of England such behaviour has earned the Eurasian blue tit the colloquial nickname "Little Billy Biter" or "Billy Biter", originating from the UK. When protecting its eggs it raises its crest, but this is a sign of excitement rather than anger, for it is also elevated during nuptial display. The nesting material is usually moss, wool, hair and feathers, and the eggs are laid in April or May. The number in the clutch is often very large, but seven or eight are normal, and bigger clutches are usually laid by two or even more hens. It is not unusual for a single bird to feed the chicks in the nest at a rate of one feed every 90 seconds during the height of the breeding season. In winter they form flocks with other tit species.

In an analysis carried out using ring-recovery data in Britain, the survival rate for juveniles in their first year was 38%, while the adult annual survival rate was 53%. From these figures the typical lifespan is only three years. Within Britain, the maximum recorded age is 10 years and 3 months for a bird that was ringed in Bedfordshire. The maximum recorded age overall is 11 years and 7 months for a bird in the Czech Republic.

This text is based on the article Eurasian blue tit from the free encyclopedia Wikipedia and is licensed under the Creative Commons CC-BY-SA 3.0 Unported (short version). A list of the authors is available on Wikipedia.