Stock Photos
The northern pike (Esox lucius) is a species of carnivorous fish of the genus Esox (the pikes). They are typical of brackish and fresh waters of the Northern Hemisphere (i.e. holarctic in distribution). They are known simply as a pike in Britain, Ireland, and most of Eastern Europe, Canada and the United States.

Northern pike are most often olive green, shading from yellow to white along the belly. The flank is marked with short, light bar-like spots and a few to many dark spots on the fins. Sometimes, the fins are reddish. Younger pike have yellow stripes along a green body; later, the stripes divide into light spots and the body turns from green to olive green. The lower half of the gill cover lacks scales, and it has large sensory pores on its head and on the underside of its lower jaw which are part of the lateral line system. Unlike the similar-looking and closely related muskellunge, the northern pike has light markings on a dark body background and fewer than six sensory pores on the underside of each side of the lower jaw. 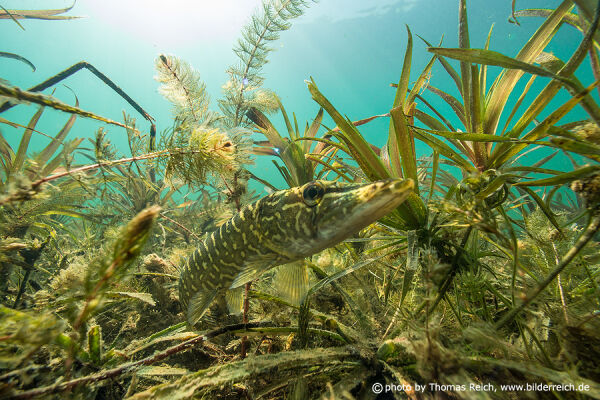 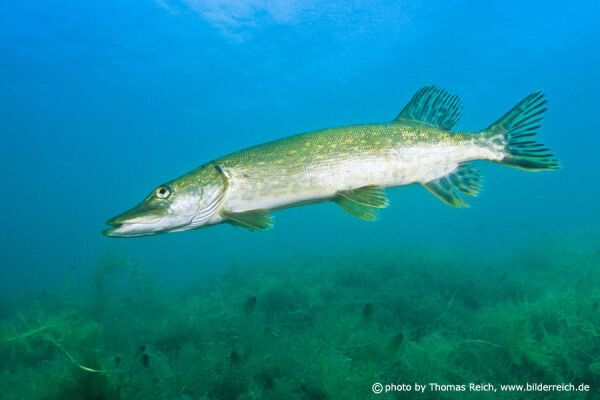 A hybrid between northern pike and muskellunge is known as a tiger muskellunge (Esox masquinongy × lucius or Esox lucius × masquinongy, depending on the sex of each of the contributing species). In the hybrids, the males are invariably sterile, while females are often fertile, and may back-cross with the parent species. Another form of northern pike, the silver pike, is not a subspecies but rather a mutation that occurs in scattered populations. Silver pike, sometimes called silver muskellunge, lack the rows of spots and appear silver, white, or silvery-blue in color.When ill, silver pike have been known to display a somewhat purplish hue; long illness is also the most common cause of male sterility.

In Italy, the newly identified species Esox cisalpinus ("southern pike") was long thought to be a color variation of the northern pike, but was in 2011 announced to be a species of its own.

Pike are found in sluggish streams and shallow, weedy places in lakes and reservoirs, as well as in cold, clear, rocky waters. They are typical ambush predators; they lie in wait for prey, holding perfectly still for long periods, and then exhibit remarkable acceleration as they strike. They inhabit any water body that contains fish, but suitable places for spawning are also essential. Because of their cannibalistic nature, young pike need places where they can take shelter between plants so they are not eaten. In both cases, rich submerged vegetation is needed. Pike are seldom found in brackish water, except for the Baltic Sea area, here they can be found spending time both in the mouths of rivers and in the open brackish waters of the Baltic Sea. It is normal for pike to return to fresh water after a period in these brackish waters. They seem to prefer water with less turbidity, but that is likely related to their dependence on the presence of vegetation.

The young, free-swimming pike feed on small invertebrates starting with daphnia, and quickly move on to bigger prey, such as the isopods asellus or gammarus. When the body length is 4 to 8 cm (1.6 to 3.1 in), they start feeding on small fish.

A pike has a very typical hunting behaviour; it is able to remain stationary in the water by moving the last fin rays of the dorsal fins and the pectoral fins. Before striking, it bends its body and darts out to the prey using the large surface of its caudal fin, dorsal fin, and anal fin to propel itself. The fish has a distinctive habit of catching its prey sideways in the mouth, immobilising it with its sharp, backward-pointing teeth, and then turning the prey headfirst to swallow it. For larger prey, the pike will usually attempt to drown the prey before carrying it off to be consumed. It eats mainly fish and frogs, but also small mammals and birds fall prey to pike. Young pike have been found dead from choking on a pike of a similar size, an observation referred to by the renowned English poet Ted Hughes in his famous poem "Pike". Northern pike also feed on insects, crayfish, and leeches. They are not very particular and eat spiny fish like perch, and will even take fish as small as sticklebacks if they are the only available prey.

Pike have been observed hunting and attempting to eat larger waterbirds, such as an incident in 2016 when an individual was observed trying to drown and eat a great crested grebe, as well as an incident the previous year where an attack by a large pike between three and four feet long was implicated as a possible cause for the injury and death of an adult mute swan on Lower Lough Erne, Northern Ireland, but it is generally believed that such attacks are only rare occurrences.

The northern pike is a largely solitary predator. It migrates during a spawning season, and it follows prey fish like common roaches to their deeper winter quarters. Sometimes, divers observe groups of similar-sized pike that cooperate some to start hunting at the same time, so "wolfpack" theories are given. Large pike can be caught on dead immobile fish, so these pike are thought to move about in a rather large territory to find food. Large pike are also known to cruise large water bodies at a few metres deep, probably pursuing schools of prey fish. Smaller pike are more of ambush predators, probably because of their vulnerability to cannibalism. Pike are often found near the exit of culverts, which can be attributed to the presence of schools of prey fish and the opportunity for ambush. Being potamodromous, all esocids tend to display limited migration, although some local movement may be of key significance for population dynamics. In the Baltic, they are known to follow herring schools, so have some seasonal migration.

Pike have a strong homing behaviour; they inhabit certain areas by nature. During the summer, they tend to group closer to vegetation than during the winter.The exact reason is not clear, but likely is a result of foraging or possibly reproductive needs to safeguard young. Pike diel rhythm changes significantly over the year. On sunny days, pike stay closer to the shallow shore. On windy days, they are further from shore. When close to the shore, pike have a preference for shallow, vegetated areas. Pike are more stationary in reservoirs than lakes. A possibility is that lakes have more prey to feed upon, or possibly in reservoirs prey will ultimately cross paths with the pike. As such, this could be a form of energy conservation. Pike breed in the spring.

Pike are physically capable of breeding at an age of about two years, spawning in spring when the water temperature first reaches about 9 °C (48 °F). They have a tendency to lay a large number of eggs. A likely explanation for such actions are to produce as many surviving offspring as possible, as many most likely die early in life. In females, the gonads enlarge when it is time to shed her eggs. However, after they are shed, these eggs will not hatch if the water is below 6 °C (43 °F). Male pike arrive to the breeding grounds before females do, preceding them by a few weeks. In addition, the males stay after the spawning is finished. Parental stock is vital for pike success. Egg survival has been shown to be positively correlated with number of eggs laid. For breeding, the more stable the water, the greater the fitness of the pike. Mortality results from toxic concentrations of iron or rapid temperature changes, and adult abundance and the strength of the resulting year classes are not related. It is based upon two points of development: one during embryo stage between fertilization and closure of the blastopore, and the second between hatching and the termination of the alevin stage.

This text is based on the article Northern pike from the free encyclopedia Wikipedia and is licensed under the Creative Commons CC-BY-SA 3.0 Unported (short version). A list of the authors is available on Wikipedia.