Stock Photos
The European robin (Erithacus rubecula), known simply as the robin or robin redbreast in the British Isles, is a small insectivorous passerine bird that belongs to the chat subfamily of the Old World flycatcher family. About 12.5–14.0 cm (5.0–5.5 inches) in length, the male and female are similar in colouration, with an orange breast and face lined with grey, brown upper-parts and a whitish belly. It is found across Europe, east to Western Siberia and south to North Africa; it is sedentary in most of its range except the far north.

The term robin is also applied to some birds in other families with red or orange breasts. These include the American robin (Turdus migratorius), a thrush, and the Australasian robins of the family Petroicidae, the relationships of which are unclear.

The adult European robin is 12.5–14.0 cm (5.0–5.5 in) long and weighs 16–22 g (9/16–13/16 oz), with a wingspan of 20–22 cm (8–9 in). The male and female bear similar plumage; an orange breast and face (more strongly coloured in the otherwise similar British subspecies E. r. melophilus), lined by a bluish grey on the sides of the neck and chest. The upperparts are brownish, or olive-tinged in British birds, and the belly whitish, while the legs and feet are brown. The bill and eyes are black. Juveniles are a spotted brown and white in colouration, with patches of orange gradually appearing. 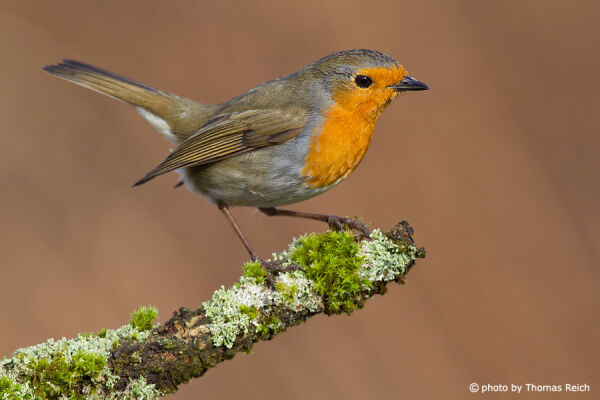 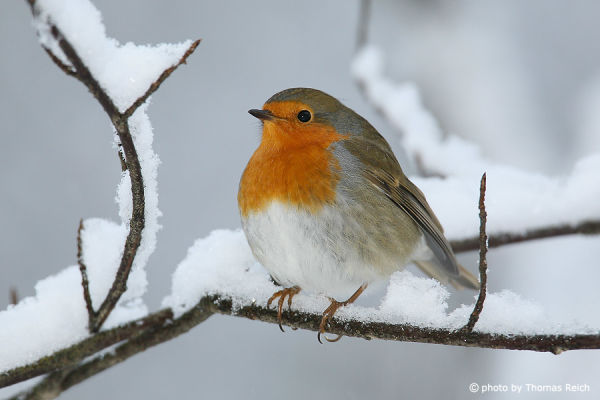 Male robins are noted for their highly aggressive territorial behaviour. They will fiercely attack other males and competitors that stray into their territories and have been observed attacking other small birds without apparent provocation. There are instances of robins attacking their own reflection. Territorial disputes sometimes lead to fatalities, accounting for up to 10% of adult robin deaths in some areas.

Because of high mortality in the first year of life, a robin has an average life expectancy of 1.1 years; however, once past its first year it can expect to live longer and one robin has been recorded as reaching 19 years of age. A spell of very low temperatures in winter may also result in significant mortality. This species is parasitised by the moorhen flea (Dasypsyllus gallinulae)[34] and the acanthocephalan Apororhynchus silesiacus.

The robin produces a fluting, warbling About this sound during the breeding season. Both the male and female sing during the winter, when they hold separate territories, the song then sounding more plaintive than the summer version. The female robin moves a short distance from the summer nesting territory to a nearby area that is more suitable for winter feeding. The male robin keeps the same territory throughout the year. During the breeding season, male robins usually initiate their morning song an hour before civil sunrise, and usually terminate their daily singing around thirty minutes after sunset. Nocturnal singing can also occur, especially in urban areas that are artificially lit during the night. Under artificial light, nocturnal singing can be used by urban robins to actively shunt daytime anthropogenic noise. A variety of calls is also made at any time of year, including a ticking note indicating anxiety or mild alarm.

The robin occurs in Eurasia east to Western Siberia, south to Algeria and on the Atlantic islands as far west as the Azores and Madeira. It is a vagrant in Iceland. In the southeast, it reaches the Caucasus range. Irish and British robins are largely resident but a small minority, usually female, migrate to southern Europe during winter, a few as far as Spain. Scandinavian and Russian robins migrate to Britain and western Europe to escape the harsher winters. These migrants can be recognised by the greyer tone of the upper parts of their bodies and duller orange breast. The European robin prefers spruce woods in northern Europe, contrasting with its preference for parks and gardens in Ireland and Great Britain.

In southern Iberia, habitat segregation of resident and migrant robins occurs, with resident robins remaining in the same woodlands where they bred.

Attempts to introduce the European robin into Australia and New Zealand in the latter part of the 19th century were unsuccessful. Birds were released around Melbourne, Auckland, Christchurch, Wellington and Dunedin by various local acclimatisation societies, with none becoming established. There was a similar outcome in North America, as birds failed to become established after being released in Long Island, New York in 1852, Oregon in 1889–1892, and the Saanich Peninsula in British Columbia in 1908–1910.

The robin is diurnal, although it has been reported to be active hunting insects on moonlit nights or near artificial light at night. Well known to British and Irish gardeners, it is relatively unafraid of people and drawn to human activities involving the digging of soil, in order to look out for earthworms and other food freshly turned up. Indeed, the robin is considered to be a gardener's friend and for various folklore reasons the robin would never be harmed. In continental Europe on the other hand, robins were hunted and killed as with most other small birds, and are more wary. Robins also approach large wild animals, such as wild boar and other animals which disturb the ground, to look for any food that might be brought to the surface. In autumn and winter, robins will supplement their usual diet of terrestrial invertebrates, such as spiders, worms and insects, with berries and fruit. They will also eat seed mixtures placed on bird-tables. 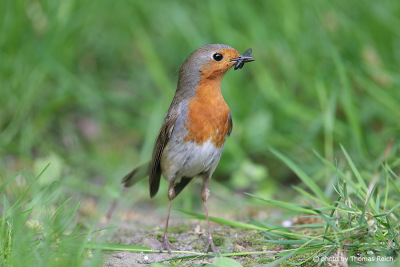 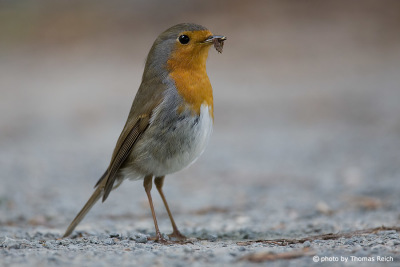 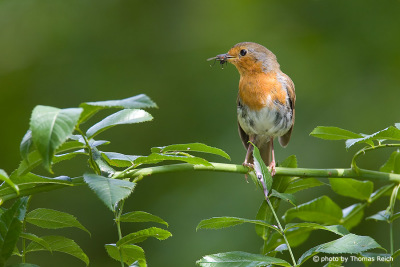 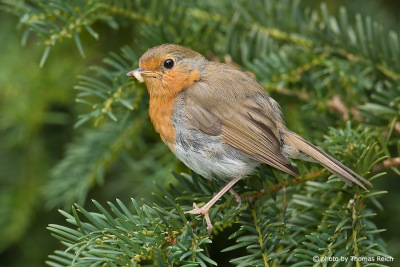 Robins may choose a wide variety of sites for building a nest. In fact, anything which can offer some shelter, like a depression or hole may be considered. As well as the usual crevices, or sheltered banks, other objects include pieces of machinery, barbecues, bicycle handlebars, bristles on upturned brooms, discarded kettles, watering cans, flower pots and even hats. The nest is composed of moss, leaves and grass, with fine grass, hair and feathers for lining. Two or three clutches of five or six eggs are laid throughout the breeding season, which commences in March in Britain and Ireland. The eggs are a cream, buff or white speckled or blotched with reddish-brown colour, often more heavily so at the larger end.

When juvenile birds fly from the nests they are mottled brown in colour all over. After two to three months out of the nest, the juvenile bird grows some orange feathers under its chin and over a similar period this patch gradually extends to complete the adult appearance. 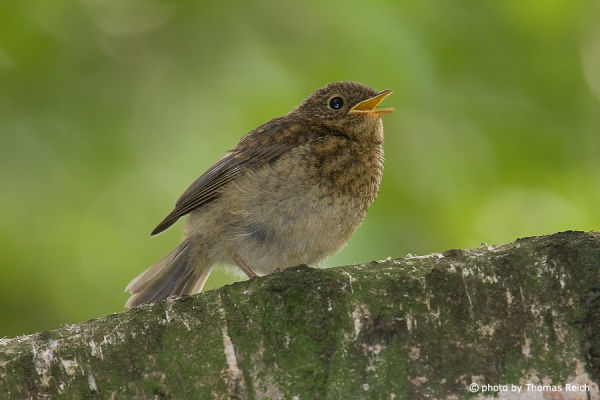 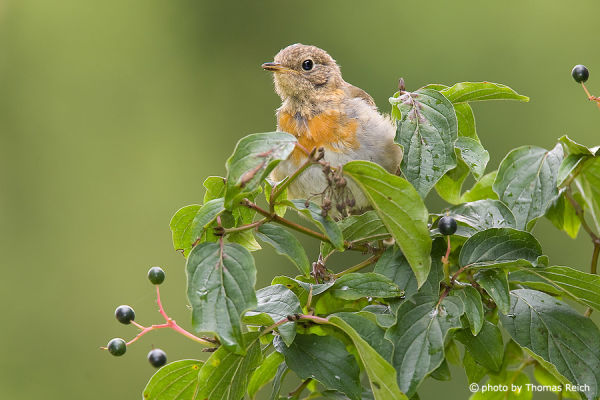 This text is based on the article European robin from the free encyclopedia Wikipedia and is licensed under the Creative Commons CC-BY-SA 3.0 Unported (short version). A list of the authors is available on Wikipedia.