Stock Photos
Cocos Island (Spanish: Isla del Coco) is an island in the Pacific Ocean administered by Costa Rica, approximately 550 km (342 mi; 297 nmi) southwest of the Costa Rican mainland. It constitutes the 11th of the 13 districts of Puntarenas Canton of the Province of Puntarenas. With an area of approximately 23.85 km2 (9.21 sq mi), the island is more or less rectangular in shape. It is the southernmost point on the North American continent if outer islands are included. 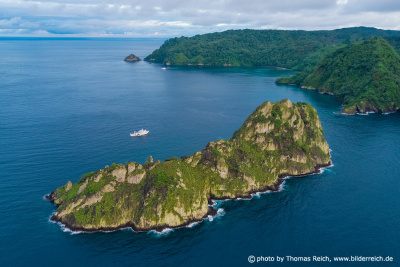 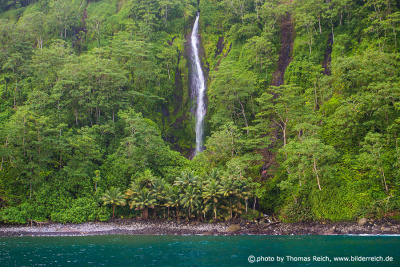 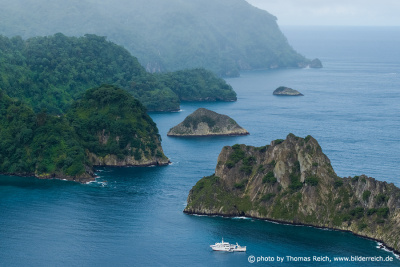 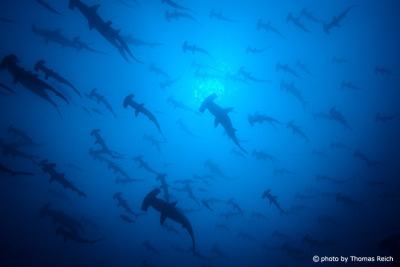 The entirety of Cocos Island has been designated a Costa Rican National Park since 1978, and has no permanent inhabitants other than Costa Rican park rangers. Surrounded by deep waters with counter-currents, Cocos Island is admired by scuba divers for its populations of hammerhead sharks, rays, dolphins and other large marine species. The wet climate and oceanic qualities give Cocos an ecological character that is not shared with either the Galápagos Archipelago or any of the other islands (for example, Malpelo, Gorgona or Coiba) in the eastern Pacific Ocean.

Cocos Island is an oceanic island of both volcanic and tectonic origin. It is the only emergent island of the Cocos Plate, one of the minor tectonic plates. Potassium-argon dating established the age of the oldest rocks between 1.91 and 2.44 million years (Late Pliocene) and it is composed primarily of basalt, which is formed by cooling lava.

The island is approximately rectangular in shape, measuring about 8 km × 3 km (5 mi × 2 mi) with a perimeter of around 23.3 km (14.5 mi). The landscape is mountainous and irregular; the highest point is Cerro Iglesias, at 575.5 m (1,888 ft). In spite of its mountainous character, there are flatter areas between 200–260 m (660–850 ft) in elevation in the center of the island, which are said to be a transitional stage of the geomorphological cycle of V-shaped valleys.

Cocos Island has a number of short rivers and streams that drain abundant rainfall into four bays, three of them on the north side (Wafer, Chatham and Weston). The largest rivers are the Genio and the Pittier, which drain their water into Wafer Bay. Sheer, 90-metre (300 ft) cliffs ring much of the island, preventing convenient access except at a few beaches; the easiest point of entry is at Chatham Bay. The mountainous landscape and the tropical climate combine to create over 200 waterfalls throughout the island. The island’s soils are classified as entisols, which are highly acidic and would be easily eroded by the island’s high rainfall on the steep slopes were it not for the dense forest coverage.

This text is based on the article Cocos Island from the free encyclopedia Wikipedia and is licensed under the Creative Commons CC-BY-SA 3.0 Unported (short version). A list of the authors is available on Wikipedia.