Stock Photos
The Sandwich tern (Thalasseus sandvicensis) is a tern in the family Laridae. It is very closely related to the lesser crested tern (T. bengalensis), Chinese crested tern (T. bernsteini), Cabot's tern (T. acuflavidus), and elegant tern (T. elegans) and has been known to interbreed with the lesser crested. It breeds in the Palearctic from Europe to the Caspian Sea wintering to S Africa, India and Sri Lanka

The Sandwich tern is a medium-large tern with grey upperparts, white underparts, a yellow-tipped black bill and a shaggy black crest which becomes less extensive in winter with a white crown. Young birds bear grey and brown scalloped plumage on their backs and wings. It is a vocal bird. It nests in a ground scrape and lays one to three eggs.

Like all Thalasseus terns, the Sandwich tern feeds by plunge diving for fish, usually in marine environments, and the offering of fish by the male to the female is part of the courtship display.

The Sandwich tern's thin sharp bill is black with a yellow tip, except in the yellow or orange billed South American race. Its short legs are black. Its upperwings are pale grey and its underparts white, and this tern looks very pale in flight, although the primary flight feathers darken during the summer. 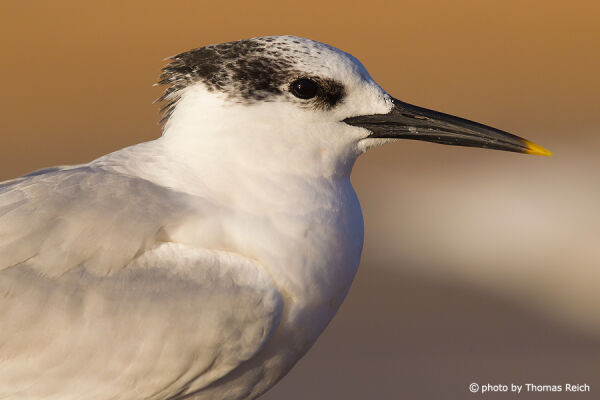 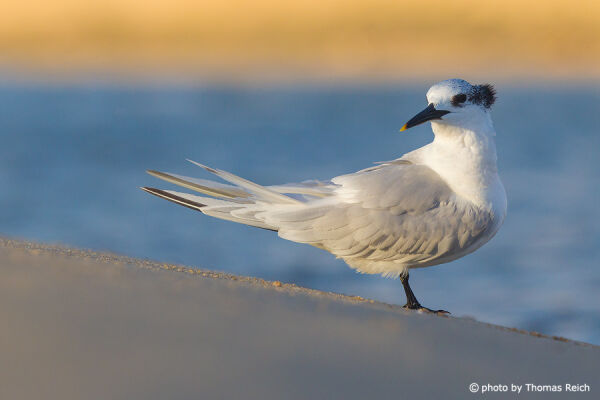 The Sandwich tern is a vocal bird; its call is a characteristic loud grating kear-ik or kerr ink.

This species breeds in very dense colonies on coasts and islands, and exceptionally inland on suitable large freshwater lakes close to the coast.
The lesser crested tern and elegant tern differ in having all-orange bills; lesser crested also differs in having a grey rump and marginally stouter bill, and elegant in having a slightly longer, slenderer bill. Chinese crested tern is the most similar to Sandwich, but has a reversal of the bill colour, yellow with a black tip; it does not overlap in range with Sandwich tern so confusion is unlikely.

In winter, the adult Sandwich tern's forehead becomes white. Juvenile Sandwich terns have dark tips to their tails, and a scaly appearance on their back and wings, like juvenile roseate terns.

Like all Thalasseus terns, the Sandwich tern feeds by plunge-diving for fish, almost invariably from the sea. It usually dives directly, and not from the "stepped-hover" favoured by Arctic terns.

The offering of fish by the male to the female is part of the courtship display. It nests in a ground scrape and lays one to three eggs. Unlike some of the smaller white terns, it is not very aggressive toward potential predators, relying on the sheer density of the nests—often only 20–30 cm (7.9–11.8 in) apart and nesting close to other more aggressive species such as Arctic terns and black-headed gulls to avoid predation.

This text is based on the article Sandwich Tern from the free encyclopedia Wikipedia and is licensed under the Creative Commons CC-BY-SA 3.0 Unported (short version). A list of the authors is available on Wikipedia.