Stock Photos
The wood sandpiper (Tringa glareola) is a small wader. This Eurasian species is the smallest of the shanks, which are mid-sized long-legged waders of the family Scolopacidae. The genus name Tringa is the New Latin name given to the green sandpiper by Aldrovandus in 1599 based on Ancient Greek trungas, a thrush-sized, white-rumped, tail-bobbing wading bird mentioned by Aristotle. The specific glareola is from Latin glarea, " gravel".

However, it is not very closely related to these two species. Rather, its closest relative is the common redshank (T. totanus), and these two share a sister relationship with the marsh sandpiper (T. stagnatilis). These three species are a group of smallish shanks with red or yellowish legs, a breeding plumage that is generally subdued light brown above with some darker mottling and with a pattern of somewhat diffuse small brownish spots on the breast and neck. 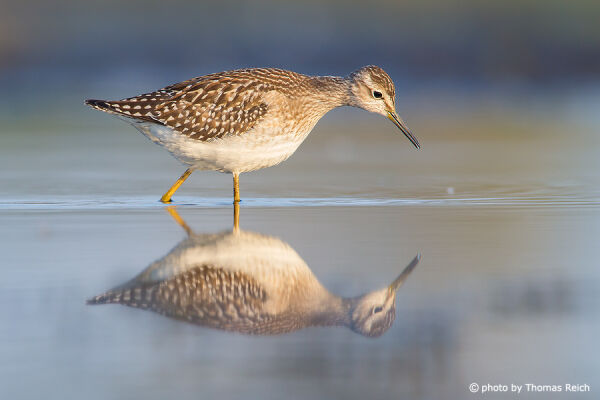 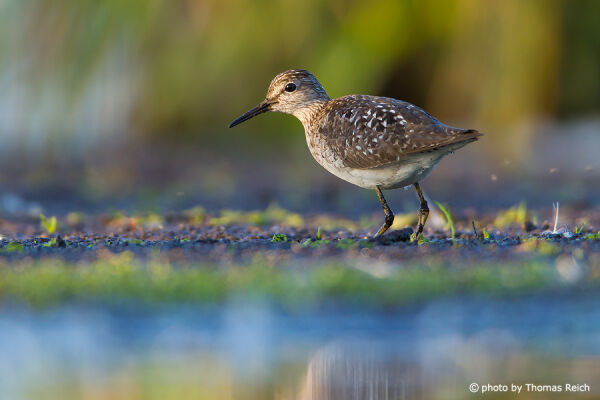 This bird is usually found on freshwater during migration and wintering. They forage by probing in shallow water or on wet mud. The wood sandpiper breeds in subarctic wetlands from the Scottish Highlands across Europe and then east across the Palearctic. They migrate to Africa, Southern Asia, particularly India, and Australia. Vagrant birds have been seen as far into the Pacific as the Hawaiian Islands. In Micronesia it is a regular visitor to the Mariana Islands (where flocks of up to 32 birds are reported) and Palau; it is recorded on Kwajalein in the Marshall Islands about once per decade. This species is encountered in the western Pacific region between mid-October and mid-May. A slight westward expansion saw the establishment of a small but permanent breeding population in Scotland since the 1950s.

T. glareola nests on the ground or uses an abandoned old tree nest of another bird, such as the fieldfare (Turdus pilaris). Four pale green eggs are laid between March and May.

Adult wood sandpipers moult all their primary feathers between August and December, whilst immature birds moult varying number of outer primaries between December and April, much closer to their departure from Africa. Immatures are also much more flexible than adults in the timing and rate of their moult and refueling. Adults and immatures which accumulate fuel loads of c.50% of their lean body mass can potentially cross distances of 2397–4490 km in one non-stop flight.

This text is based on the article Wood sandpiper from the free encyclopedia Wikipedia and is licensed under the Creative Commons CC-BY-SA 3.0 Unported (short version). A list of the authors is available on Wikipedia.