Stock Photos
The grey plover or black-bellied plover (Pluvialis squatarola) is a medium-sized plover breeding in Arctic regions. It is a long-distance migrant, with a nearly worldwide coastal distribution when not breeding.

The grey plover is 27–30 cm (11–12 in) long with a wingspan of 71–83 cm (28–33 in) and a weight of 190–280 g (6.7–9.9 oz) (up to 345 g (12.2 oz) in preparation for migration). In spring and summer (late April or May to August), adults are spotted black and white on the back and wings. The face and neck are black with a white border; they have a black breast and belly and a white rump. The tail is white with black barring. The bill and legs are black. They moult to winter plumage in mid August to early September and retain this until April; this being a fairly plain grey above, with a grey-speckled breast and white belly. 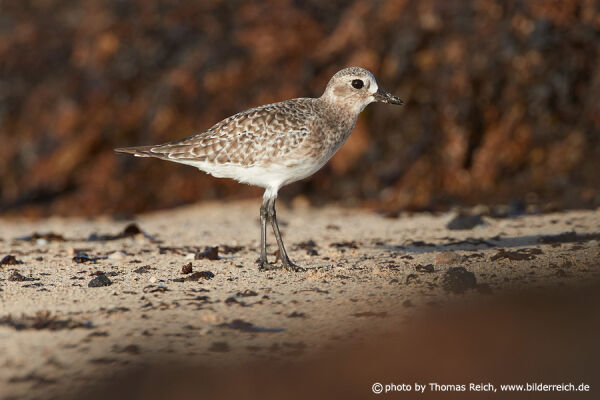 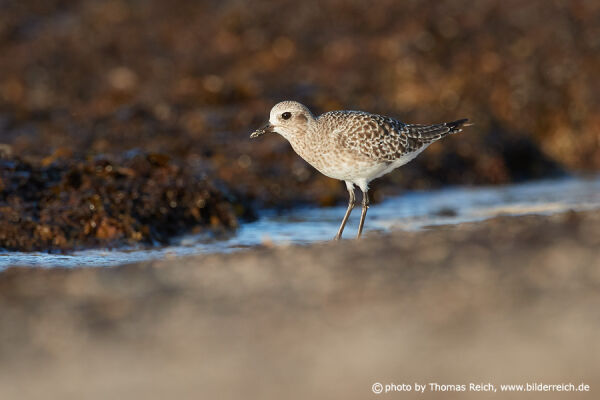 The juvenile and first-winter plumages, held by young birds from fledging until about one year old, are similar to the adult winter plumage but with the back feathers blacker with creamy white edging. In all plumages, the inner flanks and axillary feathers at the base of the underwing are black, a feature which readily distinguishes it from the other three Pluvialis species in flight. On the ground, it can also be told from the other Pluvialis species by its larger (24–34 mm, 0.94–1.34 in), heavier bill.

A nearly worldwide coastal distribution when not breeding.

They forage for food on beaches and tidal flats, usually by sight. The food consists of small molluscs, polychaete worms, crustaceans, and insects. It is less gregarious than the other Pluvialis species, not forming dense feeding flocks, instead feeding widely dispersed over beaches, with birds well spaced apart. They will however form dense flocks on high tide roosts.

Their breeding habitat is Arctic islands and coastal areas across the northern coasts of Alaska, Canada, and Russia. They nest on the ground in a dry open tundra with good visibility; the nest is a shallow gravel scrape. Four eggs (sometimes only three) are laid in early June, with an incubation period of 26–27 days; the chicks fledge when 35–45 days old.

Young birds do not breed until two years old; they typically remain on the wintering grounds until their second summer.

This text is based on the article Grey plover from the free encyclopedia Wikipedia and is licensed under the Creative Commons CC-BY-SA 3.0 Unported (short version). A list of the authors is available on Wikipedia.