Stock Photos
A rainbow is a meteorological phenomenon that is caused by reflection, refraction and dispersion of light in water droplets resulting in a spectrum of light appearing in the sky. It takes the form of a multicoloured circular arc. Rainbows caused by sunlight always appear in the section of sky directly opposite the sun.

Rainbows can be full circles. However, the observer normally sees only an arc formed by illuminated droplets above the ground, and centered on a line from the sun to the observer's eye.

In a primary rainbow, the arc shows red on the outer part and violet on the inner side. This rainbow is caused by light being refracted when entering a droplet of water, then reflected inside on the back of the droplet and refracted again when leaving it.

In a double rainbow, a second arc is seen outside the primary arc, and has the order of its colours reversed, with red on the inner side of the arc. This is caused by the light being reflected twice on the inside of the droplet before leaving it. 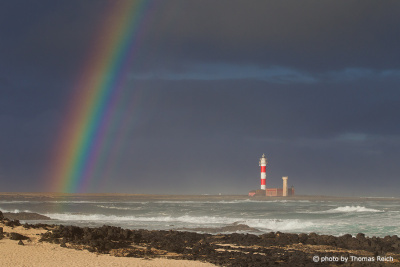 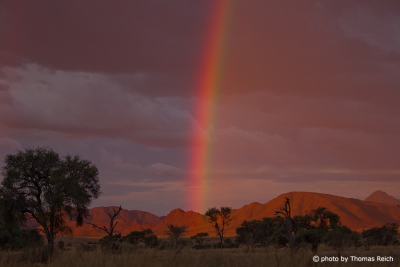 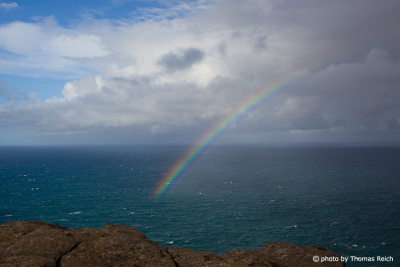 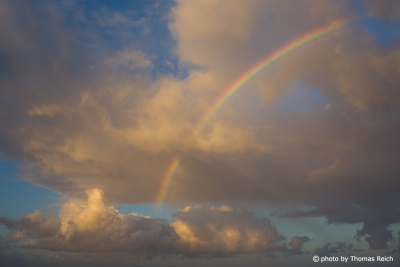 A rainbow is not located at a specific distance from the observer, but comes from an optical illusion caused by any water droplets viewed from a certain angle relative to a light source. Thus, a rainbow is not an object and cannot be physically approached. Indeed, it is impossible for an observer to see a rainbow from water droplets at any angle other than the customary one of 42 degrees from the direction opposite the light source. Even if an observer sees another observer who seems "under" or "at the end of" a rainbow, the second observer will see a different rainbow—farther off—at the same angle as seen by the first observer.

Rainbows span a continuous spectrum of colours. Any distinct bands perceived are an artefact of human colour vision, and no banding of any type is seen in a black-and-white photo of a rainbow, only a smooth gradation of intensity to a maximum, then fading towards the other side. For colours seen by the human eye, the most commonly cited and remembered sequence is Newton's sevenfold red, orange, yellow, green, blue, indigo and violet, remembered by the mnemonic Richard Of York Gave Battle In Vain (ROYGBIV).

Rainbows can be caused by many forms of airborne water. These include not only rain, but also mist, spray, and airborne dew.
Rainbows can be observed whenever there are water drops in the air and sunlight shining from behind the observer at a low altitude angle. Because of this, rainbows are usually seen in the western sky during the morning and in the eastern sky during the early evening. The most spectacular rainbow displays happen when half the sky is still dark with raining clouds and the observer is at a spot with clear sky in the direction of the sun. The result is a luminous rainbow that contrasts with the darkened background. During such good visibility conditions, the larger but fainter secondary rainbow is often visible. It appears about 10° outside of the primary rainbow, with inverse order of colours.

The rainbow effect is also commonly seen near waterfalls or fountains. In addition, the effect can be artificially created by dispersing water droplets into the air during a sunny day. Rarely, a moonbow, lunar rainbow or nighttime rainbow, can be seen on strongly moonlit nights. As human visual perception for colour is poor in low light, moonbows are often perceived to be white.

It is difficult to photograph the complete semicircle of a rainbow in one frame, as this would require an angle of view of 84°. For a 35 mm camera, a wide-angle lens with a focal length of 19 mm or less would be required. Now that software for stitching several images into a panorama is available, images of the entire arc and even secondary arcs can be created fairly easily from a series of overlapping frames.

From above the earth such as in an aeroplane, it is sometimes possible to see a rainbow as a full circle. This phenomenon can be confused with the glory phenomenon, but a glory is usually much smaller, covering only 5–20°.

The sky inside a primary rainbow is brighter than the sky outside of the bow. This is because each raindrop is a sphere and it scatters light over an entire circular disc in the sky. The radius of the disc depends on the wavelength of light, with red light being scattered over a larger angle than blue light. Over most of the disc, scattered light at all wavelengths overlaps, resulting in white light which brightens the sky. At the edge, the wavelength dependence of the scattering gives rise to the rainbow.

Light of primary rainbow arc is 96% polarised tangential to the arch. Light of second arc is 90% polarised.

This text is based on the article Rainbow from the free encyclopedia Wikipedia and is licensed under the Creative Commons CC-BY-SA 3.0 Unported (short version). A list of the authors is available on Wikipedia.