Stock Photos
Fog is a visible aerosol consisting of tiny water droplets or ice crystals suspended in the air at or near the Earth's surface. Fog can be considered a type of low-lying cloud usually resembling stratus, and is heavily influenced by nearby bodies of water, topography, and wind conditions. In turn, fog has affected many human activities, such as shipping, travel, and warfare.

The term "fog" is typically distinguished from the more generic term "cloud" in that fog is low-lying, and the moisture in the fog is often generated locally (such as from a nearby body of water, like a lake or the ocean, or from nearby moist ground or marshes).

For aviation purposes in the UK, a visibility of less than 5 kilometres (3.1 mi) but greater than 999 metres (3,278 ft) which is considered to be mist if the relative humidity is 95% or greater; below 95%, haze is reported. 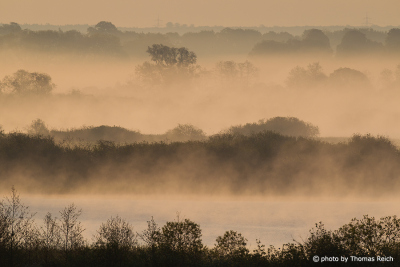 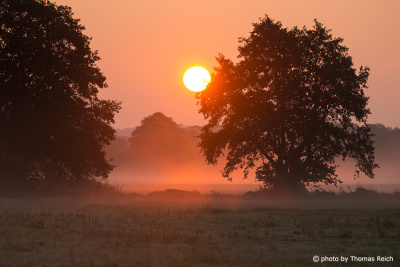 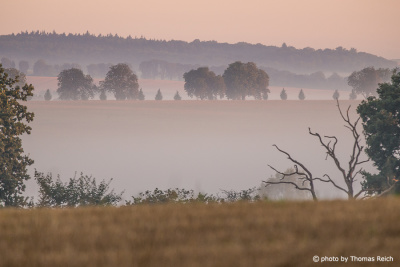 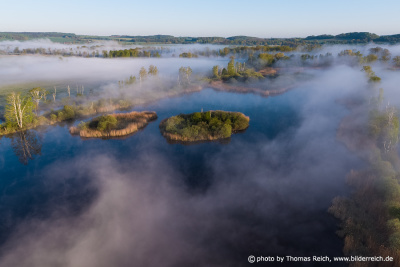 Fog forms when the difference between air temperature and dew point is less than 2.5 °C (4.5 °F).

Fog begins to form when water vapor condenses into tiny water droplets that are suspended in the air. Some examples of ways that water vapor is added to the air are by wind convergence into areas of upward motion; precipitation or virga falling from above; daytime heating evaporating water from the surface of oceans, water bodies, or wet land; transpiration from plants; cool or dry air moving over warmer water; and lifting air over mountains. Water vapor normally begins to condense on condensation nuclei such as dust, ice, and salt in order to form clouds. Fog, like its elevated cousin stratus, is a stable cloud deck which tends to form when a cool, stable air mass is trapped underneath a warm air mass.

Fog commonly produces precipitation in the form of drizzle or very light snow. Drizzle occurs when the humidity of fog attains 100% and the minute cloud droplets begin to coalesce into larger droplets. This can occur when the fog layer is lifted and cooled sufficiently, or when it is forcibly compressed from above by descending air. Drizzle becomes freezing drizzle when the temperature at the surface drops below the freezing point.

The thickness of a fog layer is largely determined by the altitude of the inversion boundary, which in coastal or oceanic locales is also the top of the marine layer, above which the air mass is warmer and drier. The inversion boundary varies its altitude primarily in response to the weight of the air above it, which is measured in terms of atmospheric pressure. The marine layer, and any fog-bank it may contain, will be "squashed" when the pressure is high, and conversely, may expand upwards when the pressure above it is lowering.

This text is based on the article Fog from the free encyclopedia Wikipedia and is licensed under the Creative Commons CC-BY-SA 3.0 Unported (short version). A list of the authors is available on Wikipedia.