Stock Photos
The African bush elephant (Loxodonta africana), also known as the African savanna elephant, is the largest living terrestrial animal with bulls reaching a shoulder height of up to 3.96 m (13.0 ft). Both sexes have tusks, which erupt when they are 1–3 years old and grow throughout life.

It is distributed across 37 African countries and inhabits forests, grasslands and woodlands, wetlands and agricultural land. Since 2004, it has been listed as Vulnerable on the IUCN Red List. It is threatened foremost by habitat destruction, and in parts of its range also by poaching for meat and ivory. It is a social mammal, traveling in herds composed of cows and their offspring. Adult bulls usually live alone or in small bachelor groups. It is a herbivore, feeding on grasses, creepers, herbs, leaves and bark.

The African bush elephant has grey skin with scanty hairs. Its large ears cover the whole shoulder. They can grow as large as 2 m × 1.5 m (6.6 ft × 4.9 ft). Large ears help to reduce body heat; flapping them creates air currents and exposes the ears' inner sides where large blood vessels increase heat loss during hot weather. The African bush elephant's ears are pointed and triangular shaped. Its occipital plane slopes forward. Its back is shaped markedly concave. Its sturdy tusks are curved out and point forward. 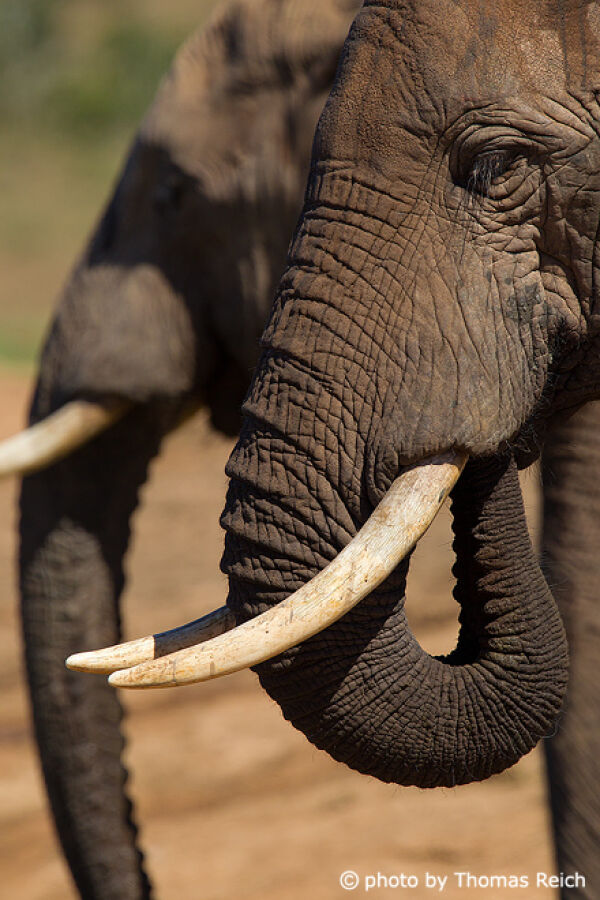 The trunk is a prehensile elongation of its upper lip and nose. Short tactile hair grows on the trunk, which has two finger-like processes on the tip. This highly sensitive organ is innervated primarily by the trigeminal nerve, and thought to be manipulated by about 40–60,000 muscles. Because of this muscular structure, the trunk is so strong that elephants can use it for lifting about 3% of their own body weight. They use it for smelling, touching, feeding, drinking, dusting, producing sounds, loading, defending and attacking. Functional loss of the trunk due to flaccid trunk paralysis sometimes makes the elephant carry the trunk over the tusk and walk into deep water in order to drink.

The tusks grow from deciduous teeth known as tushes that develop in the upper jaw and consist of a crown, root and pulpal cavity, which are completely formed soon after birth. Tushes reach a length of 5 cm (2 in). The tusks erupt when elephants are 1–3 years old and grow throughout life. They are composed of dentin and coated with a thin layer of cementum. Their tips bear a conical layer of enamel that is usually worn off when the elephant is five years old. Tusks of bulls grow faster than tusks of females. Mean weight of tusks at the age of 60 years is 109 kg (240 lb) in bulls, and 17.7 kg (39.0 lb) in cows.The longest known tusk of an African bush elephant measured 3.51 m (11.5 ft) and weighed 117 kg (258 lb).

The African bush elephant occurs in Sub-Saharan Africa including Uganda, Kenya, Tanzania, Botswana, Zimbabwe, Namibia, Zambia, and Angola. It moves between a variety of habitats, including subtropical and temperate forests, dry and seasonally flooded grasslands and woodlands, wetlands and agricultural land from sea level to mountain slopes. In Mali and Namibia, it also inhabits desert areas.

In Ethiopia, the African bush elephant has historically been recorded up to an altitude of 2,500 m (8,200 ft). By the late 1970s, the population had declined to a herd in the Dawa River valley and one close to the Kenyan border.

The African bush elephant is herbivorous. Its diet consists mainly of grasses, creepers and herbs. Adults can consume up to 150 kg (330 lb) per day. During the dry season, the diet also includes leaves and bark. Tree bark in particular contains a high level of calcium. Elephants in Babille Elephant Sanctuary consume leaves and fruit of cherimoya, papaya, banana, guava and leaves, stems and seeds of maize, sorghum and sugarcane. To supplement their diet with minerals, they congregate at mineral-rich water-holes, termite mounds and mineral licks. Salt licks visited by elephants in the Kalahari contain high concentrations of water-soluble sodium. Elephants drink 180–230 l (40–50 imp gal; 50–60 U.S. gal) of water daily, and seem to prefer sites where water and soil contains sodium. In Kruger National Park and on the shore of Lake Kariba, elephants were observed to ingest wood ash, which also contains sodium.

Spermatogenesis starts when bulls are about 15 years old. Females ovulate for the first time at the age of 11 years. They are in estrus for 2–6 days. In captivity, cows have an oestrous cycle lasting 14–15 weeks. Foetal gonads enlarge during the second half of pregnancy.

African bush elephants mate during the rainy season. Bulls in musth cover long distances in search for females and associate with large family units. They listen for the females loud, very low frequency calls and attract females by calling and by leaving trails of strong-smelling urine. Females search for bulls in musth, listen for their calls and follow their urine trails. Bulls in musth are more successful at obtaining mating opportunities than non-musth bulls. Females move away from bulls that attempt to test her estrous condition. If pursued by several bulls, they run away. Once they choose their mating partners, they stay away from other bulls that are threatened and chased away by the favoured bull. Competition between bulls overrides their choice sometimes.

The birth of a calf was observed in Tsavo East National Park in October 1990. A group of 80 elephants including eight bulls had gathered in the morning in a 150 m (490 ft) radius around the birth site. A small group of calves and females stood near the pregnant female, rumbling and flapping their ears. One cow seemed to assist her. While in labour, fluid streamed from her temporal and ear canals. She kept standing while giving birth. The newborn calf struggled to its feet within 30 minutes and walked 20 minutes later. The mother expelled the placenta about 100 minutes after birth and covered it with soil immediately. Captive-born calves weigh between 100 and 120 kg (220 and 260 lb) at birth and gain about 0.5 kg (1.1 lb) weight per day. Cows lactate for about 4.8 years. Calves exclusively suckle their mother’s milk during the first three months. Thereafter, they start feeding independently and slowly increase the time spent feeding until they are two years old. During the first three years, male calves spend more time suckling and grow faster than female calves. After this period, cows reject male calves more frequently from their nipples than female calves.

The maximum lifespan of the African bush elephant is between 70 and 75 years. Its generation length is 25 years.

This text is based on the article African bush elephant from the free encyclopedia Wikipedia and is licensed under the Creative Commons CC-BY-SA 3.0 Unported (short version). A list of the authors is available on Wikipedia.