The bontebok is a tall, medium-sized antelope. They typically stand 80 to 100 cm (31 to 39 in) high at the shoulder and measure 120 to 210 cm (47 to 83 in) along the head and body. The tail can range from 30 to 60 cm (12 to 24 in). Body mass can vary from 50 to 155 kg (110 to 342 lb). Males are slightly larger and noticeably heavier than females. The bontebok is a chocolate brown colour, with a white underside and a white stripe from the forehead to the tip of the nose, although there is a brown stripe across the white near the eyes in most blesbok. The bontebok also has a distinctive white patch around its tail (hence the Latin name), while this patch is light brown/tan in the blesbok. The horns of the bontebok are lyre-shaped and clearly ringed. They are found in both sexes and can reach a length of half a metre. Bontebok are not good jumpers, but they are very good at crawling under things. Mature males form territories and face down other males in displays and occasionally fight them. 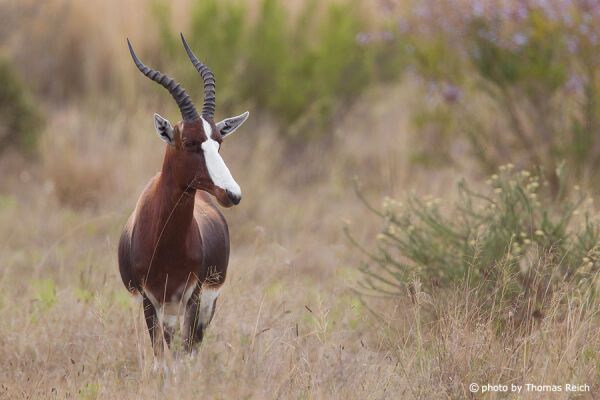 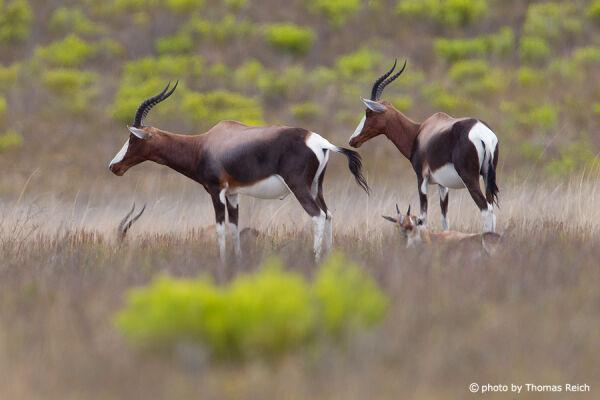 Blesbok live in the Highveld, where they eat short grasses, while bontebok are restricted to the coastal Fynbos and the Renosterveld. They are diurnal, though they rest during the heat of the day. Herds contain only males, only females, or are mixed, and do not exceed 40 animals for bonteboks or 70 for blesboks.

This text is based on the article Bontebok from the free encyclopedia Wikipedia and is licensed under the Creative Commons CC-BY-SA 3.0 Unported (short version). A list of the authors is available on Wikipedia.