Stock Photos
The African penguin (Spheniscus demersus), also known as the Cape penguin, and South African penguin, is a species of penguin confined to southern African waters. Like all extant penguins, it is flightless, with a streamlined body, and wings stiffened and flattened into flippers for a marine habitat. Adults weigh on average 2.2–3.5 kg (4.9–7.7 lb) and are 60–70 cm (24–28 in) tall. It has distinctive pink patches of skin above the eyes and a black facial mask; the body upperparts are black and sharply delineated from the white underparts, which are spotted and marked with a black band. The pink gland above their eyes helps them to cope with changing temperatures. When the temperature gets hotter, the body of the African penguin sends more blood to these glands to be cooled by the air surrounding it. This then causes the gland to turn a darker shade of pink.

The African penguin is a pursuit diver and feeds primarily on fish and squid. Once extremely numerous, the African penguin is declining rapidly due to a combination of several threats and is classified as endangered. It is a charismatic species and is popular with tourists. Other vernacular names of the species include black-footed penguin and jackass penguin, which it is called due to its loud donkey-like bray, although several related species of South American penguins produce the same sound.

African penguins grow to 60–70 cm (24–28 in) tall and weigh between 2.2–3.5 kg (4.9–7.7 lb). They have a black stripe and black spots on the chest, the pattern of spots being unique for every penguin, like human fingerprints. They have pink glands above their eyes, which are used for thermoregulation. The hotter the penguin gets, the more blood is sent to these glands so it may be cooled by the surrounding air, thus making the glands more pink. This species exhibits slight sexual dimorphism: the males are slightly larger than the females and have longer beaks. Juveniles do not possess the bold, delineated markings of the adult but instead have dark upperparts that vary from greyish-blue to brown; the pale underparts lack both spots and the band.

The beak is more pointed than that of the Humboldt. Their distinctive black and white colouring is a vital form of camouflage called countershading– white for underwater predators looking upwards and black for predators looking down onto the dark water. African penguins look similar and are thought to be related to the Humboldt, Magellanic, and Galapagos penguins. African penguins have a very recognisable appearance with a thick band of black that is in the shape of an upside-down horseshoe. They have black feet and unique black spots that vary in size and shape per penguin. Magellanic penguins share a similar characteristic that often confuses the two; Magellanics have a double bar on the throat and chest, whereas the African has a single bar. These penguins have the nickname of "jackass penguin" which comes from the loud noises they make.

The African penguin is only found on the south-western coast of Africa, living in colonies on 24 islands between Namibia and Algoa Bay, near Port Elizabeth, South Africa. It is the only penguin species that breeds in Africa and its presence gave name to the Penguin Islands.

Two colonies were established by penguins in the 1980s on the mainland near Cape Town, namely Boulders Beach near Simon's Town and Stony Point in Betty's Bay. Mainland colonies probably only became possible in recent times due to the reduction of predator numbers, although the Betty's Bay colony has been attacked by leopards. The only other mainland colony is in Namibia, but it is not known when it was established.

Boulders Beach is a tourist attraction, for the beach, swimming and the penguins. The penguins will allow people to approach them as close as a metre.

Breeding populations of African penguins are being kept in numerous zoos worldwide. No colonies are known outside the south-western coast of Africa, although vagrants (mostly juveniles) may occasionally be sighted beyond the normal range.

African penguins forage in the open sea, where they pursue pelagic fish such as sardines and anchovies (e.g. Engraulis capensis), and marine invertebrates such as squid and small crustaceans. Penguins normally swim within 20 km of the shore. A penguin may consume up to 540 grams of prey every day, but this may increase to over 1 kg when raising older chicks.

Due to the collapse of a commercial pilchard fishery in 1960, African penguin diet has shifted towards anchovies to some extent, although available pilchard biomass is still a notable determinant of penguin population development and breeding success. While a diet of anchovy appears to be generally sufficient, it is not ideal due to lower concentrations of fat and protein. Penguin diet changes throughout the year; as in many seabirds, it is believed that the interaction of diet choice and breeding success helps the penguins maintain their population size. Although parent penguins are protective of their hatchlings, they will not incur nutritional deficits themselves if prey is scarce and hunting requires greater time or energy commitment. This may lead to higher rates of brood loss under poor food conditions.

When foraging, African penguins carry out dives that on average reach a depth of 25 m and last for 69 s, although a maximum depth of 130 m and duration of 275 s has been recorded.

The African penguin is monogamous. It breeds in colonies, and pairs return to the same site each year. The African penguin has an extended breeding season, with nesting usually peaking from March to May in South Africa, and November and December in Namibia. A clutch of two eggs are laid either in burrows dug in guano, or scrapes in the sand under boulders or bushes. Incubation is undertaken equally by both parents for around 40 days. At least one parent guards the chicks for about one month, whereafter the chicks joins a crèche with other chicks, and both parents head out to sea to forage each day.

Chicks fledge at 60 to 130 days, the timing depending on environmental factors such as the quality and availability of food. The fledged chicks then go to sea on their own, where they spend the next one to nearly two years. They then return to their natal colony to molt into adult plumage.

When penguins molt, they are unable to forage as their new feathers are not yet waterproof; therefore, they fast over the entire molting period, which in African penguins takes around three weeks.

Female African penguins remain fertile for 10 years. African penguins spend most of their lives at sea until it comes time for them to lay their eggs. Due to the high predation on the mainland, African penguins will seek protection on offshore islands, where they are safer from larger mammals and natural challenges. These penguins usually breed during the winter when temperatures are lower. African penguins often will abandon their eggs if they become overheated in the hot sun. Abandoned eggs do not survive the heat. Ideally, eggs are incubated in a burrow dug into the guano layer, which provides a suitable temperature regulation, but the widespread human removal of guano deposits has rendered this type of nest unfeasible at many colonies. To compensate, penguins dig holes in the sand, breed in the open, or make use of nest boxes if such are provided. 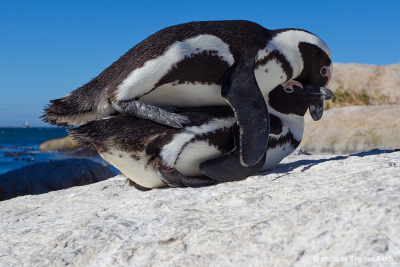 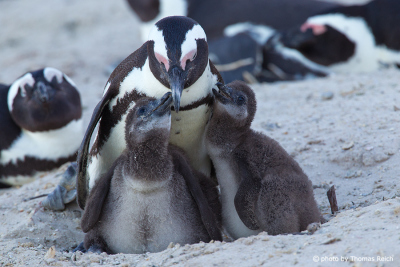 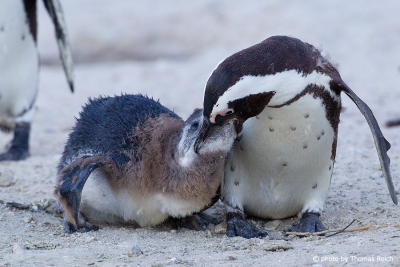 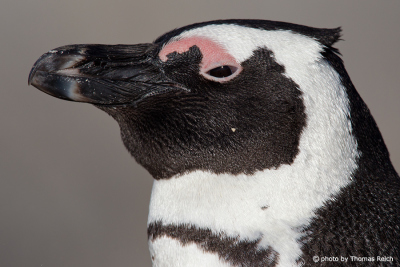 The penguins spend three weeks on land to provide for their offspring, after which chicks may be left alone during the day while the parents forage. The chicks are frequently killed by predators or succumb to the hot sun. The eggs are three to four times bigger than hen's eggs. Parents usually feed hatchlings during dusk or dawn.

In 2015, when foraging conditions were favorable, more male than female African penguin chicks were produced in the colony on Bird Island. Male chicks also had higher growth rates and fledging mass, and therefore may have higher post-fledging survival than females. This coupled with higher adult female mortality in this species may result in a male biased adult sex ratio, indicating that conservation strategies focused on benefiting female African Penguins may be necessary.

This text is based on the article African penguin from the free encyclopedia Wikipedia and is licensed under the Creative Commons CC-BY-SA 3.0 Unported (short version). A list of the authors is available on Wikipedia.