Stock Photos
Aporia crataegi, the black-veined white, is a large butterfly of the family Pieridae. A. crataegi is widespread and common. Its range extends from northwest Africa in the west to Transcaucasia and across the Palearctic to Siberia and Japan in the east. In the south, it is found in Turkey, Cyprus, Israel, Lebanon and Syria. It is not present in the British Isles and northern Scandinavia.

The black-veined white has a wingspan of 51 to 70 mm (2.0 to 2.8 in). Females are commonly larger than males. The upperside of both forewings and hindwings is a translucent white boldly veined with black. The underside is similar in the male but the female has brown veining. Moreover, the female loses most of her scales by rubbing her wings together, resulting almost-transparent.

This butterfly can be distinguished from other members of white butterflies of the genus Pieris by its distinctive veined wings.

The eggs are yellow at first, darkening with age. The caterpillars are greenish grey with transverse banding. The pupa is creamy white, marked with black, attached by a silken girdle to a twig. 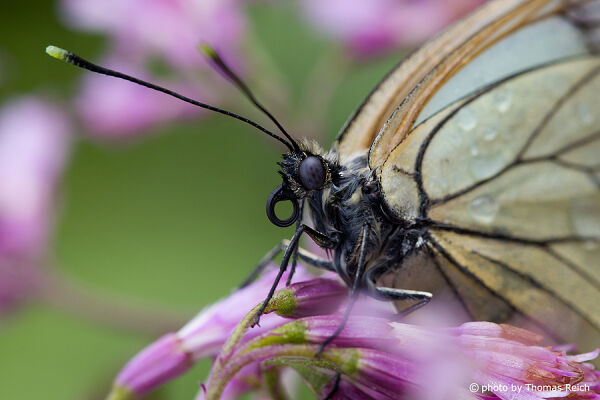 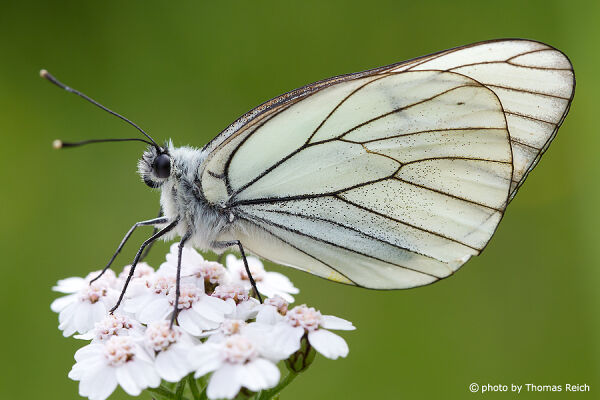 It occurs in open forest, grazing land, orchards. lanes, gardens, meadows and thickets throughout most of Europe, temperate Asia, Korea, and Japan.This species is extinct in the British Isles.

The eggs are laid in groups of 30 to 100. They take about three weeks to hatch. The caterpillars tend to remain in a group with a communal larval web. This species has one generation each year.The caterpillars overwinter communally in a webbing tent with entwined leaves. Caterpillars feed close together on the leaves of the food plant at first, before dispersing in the later developmental stages to other parts of the tree.

This text is based on the article Aporia crataegi from the free encyclopedia Wikipedia and is licensed under the Creative Commons CC-BY-SA 3.0 Unported (short version). A list of the authors is available on Wikipedia.