Stock Photos
The African oystercatcher or African black oystercatcher (Haematopus moquini), is a large charismatic wader resident to the mainland coasts and offshore islands of southern Africa. This near-threatened oystercatcher has a population of over 6,000 adults, which breed between November and April. The scientific name moquini commemorates the French naturalist Alfred Moquin-Tandon who discovered and named this species before Bonaparte.

The African oystercatcher is a large, noisy wader, with completely black plumage, red legs and a strong broad red bill. The sexes are similar in appearance, however, females are larger and have a slightly longer beak than males. Juveniles have soft grey plumage and do not express the characteristic red legs and beak until after they fledged. As the Eurasian oystercatcher is a migratory species they only occur as a vagrant in southern Africa, and its black-and-white plumage makes confusion impossible.

The lifespan of an African oystercatcher is about 35 years, of which they are known to pair up for 25 years. Although adults are rarely predated most mainland egg and chick fatalities are due to disturbance by people, off-road vehicles, dog attacks and predation by the kelp gull (Larus dominicanus) and other avian predators. Off shore pairs experience similar avian predation although most chicks perish due to starvation. 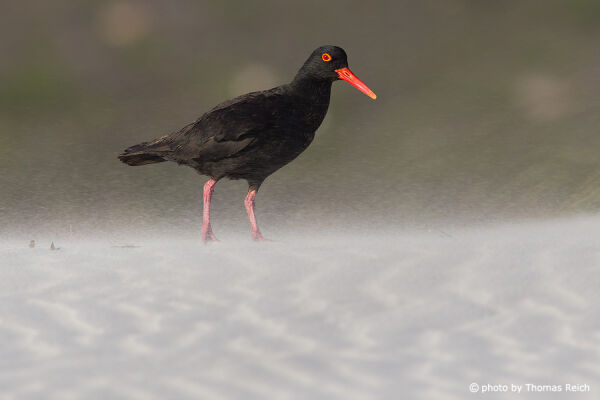 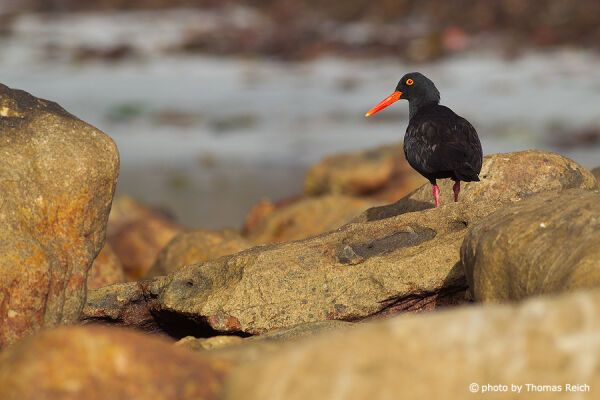 The call is a distinctive loud piping, very similar to Eurasian oystercatchers.

The African oystercatcher is native to the mainland coasts and offshore islands of Southern Africa sometimes occurring as a vagrant in Angola and Mozambique. Its breeding range extends from Lüderitz, Namibia to Mazeppa Bay, Eastern Cape, South Africa. There are estimated to be over 6,000 adult birds in total.

Typically sedentary African oystercatchers rarely leave their territories, which include a nesting site and feeding grounds. These will usually be located on or near rocky shores where they can feed.

African oystercatchers predominantly feed on molluscs such as mussels and limpets, although are known to also feed on polychaetes, insects and potentially even fish.They are adapted to pry open mussels and loosen limpets off the rocks but have been recorded picking through sand to locate other food items.

The nest is a bare scrape on pebbles, sand or shingle within about 30 metres (98 ft) of the high-water mark. On rock ledges there may be a rim of shells to keep the eggs in place. The female generally lays two eggs, but there may be one or three, which are incubated by both adults. The incubation period varies between 27 and 39 days and the young take a further 38 or so days to fledge. Breeding success is greater on offshore islands where there are few predators and less disturbance than mainland sites.

This text is based on the article African oystercatcher from the free encyclopedia Wikipedia and is licensed under the Creative Commons CC-BY-SA 3.0 Unported (short version). A list of the authors is available on Wikipedia.