Stock Photos
The red-backed shrike (Lanius collurio) is a carnivorous passerine bird and member of the shrike family Laniidae. Its breeding range stretches from Western Europe east to central Russia. It is migratory and winters in the eastern areas of tropical Africa and southern Africa.

This 16–18 cm (approx. 6.3–7.1 inches) long migratory bird. The general colour of the male's upper parts is reddish. It has a grey head and a typical shrike black stripe through the eye. Underparts are tinged pink, and the tail has a black and white pattern similar to that of a wheatear. In the female and young birds the upperparts are brown and vermiculated. Underparts are buff and also vermiculated. 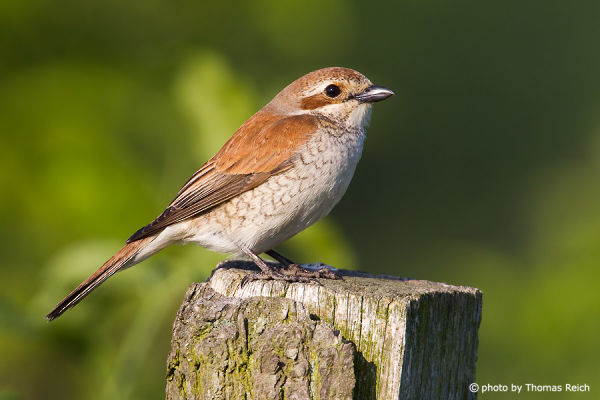 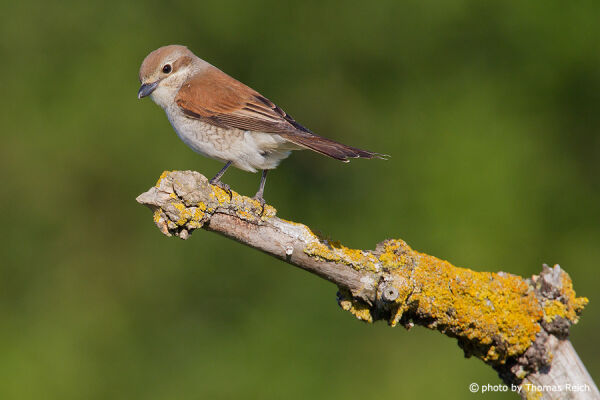 The common English name "shrike" is from Old English scríc, "shriek", referring to the shrill call.

The red-backed shrike eats large insects, small birds, frogs, rodents and lizards. Like other shrikes it hunts from prominent perches, and impales corpses on thorns or barbed wire as a "larder." This practice has earned it the nickname of "butcher bird."

This bird breeds in most of Europe and western Asia and winters in tropical Africa. The bird is listed as a "least concern" (LC) species on a global scale, but some parts of its range have seen a steep decline in numbers, so locally its status can be less secure.

This text is based on the article Red-backed shrike from the free encyclopedia Wikipedia and is licensed under the Creative Commons CC-BY-SA 3.0 Unported (short version). A list of the authors is available on Wikipedia.