Stock Photos
The Bernese Oberland (German Berner Oberland; "Bernese Highlands") is the higher part of the canton of Bern, Switzerland, in the southern end of the canton, and one of the canton's five administrative regions (in which context it is referred to as Oberland without further specification).

The region consists of the area around Meiringen and Hasliberg up to Grimsel Pass (2,164 m [7,100 ft]), around Lake Thun (558 m [1,831 ft]) and Lake Brienz, and the valleys of many high mountains with the towering Jungfrau Peak (4,158 m [13,642 ft]), the area southwest of the Lake Thun with Kandersteg (connection to the Valais) and Adelboden, and the area round Gstaad and Lenk in the Simmental. The mountain range in the Berner Oberland south of the Aare and north of the Rhône are collectively called the Bernese Alps. 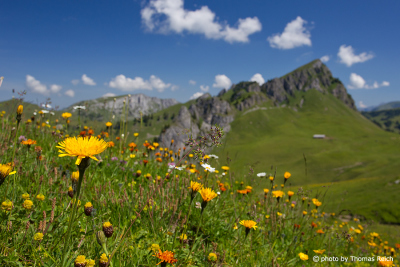 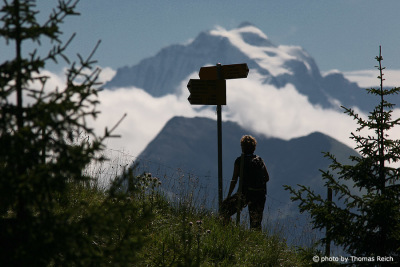 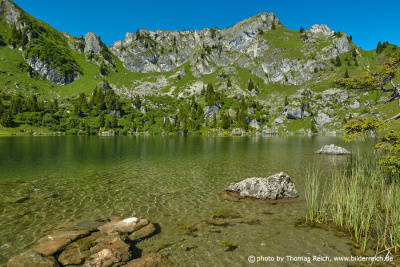 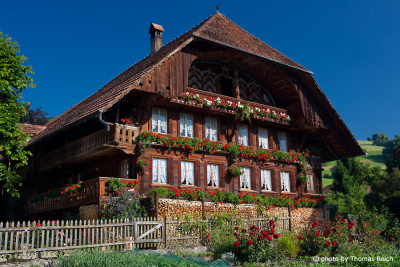 The flag of the Berner Oberland consists of a black eagle in a gold field (in reference to the region's old status as reichsfrei) over two fields in the cantonal colours of red and black.

The Swiss German dialects spoken in the Berner Oberland are Highest Alemannic German, contrasting with the High Alemannic Bernese German spoken in Bern and the northern parts of the canton.

In the short-lived Helvetic Republic (1798–1803), the Berner Oberland was a separate canton.
The Berner Oberland designates primarily an area around the upper valley of the Aare with its many larger and smaller side-valleys.

Its largest part and the Alpine part of the Aare before the river enters Lake Brienz is called the Haslital culminating on the Grimsel Pass at its southeastern corner connecting with the Goms in the Upper Valais, and Andermatt in canton of Uri (UR) via the Furka Pass. And its major side-valley, called the Gadmertal, on its most eastern point culminates at the Susten Pass just south of the Titlis (OW) connecting with the valley of the Alpine Reuss (UR), the northern part of the St. Gotthard Route. The Joch Pass to the northeast at the beginning of the Gental, a foot pass west of the Titlis connecting to the canton of Nidwalden (NW) and further down to the resort Engelberg in the canton of Obwalden (OW). North and above of Meiringen is the ski and hiking resort Hasliberg just on the other side of the ski resort Melchsee-Frutt (OW). The low Brünig Pass to the north connects Meiringen and the Haslital with the upper canton of Obwalden and further down to Central Switzerland and Lucerne (LU).

Above of Brienz on the northeastern shore of Lake Brienz soars the Brienzer Rothorn, the highest summit of the 30-kilometre-long (19 mi) prominent mountain range dominating the north shore of the Lake Brienz as far as its western end above Interlaken with the Harder. On the north side of the Brienzer Rothorn lies the resort Sörenberg in the Mariental in canton of Lucerne (LU).

South of Interlaken the short valley of the Lütschine opens to the most well-known valleys of the Bernese Highlands, namely the Lauterbrunnental to the south, and the valley of the Schwarze Lütschine to the east with Grindelwald situated just below the Eiger, Schreckhorn, and Wetterhorn. Grindelwald and Lauterbrunnen are separated by the Kleine Scheidegg pass, which is accessible from both sides via a rack railway, and which is the starting point of the Jungfrau Railway to the Jungfraujoch, a saddle between the Jungfrau and Mönch (literally, German Joch translates to yoke).

On the southeastern side of the mountain range formed by Eiger, Mönch and Jungfrau lies the head of the largest glacier of the Alps, the Aletsch Glacier, which however entirely lies on the soil of the canton of Valais (VS). Via the upper, southern end of the Lauterbrunnental the experienced hiker can reach the Kandertal by traversing the Tschingel and Kander Neve from northeast to southwest. West of the Lauterbrunnental the Schilthorn rises, separating the valley of the Weisse Lütschine from the Kiental. The Lauterbrunnen Valley is connected to the Kiental via the Sefinafurgga, a high Alpine hiking pass, and further to the Kander Valley via the Hohtürli, another high Alpine hiking pass, on the north flank of the Blümlisalp range.

Kandersteg, at the north entrance of the old Lötschberg Tunnel (1913, 14 km), which connects the Bernese Highlands with the German-speaking part of the Valais, opens up to the north to Frutigen where it is joined by the Entschligetal from the southwest, with the ski resort of Adelboden at its southern end. Adelboden and its sister resort Lenk join their respective areas to an extended and unified ski and hiking area across another mountain range. Lenk is situated at the southern end of the Obersimmental, the upper part of the Simmental, which again joins the Kander of the Kandertal just south of Spiez at the southern shore of Lake Thun after the Kander flows through the Frutigtal. Above Spiez rises the Niesen, offering a wide view over the Bernese part of the Swiss Plateau to the northwest.

Zweisimmen, still part of the Obersimmental, lies 8 kilometres (5.0 mi) south of Boltigen, the junction of the upper and lower parts of the Simmental. From Erlenbach in the Niedersimmental, the lower valley of the Simme, one can access the Stockhorn by cable cars to the west, the one summit of the Bernese Oberland with the probably most unobstructive view over the Bernese Lowlands and Thun. Not far from Erlenbach, one can access the Diemtigtal to the south with the Gsür to its very south end, also rising directly above Adelboden.

Zweisimmen also connects to Saanen and Gstaad via the small pass of Saanenmöser, with the Louwene Valley and the upper valley of the Saane south of Gstaad. After flowing northwards, in Saanen the Saane turns to the west, firstly, in order to become La Sarine in the now French-speaking canton of Vaud (VD), and secondly, opens a railway connection to Montreux at the eastern shore of Lake Geneva.

The Jaun Pass, a road pass, connects the Simmental near Reidenbach with La Gruyère, the valley when La Sarine turns north again, and the town of Bulle in the canton of Fribourg (FR), west of the Lac de la Gruyère.

North of Spiez, right across Lake Thun, on its northern shore, lies the Niederhorn, the south end of the northernmost mountain range of significant elevation of the Bernese Highlands, with the Gemmenalphorn and the Hohgant at the other end, separated by a small valley from the Harder on its southeast.

At the west end of Lake Thun, at the outlet of the river Aare, lies the town of Thun, which already belongs to the Swiss Plateau, not far from Bern to the northwest.

This text is based on the article Bernese Oberland from the free encyclopedia Wikipedia and is licensed under the Creative Commons CC-BY-SA 3.0 Unported (short version). A list of the authors is available on Wikipedia.