Stock Photos
Fire is the rapid oxidation of a material in the exothermic chemical process of combustion, releasing heat, light, and various reaction products. Fire is hot because the conversion of the weak double bond in molecular oxygen, O2, to the stronger bonds in the combustion products carbon dioxide and water releases energy (418 kJ per 32 g of O2); the bond energies of the fuel play only a minor role here. At a certain point in the combustion reaction, called the ignition point, flames are produced. The flame is the visible portion of the fire. Flames consist primarily of carbon dioxide, water vapor, oxygen and nitrogen. If hot enough, the gases may become ionized to produce plasma. Depending on the substances alight, and any impurities outside, the color of the flame and the fire's intensity will be different. 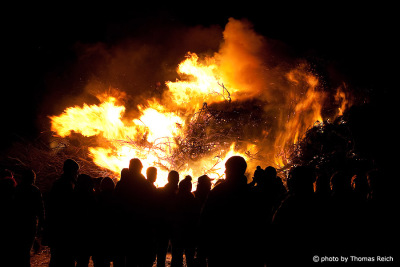 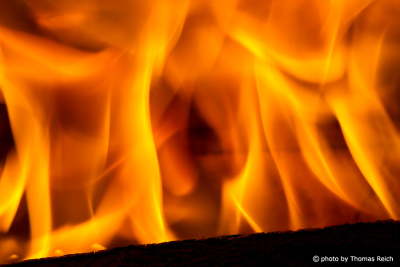 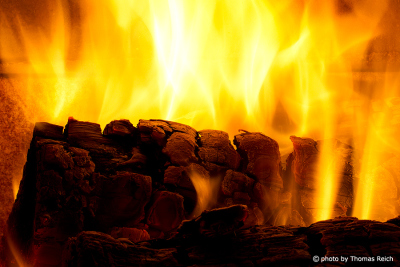 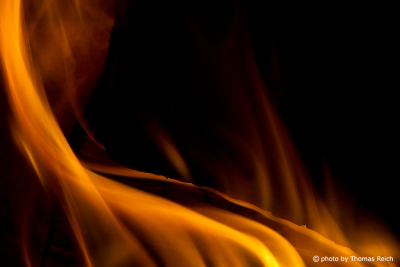 Fire in its most common form can result in conflagration, which has the potential to cause physical damage through burning. Fire is an important process that affects ecological systems around the globe. The positive effects of fire include stimulating growth and maintaining various ecological systems. Its negative effects include hazard to life and property, atmospheric pollution, and water contamination. If fire removes protective vegetation, heavy rainfall may lead to an increase in soil erosion by water. Also, when vegetation is burned, the nitrogen it contains is released into the atmosphere, unlike elements such as potassium and phosphorus which remain in the ash and are quickly recycled into the soil. This loss of nitrogen caused by a fire produces a long-term reduction in the fertility of the soil, but this fecundity can potentially be recovered as molecular nitrogen in the atmosphere is "fixed" and converted to ammonia by natural phenomena such as lightning and by leguminous plants that are "nitrogen-fixing" such as clover, peas, and green beans.

Fire has been used by humans in rituals, in agriculture for clearing land, for cooking, generating heat and light, for signaling, propulsion purposes, smelting, forging, incineration of waste, cremation, and as a weapon or mode of destruction.
Fires start when a flammable or a combustible material, in combination with a sufficient quantity of an oxidizer such as oxygen gas or another oxygen-rich compound (though non-oxygen oxidizers exist), is exposed to a source of heat or ambient temperature above the flash point for the fuel/oxidizer mix, and is able to sustain a rate of rapid oxidation that produces a chain reaction. This is commonly called the fire tetrahedron. Fire cannot exist without all of these elements in place and in the right proportions. For example, a flammable liquid will start burning only if the fuel and oxygen are in the right proportions. Some fuel-oxygen mixes may require a catalyst, a substance that is not consumed, when added, in any chemical reaction during combustion, but which enables the reactants to combust more readily.

Once ignited, a chain reaction must take place whereby fires can sustain their own heat by the further release of heat energy in the process of combustion and may propagate, provided there is a continuous supply of an oxidizer and fuel.

If the oxidizer is oxygen from the surrounding air, the presence of a force of gravity, or of some similar force caused by acceleration, is necessary to produce convection, which removes combustion products and brings a supply of oxygen to the fire. Without gravity, a fire rapidly surrounds itself with its own combustion products and non-oxidizing gases from the air, which exclude oxygen and extinguish the fire. Because of this, the risk of fire in a spacecraft is small when it is coasting in inertial flight. This does not apply if oxygen is supplied to the fire by some process other than thermal convection.

turning off the gas supply, which removes the fuel source;
covering the flame completely, which smothers the flame as the combustion both uses the available oxidizer (the oxygen in the air) and displaces it from the area around the flame with CO2;
application of water, which removes heat from the fire faster than the fire can produce it (similarly, blowing hard on a flame will displace the heat of the currently burning gas from its fuel source, to the same end), or
application of a retardant chemical such as Halon to the flame, which retards the chemical reaction itself until the rate of combustion is too slow to maintain the chain reaction.

This text is based on the article Fire from the free encyclopedia Wikipedia and is licensed under the Creative Commons CC-BY-SA 3.0 Unported (short version). A list of the authors is available on Wikipedia.