Stock Photos
The taiga bean goose (Anser fabalis) is a goose that breeds in northern Europe and Asia. This and the tundra bean goose are recognised as separate species by the American Ornithological Society and the International Ornithologists' Union, but are considered a single species by other authorities (collectively called bean goose). It is migratory and winters further south in Europe and Asia. The taiga and tundra bean goose diverged about 2.5 million years ago and established secondary contact ca. 60,000 years ago, resulting in extensive gene flow. 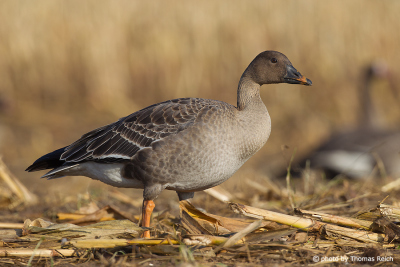 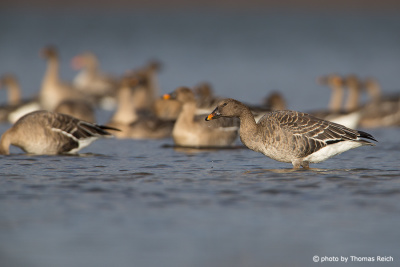 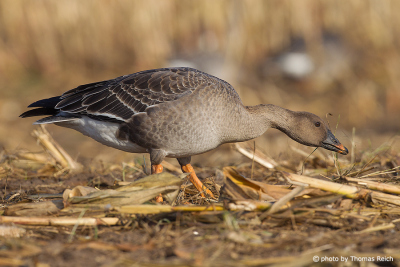 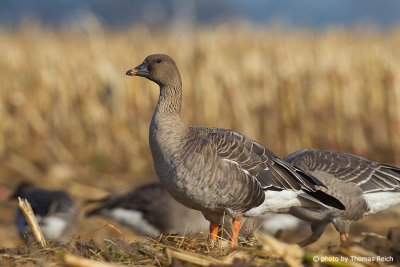 The closely related pink-footed goose (A. brachyrhynchus) has the bill short, bright pink in the middle, and the feet also pink, the upper wing-coverts being nearly of the same bluish-grey as in the greylag goose. In size and bill structure, it is very similar to Anser fabalis rossicus, and in the past was often treated as a sixth subspecies of bean goose.

The voice is a loud honking, higher pitched in the smaller subspecies.

The taiga bean goose is a rare winter visitor to Britain. There are two regular wintering flocks of taiga bean goose, in the Yare Valley, Norfolk and the Avon Valley, Scotland. A formerly regular flock in Dumfries and Galloway no longer occurs there.

The taiga bean geese Anser fabalis fabalis wintering in Europe are considered to migrate across three different flyways: Western, Central and Eastern; which has been confirmed by stable isotope analysis of their flight feathers.

This text is based on the article Taiga bean goose from the free encyclopedia Wikipedia and is licensed under the Creative Commons CC-BY-SA 3.0 Unported (short version). A list of the authors is available on Wikipedia.