Stock Photos
The common moorhen (Gallinula chloropus), also known as the waterhen or swamp chicken, is a bird species in the rail family (Rallidae). It is distributed across many parts of the Old World.

The common moorhen lives around well-vegetated marshes, ponds, canals and other wetlands. The species is not found in the polar regions or many tropical rainforests. Elsewhere it is likely the most common rail species, except for the Eurasian coot in some regions.

The closely related common gallinule of the New World has been recognized as a separate species by most authorities, starting with the American Ornithologists' Union and the International Ornithological Committee in 2011.

The moorhen is a distinctive species, with dark plumage apart from the white undertail, yellow legs and a red frontal shield. The young are browner and lack the red shield. The frontal shield of the adult has a rounded top and fairly parallel sides; the tailward margin of the red unfeathered area is a smooth waving line. In the related common gallinule of the Americas, the frontal shield has a fairly straight top and is less wide towards the bill, giving a marked indentation to the back margin of the red area. A midsized to large rail, it can range from 30 to 38 cm (12 to 15 in) in length and span 50 to 62 cm (20 to 24 in) across the wings. The body mass of this species can range from 192 to 500 g (6.8 to 17.6 oz). 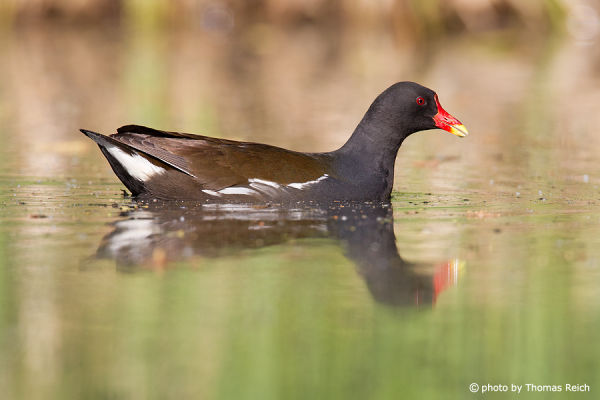 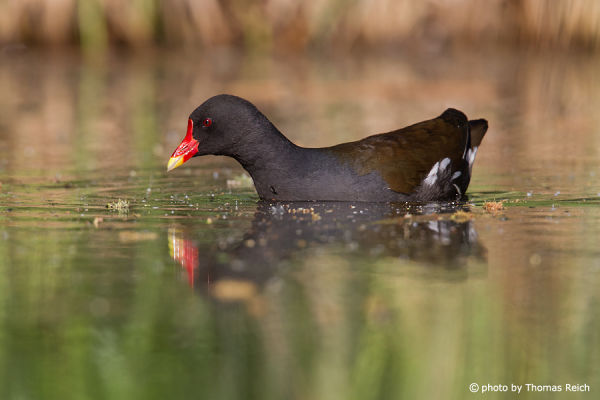 The common moorhen gives a wide range of gargling calls and will emit loud hisses when threatened.

This is a common breeding bird in marsh environments, well-vegetated lakes and even in city parks. Populations in areas where the waters freeze, such as eastern Europe, will migrate to more temperate climates. In China, common moorhen populations are largely resident south of the Yangtze River, whilst northern populations migrate in the winter, therefore these populations show high genetic diversity.

This species will consume a wide variety of vegetable material and small aquatic creatures. They forage beside or in the water, sometimes walking on lilypads or upending in the water to feed. They are often secretive, but can become tame in some areas. Despite loss of habitat in parts of its range, the common moorhen remains plentiful and widespread.

The birds are territorial during breeding season. The nest is a basket built on the ground in dense vegetation. Laying starts in spring, between mid-March and mid-May in Northern hemisphere temperate regions. About 8 eggs are usually laid per female early in the season; a brood later in the year usually has only 5–8 or fewer eggs. Nests may be re-used by different females. Incubation lasts about three weeks. Both parents incubate and feed the young. These fledge after 40–50 days, become independent usually a few weeks thereafter, and may raise their first brood the next spring. When threatened, the young may cling to the parents' body, after which the adult birds fly away to safety, carrying their offspring with them. 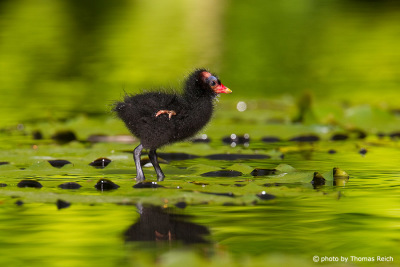 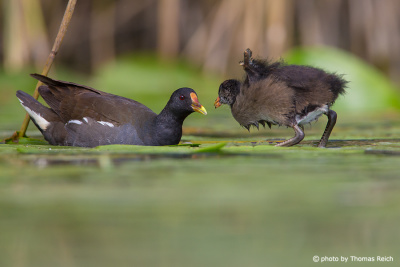 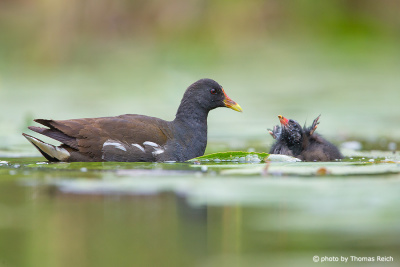 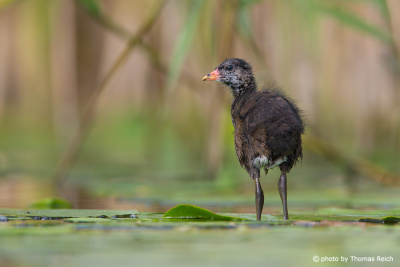 This text is based on the article Common moorhen from the free encyclopedia Wikipedia and is licensed under the Creative Commons CC-BY-SA 3.0 Unported (short version). A list of the authors is available on Wikipedia.