Stock Photos
The sandhill crane (Antigone canadensis) is a species of large crane of North America and extreme northeastern Siberia. The common name of this bird refers to habitat like that at the Platte River, on the edge of Nebraska's Sandhills on the American Plains. This is the most important stopover area for the nominotypical subspecies, the lesser sandhill crane (Antigone canadensis canadensis), with up to 450,000 of these birds migrating through annually.

The sandhill crane was formerly placed in the genus Grus, but a molecular phylogenetic study published in 2010 found that the genus, as then defined, was polyphyletic. In the resulting rearrangement to create monophyletic genera, four species, including the sandhill crane, were placed in the resurrected genus Antigone that had originally been erected by the German naturalist Ludwig Reichenbach in 1853. The specific epithet canadensis is the modern Latin word for "Canadian".

Adults are gray overall; during breeding, their plumage is usually much worn and stained, particularly in the migratory populations, and looks nearly ochre. The average weight of the larger males is 4.57 kg (10.1 lb), while the average weight of females is 4.02 kg (8.9 lb), with a range of 2.7 to 6.7 kg (6.0 to 14.8 lb) across the subspecies. Sandhill cranes have red foreheads, white cheeks, and long, dark, pointed bills. In flight, their long, dark legs trail behind, and their long necks keep straight. Immature birds have reddish-brown upperparts and gray underparts. 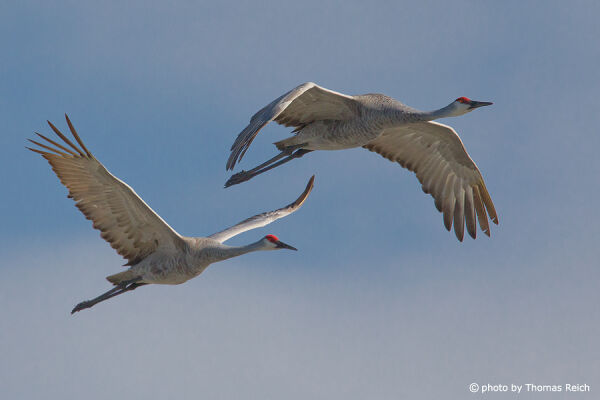 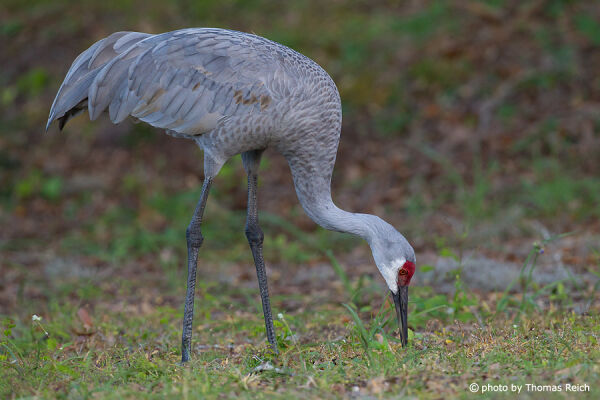 Sandhill cranes' large wingspans, typically 1.65 to 2.30 m (5 ft 5 in to 7 ft 7 in), make them very skilled soaring birds, similar in style to hawks and eagles. Using thermals to obtain lift, they can stay aloft for many hours, requiring only occasional flapping of their wings, thus expending little energy. Migratory flocks contain hundreds of birds, and can create clear outlines of the normally invisible rising columns of air (thermals) they ride.

These cranes frequently give a loud, trumpeting call that suggests a rolled "r" in the throat, and they can be heard from a long distance. Mated pairs of cranes engage in "unison calling". The cranes stand close together, calling in a synchronized and complex duet. The female makes two calls for every one from the male.

Sandhill cranes are fairly social birds that usually live in pairs or family groups through the year. During migration and winter, unrelated cranes come together to form "survival groups" that forage and roost together. Such groups often congregate at migration and winter sites, sometimes in the thousands.

Sandhill cranes fly south for the winter. In their wintering areas, they form flocks over 10,000. One place this happens is at Bosque del Apache National Wildlife Refuge, 100 mi (160 km) south of Albuquerque, New Mexico. An annual Sandhill Crane Festival is held there in November.

Sandhill cranes are mainly herbivorous, but eat various types of food, depending on availability. They often feed with their bills down to the ground as they root around for seeds and other foods, in shallow wetlands with vegetation or various upland habitats. Cranes readily eat cultivated foods such as corn, wheat, cottonseed, and sorghum. Waste corn is useful to cranes preparing for migration, providing them with nutrients for the long journey. Among northern races of sandhill cranes, the diet is most varied, especially among breeding birds. They variously feed on berries, small mammals, insects, snails, reptiles, and amphibians.

Sandhill cranes raise one brood per year. In nonmigratory populations, laying begins between December and August. In migratory populations, laying usually begins in April or May. Both members of a breeding pair build the nest using plant material from the surrounding area. Nest sites are usually marshes, bogs, or swales, though occasionally on dry land. Females lay one to three (usually two) oval, dull brown eggs with reddish markings. Both parents incubate the eggs for about 30 days.

The chicks are precocial; they hatch covered in down, with their eyes open, and able to leave the nest within a day. The parents brood the chicks for up to three weeks after hatching, feeding them intensively for the first few weeks, then gradually less frequently until they reach independence at 9 to 10 months old.

The chicks remain with their parents until one to two months before the parents lay the next clutch of eggs the following year, remaining with them 10–12 months. After leaving their parents, the chicks form nomadic flocks with other juveniles and nonbreeders. They remain in these flocks until they form breeding pairs at between two and seven years old.

This text is based on the article Sandhill crane from the free encyclopedia Wikipedia and is licensed under the Creative Commons CC-BY-SA 3.0 Unported (short version). A list of the authors is available on Wikipedia.