Stock Photos
Amrum About this soundpronunciation (help·info) (Öömrang North Frisian: Oomram) is one of the North Frisian Islands on the German North Sea coast, south of Sylt and west of Föhr. It is part of the Nordfriesland district in the federal state of Schleswig-Holstein and has approximately 2,300 inhabitants.

The island is made up of a sandy core of geestland and features an extended beach all along its west coast, facing the open North Sea. The east coast instead borders to mud flats and tidal creeks of the Wadden Sea. Sand dunes are a characteristical part of Amrum's landscape, resulting in a vegetation that is largely made up of heath and shrubs. The island's only forest was planted in 1948. Amrum is a refuge for many species of birds and a number of marine mammals like grey seal or harbour porpoise.

Settlements on Amrum have been traced back to the Neolithic when the area was still a part of the mainland of the Jutland peninsula. During the Middle Ages, Frisian settlers arrived at Amrum and engaged in salt making and seafaring. A part of the modern population still speaks Öömrang, a dialect of the North Frisian language, and Frisian traditions are kept alive.

With the island hosting many endangered species of plants and animals, its soil being largely unfavourable for agriculture and as a popular seaside resort in general, Amrum's population today almost exclusively lives from the tourism industry. 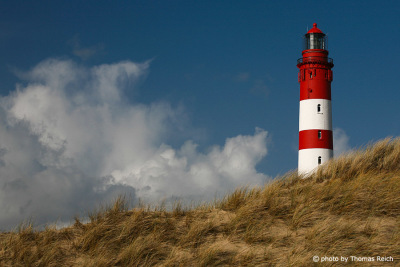 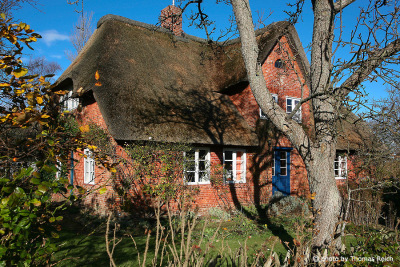 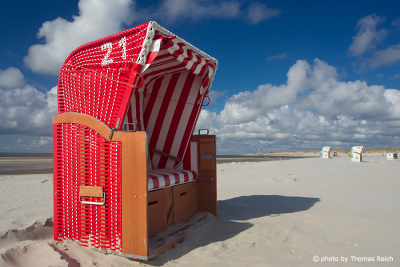 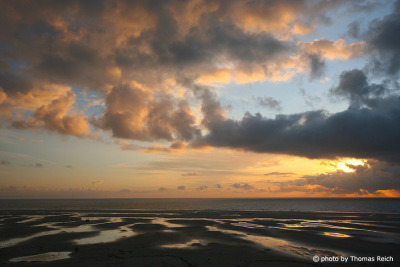 Amrum's area measures 20,4 km2, making it the tenth-largest island of Germany (excluding Usedom which is partly Polish territory). Adding the large Kniepsand beach on the Western shore to the surface area results in a total area of c. 30 km2. Amrum's surface area has however been subject to constant change due to land loss and gain caused by the sea. During the 19th century, a 20th part of the area recorded in the beginning of the century had been lost, but in 1913, a net gain was again recorded at the Kniepsand.

Amrum is one of three isles with a geestland core in Nordfriesland. This sandy core is made up of glacial deposits from the Saalian glacial period. To the east, it borders to the Wadden Sea mud flats of the North Sea. The east side is also where the island's ancient hamlets are situated: Norddorf, Nebel, Süddorf and Steenodde. On the geestland core, one can find extended areas of heath and woodland which form a strip that runs along a north-south line on the axis. West of this woodland strip, a region of 838 hectares (2,070 acres) is covered with dunes that run all along the island for about 12 km. The maximal width of this area amounts to more than a kilometre. Amrum's tallest dune near Norddorf is called a Siatler (the settling dune); it reaches 32 m of height. Northward, the dune area extends into a small peninsula called Odde. In the south of Amrum, the newest settlement, Wittdün, is located. West of the dunes, the entire shore of Amrum is made up of the Kniepsand beach; it counts among northern Europe's largest sand beaches. North of Norddorf there is some marshland, another small marsh area can be found between Süddorf and Steenodde. Both of them are protected from the sea by dikes. During low tide it is possible to reach the neighbouring island of Föhr by mudflat hiking.

Amrum's population amounts to about 2,300 and the island is divided into three municipalities: Norddorf, Nebel and Wittdün. They adhere to the Amt Föhr-Amrum.

The northernmost settlement is the seaside resort of Norddorf with a decoy pond and a sector light. Amrum's largest village, Nebel, is located near the eastern coastline. Notable sights there include the church of St. Clement with its "talking gravestones", the Öömrang Hüs - a museum of local history, a wind mill and the Cemetery of the Homeless. Süddorf, today a district of Nebel, is the island's oldest hamlet. The Amrum Lighthouse is located there. Steenodde, also a neighbourhood of Nebel, had long been Amrum's only port until Wittdün, founded 1890, had taken over as the island's major ferry terminal. Of the three municipalities, Wittdün is most clearly influenced by tourism.

This text is based on the article Amrum from the free encyclopedia Wikipedia and is licensed under the Creative Commons CC-BY-SA 3.0 Unported (short version). A list of the authors is available on Wikipedia.